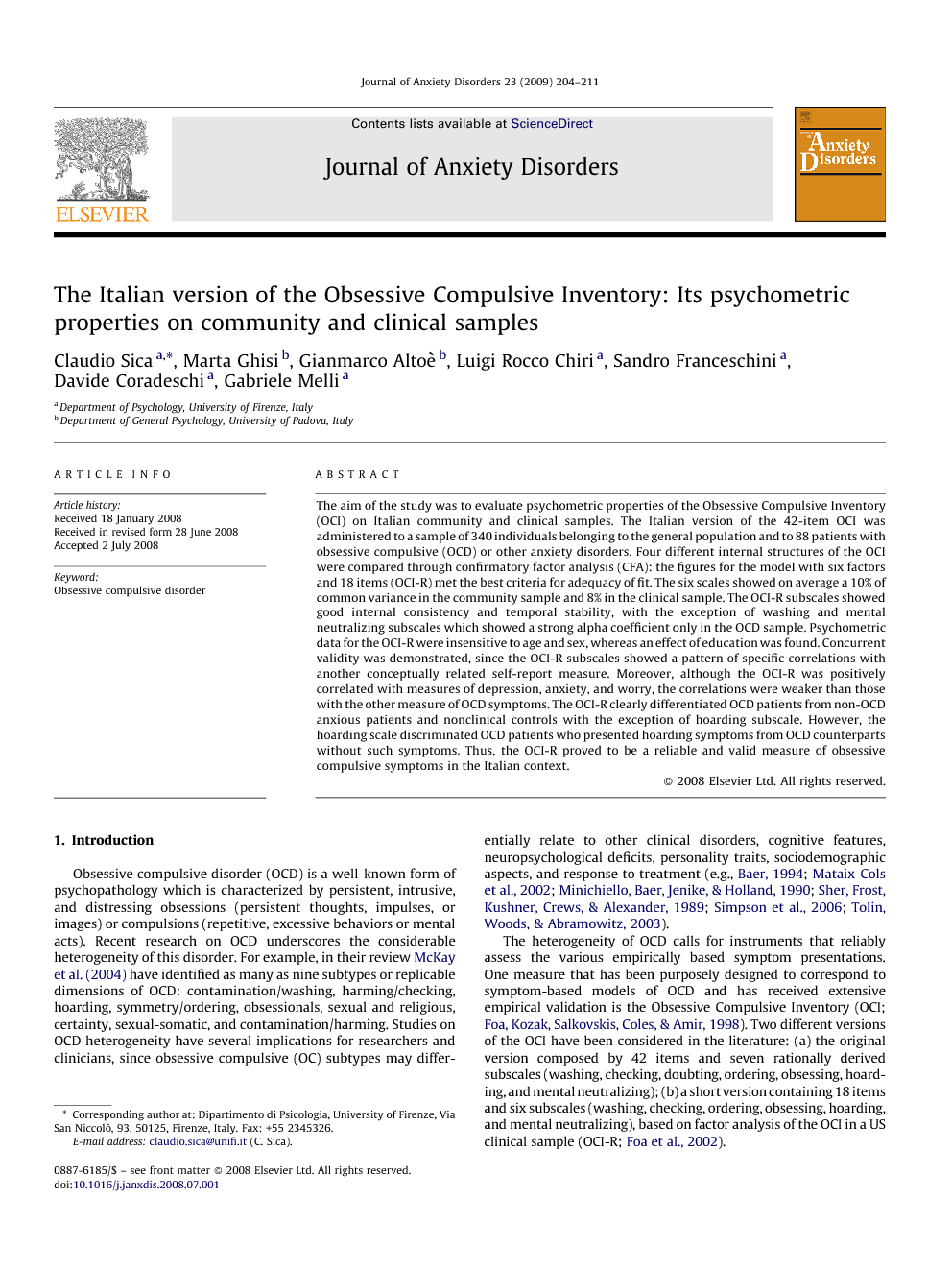 The aim of the study was to evaluate psychometric properties of the Obsessive Compulsive Inventory (OCI) on Italian community and clinical samples. The Italian version of the 42-item OCI was administered to a sample of 340 individuals belonging to the general population and to 88 patients with obsessive compulsive (OCD) or other anxiety disorders. Four different internal structures of the OCI were compared through confirmatory factor analysis (CFA): the figures for the model with six factors and 18 items (OCI-R) met the best criteria for adequacy of fit. The six scales showed on average a 10% of common variance in the community sample and 8% in the clinical sample. The OCI-R subscales showed good internal consistency and temporal stability, with the exception of washing and mental neutralizing subscales which showed a strong alpha coefficient only in the OCD sample. Psychometric data for the OCI-R were insensitive to age and sex, whereas an effect of education was found. Concurrent validity was demonstrated, since the OCI-R subscales showed a pattern of specific correlations with another conceptually related self-report measure. Moreover, although the OCI-R was positively correlated with measures of depression, anxiety, and worry, the correlations were weaker than those with the other measure of OCD symptoms. The OCI-R clearly differentiated OCD patients from non-OCD anxious patients and nonclinical controls with the exception of hoarding subscale. However, the hoarding scale discriminated OCD patients who presented hoarding symptoms from OCD counterparts without such symptoms. Thus, the OCI-R proved to be a reliable and valid measure of obsessive compulsive symptoms in the Italian context.

Obsessive compulsive disorder (OCD) is a well-known form of psychopathology which is characterized by persistent, intrusive, and distressing obsessions (persistent thoughts, impulses, or images) or compulsions (repetitive, excessive behaviors or mental acts). Recent research on OCD underscores the considerable heterogeneity of this disorder. For example, in their review McKay et al. (2004) have identified as many as nine subtypes or replicable dimensions of OCD: contamination/washing, harming/checking, hoarding, symmetry/ordering, obsessionals, sexual and religious, certainty, sexual-somatic, and contamination/harming. Studies on OCD heterogeneity have several implications for researchers and clinicians, since obsessive compulsive (OC) subtypes may differentially relate to other clinical disorders, cognitive features, neuropsychological deficits, personality traits, sociodemographic aspects, and response to treatment (e.g., Baer, 1994; Mataix-Cols et al., 2002; Minichiello, Baer, Jenike, & Holland, 1990; Sher, Frost, Kushner, Crews, & Alexander, 1989; Simpson et al., 2006; Tolin, Woods, & Abramowitz, 2003). The heterogeneity of OCD calls for instruments that reliably assess the various empirically based symptom presentations. One measure that has been purposely designed to correspond to symptom-based models of OCD and has received extensive empirical validation is the Obsessive Compulsive Inventory (OCI; Foa, Kozak, Salkovskis, Coles, & Amir, 1998). Two different versions of the OCI have been considered in the literature: (a) the original version composed by 42 items and seven rationally derived subscales (washing, checking, doubting, ordering, obsessing, hoarding, and mental neutralizing); (b) a short version containing 18 items and six subscales (washing, checking, ordering, obsessing, hoarding, and mental neutralizing), based on factor analysis of the OCI in a US clinical sample (OCI-R; Foa et al., 2002). Several reports provided support for the reliability and validity of the OCI and OCI-R and showed strong convergence with established measures of OCD, moderate to high internal consistency across the various subscales, and adequate to high test–retest stability depending on the time interval (e.g., Abramowitz & Deacon, 2006; Huppert et al., 2007; Simonds, Thorpe, & Elliott, 2000). The internal structure of the OCI-R has been replicated in multiple languages including French (Zermatten, Van-der-Linden, Jermann, & Ceschi, 2006), German (Gonner, Leonhart, & Ecker, 2008), Icelandick (Smari, Olason, Eythorsdottir, & Frolunde, 2007), and Spanish (Fullana et al., 2005), whereas only one study concerned the factorial composition of the original OCI (Wu & Watson, 2003). In this study, based on a factor analysis in American undergraduate students, the authors suggested that a five-factor structure, rather than the seven rationally derived subscales, best captured the structure of symptoms measured by the OCI. In addition, Foa et al. (2002) also suggested that the proposed seven-factor structure of the original OCI may be in question. In sum, what emerges from the literature is that the OCI-R is a robust measure of OC symptoms, whereas more studies are warranted for the OCI. On the other hand, the brevity of the OCI-R subscales (three items for each of the six dimensions) is of concern for some scholars (Clark, Antony, Beck, Swinson, & Steer, 2005), even though the OCI itself contains two dimensions composed by three items (hoarding and doubting). As such, it could be worthwhile examining both the long and short version of the questionnaire within the same study. To our knowledge, no studies have been conducted to compare the OCI and the OCI-R in a cultural context outside the US. Actually, if the OCI-R should show a stronger factor structure than OCI and good psychometric characteristics, then it would be possible to conclude that OCD may not vary substantially cross-culturally in this regard, and also may provide support for the use of the subscales of the OCI-R over the OCI. On the contrary, if a different picture would emerge (i.e., no substantial differences between the two versions or stronger characteristics of the OCI over the OCI-R), then potential cultural differences that may lead to this may be discussed. The main purpose of the present study was therefore to evaluate the psychometric properties of both the OCI and the OCI-R on Italian community and clinical samples. Virtually no studies have tested the psychometric properties of the OCI and OCI-R on community samples, a surprising omission given theoretical assumptions that OC phenomena lie on a continuum from normality to psychopathology (e.g., Burns, Formea, Keortge, & Sternberger, 1995; Salkovskis & Harrison, 1984; Sterneberger & Burns, 1990). The OCI itself was devised to “provide an instrument that can be readily administered to both clinical and non-clinical populations” (Foa et al., 1998, p. 207). A large community sample permits study of the factor structure of the OCI, convergent and divergent validity, and examination of possible gender, age, and education effects on OCI total and subscale scores. Regarding this last issue, we hypothesized no differences in age and gender because several studies on self-reported obsessional features showed no differences across these characteristics (Kyrios, Bhar, & Wade, 1996; MacDonald & De Silva, 1999; Sterneberger & Burns, 1990). Lastly, the clinical samples permit to evaluate the criterion-oriented and discriminant validity of the Italian version of the OCI.