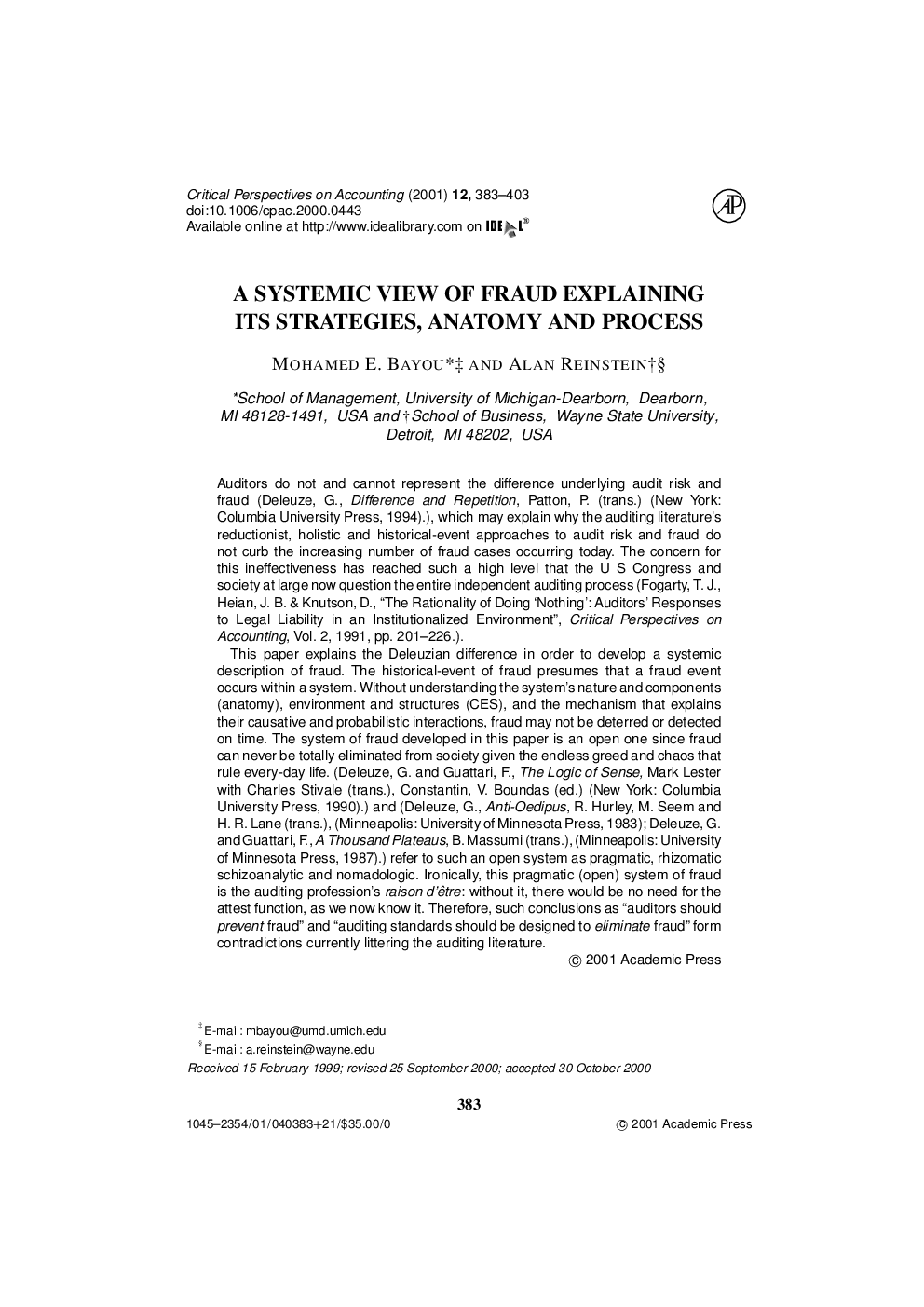 Auditors do not and cannot represent the difference underlying audit risk and fraud (Deleuze, G.,Difference and Repetition , Patton, P. (trans.) (New York: Columbia University Press, 1994).), which may explain why the auditing literature’s reductionist, holistic and historical-event approaches to audit risk and fraud do not curb the increasing number of fraud cases occurring today. The concern for this ineffectiveness has reached such a high level that the U S Congress and society at large now question the entire independent auditing process (Fogarty, T. J., Heian, J. B. & Knutson, D., “The Rationality of Doing ‘Nothing’: Auditors’ Responses to Legal Liability in an Institutionalized Environment", Critical Perspectives on Accounting, Vol. 2, 1991, pp. 201–226.). This paper explains the Deleuzian difference in order to develop a systemic description of fraud. The historical-event of fraud presumes that a fraud event occurs within a system. Without understanding the system’s nature and components (anatomy), environment and structures (CES), and the mechanism that explains their causative and probabilistic interactions, fraud may not be deterred or detected on time. The system of fraud developed in this paper is an open one since fraud can never be totally eliminated from society given the endless greed and chaos that rule every-day life. (Deleuze, G. and Guattari, F., The Logic of Sense, Mark Lester with Charles Stivale (trans.), Constantin, V. Boundas (ed.) (New York: Columbia University Press, 1990).) and (Deleuze, G., Anti-Oedipus, R. Hurley, M. Seem and H. R. Lane (trans.), (Minneapolis: University of Minnesota Press, 1983); Deleuze, G. and Guattari, F., A Thousand Plateaus, B. Massumi (trans.), (Minneapolis: University of Minnesota Press, 1987).) refer to such an open system as pragmatic, rhizomatic schizoanalytic and nomadologic. Ironically, this pragmatic (open) system of fraud is the auditing profession’s raison d’être: without it, there would be no need for the attest function, as we now know it. Therefore, such conclusions as “auditors should prevent fraud" and “auditing standards should be designed to eliminate fraud" form contradictions currently littering the auditing literature.