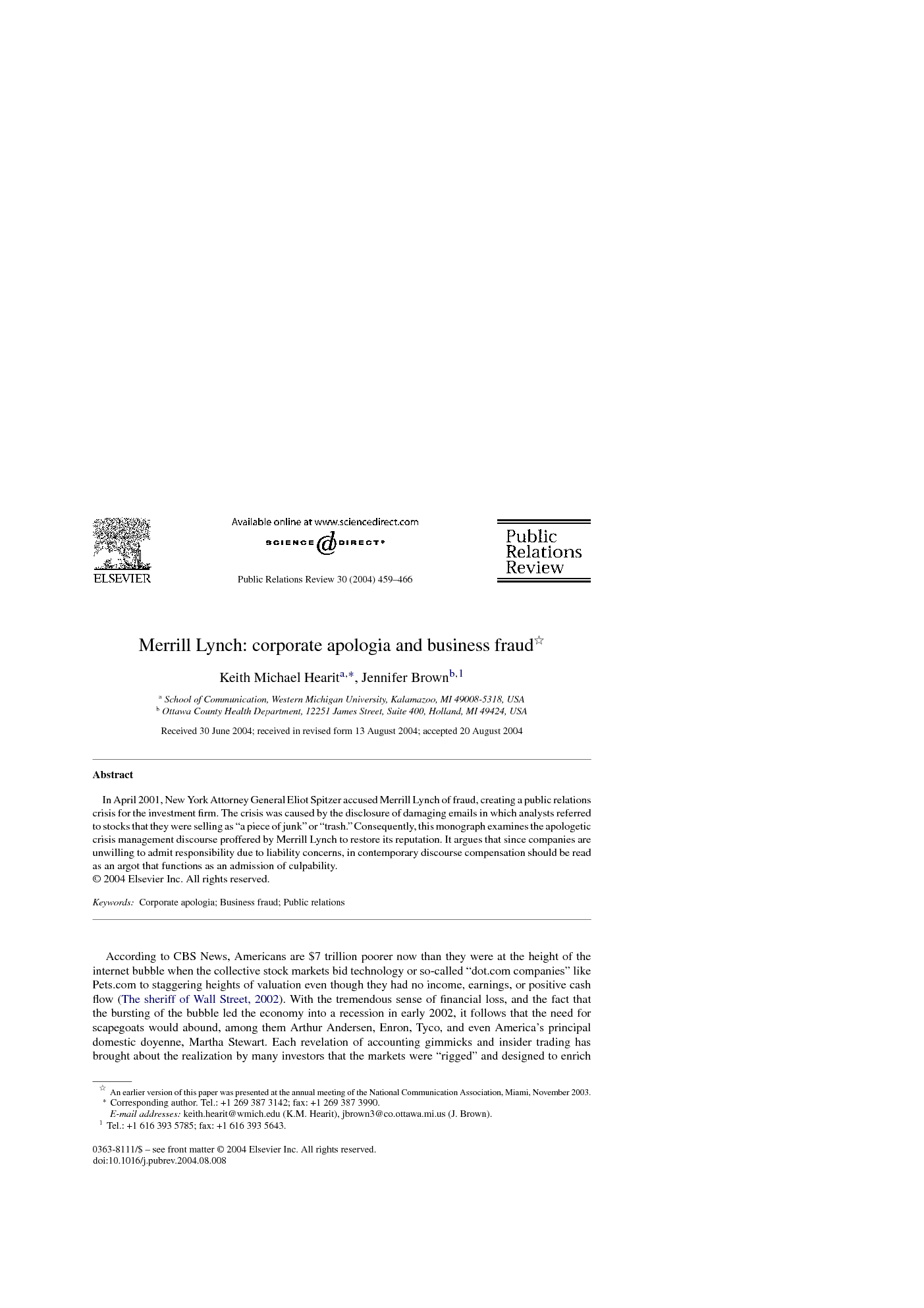 In April 2001, New York Attorney General Eliot Spitzer accused Merrill Lynch of fraud, creating a public relations crisis for the investment firm. The crisis was caused by the disclosure of damaging emails in which analysts referred to stocks that they were selling as “a piece of junk” or “trash.” Consequently, this monograph examines the apologetic crisis management discourse proffered by Merrill Lynch to restore its reputation. It argues that since companies are unwilling to admit responsibility due to liability concerns, in contemporary discourse compensation should be read as an argot that functions as an admission of culpability.

According to CBS News, Americans are $7 trillion poorer now than they were at the height of the internet bubble when the collective stock markets bid technology or so-called “dot.com companies” like Pets.com to staggering heights of valuation even though they had no income, earnings, or positive cash flow (The sheriff of Wall Street, 2002). With the tremendous sense of financial loss, and the fact that the bursting of the bubble led the economy into a recession in early 2002, it follows that the need for scapegoats would abound, among them Arthur Andersen, Enron, Tyco, and even America's principal domestic doyenne, Martha Stewart. Each revelation of accounting gimmicks and insider trading has brought about the realization by many investors that the markets were “rigged” and designed to enrich insiders, while individual investors and holders of 401Ks were perennially on the outside—and easy targets for abuse. Eventually, the revelations of wrongdoing reached to the heart of Wall Street. In April 2001, Eliot Spitzer, Attorney General of New York, using his authority under the Martin Act, announced he had opened an investigation of fraud at Merrill Lynch, one of Wall Street's oldest and most venerable firms. In it, he accused the firm of recommending the purchase of poorly performing stocks to individual investors which enabled Merrill Lynch to win or retain lucrative investment banking fees for those same companies—thus dramatically increasing the impact on the firm's bottom line (White, 2002). The investigation plunged the organization into a public relations crisis. As it continued and the ongoing revelations continued to dog the firm, Merrill Lynch chose to settle rather than fight the allegations any longer. In May 2002, Attorney General Spitzer announced a settlement: Merrill Lynch would apologize for the wrongdoing, pay a $100 million fine, as well as change the way that analysts are compensated (White, 2002). It is our position that this case is paradigmatic of the problems inherent in modern apologetic speech in that, when presented with clear evidence of wrongdoing, the Wall Street giant initially responded with a denial and counter-attack; and once it became clear that the allegations would not go away, it then completed a settlement with its accusers in which it offered a weak statement of regret followed by the paying of a large fine. Specifically, we argue that Merrill Lynch's communicative choices reflect efforts to appear apologetic to public constituencies while at the same time avoiding legal liability. To support this claim, we first review the research on corporate apologia; second, we survey the narrative that constituted the crisis; third, we offer analysis that considers the multiple strategies utilized by the firm to account for its wrongdoing; and finally, we draw a number of conclusions as to the role of apologia as used by financial firms.

“Successful” apologia function to bring absolution on two levels. First is the understanding that the apologist has to justify his or her behavior; in other words, articulate his or her association to the alleged offense and deliver an apologia. Second is the recognition that the apologia is more than words: the apologist must show “proper regard for the process of correction” (Goffman, 1971, p. 100). By doing so, critics are able to judge the degree to which the apologist respects and pays attention to the symbolic and ritualistic dimensions of justificatory discourse. Yet when one considers the apologetic discourse offered by the senior officials in charge of Merrill Lynch, it follows that such efforts at apology were failures on both counts. First, Merrill Lynch officials’ explanations were woefully inadequate and serve as clear examples of corporate doublespeak. When presented with incontrovertible evidence in the form of very embarrassing emails, the firm nevertheless proceeded with a denial, claiming the emails were misunderstood and that the Attorney General did not understand how the securities business worked. When the company finally did issue an apology it did so in a manner in which it assumed little if any responsibility for its actions: It appeared to be sorry that the emails were brought to light instead of sorry for the deception. The New York Times called the substance of Merrill Lynch's defense “silly”(Merrill Lynch's Deal, 2002, p. A26). Second, Merrill Lynch showed little regard for the process of correction. The firm did not care about repairing relationships with its investors. Indeed, it appears as if the apologetic process, which came only through news accounts and not through a published apology as is the apologetic norm (Hearit, 2001), seemed designed to be overlooked. Furthermore, the apology was delivered by a chief executive who was soon to exit the firm, thus providing a scapegoat on which to heap any outstanding guilt. The apparent reason for such a weak apology by the brokerage firm is the concerns about liability the firm would face if it directly assumed responsibility for the wrongdoing. The role of liability in contemporary apologetic discourse as studied by organizational critics is, like the proverbial crazy aunt who lives in the basement, ever present but seldom discussed. Tyler (1997), in an insightful study, has concluded that while it is the personal impulse of corporate officials to respond to public and media pressure to come clean and apologize, it is their fear of exposing their companies to liability concerns that prohibits them from doing so. The manner in which such executives extricate themselves from such a position typically results in the use of equivocal communication in which a company denies having committed a wrong, but promises never to do it again (Tyler). Yet, if Merrill Lynch only expressed regret that misunderstood yet damaging emails had come to the fore and that people had unfortunately lost huge sums of money in the technology sector, the question follows as to why the company was forced by the Attorney General to pay a $100 million fine. Such a point brings us to the primary conclusion of this paper. Due to liability concerns, modern corporate officers only offer weak statements of regret for what happened without assuming responsibility (Hearit, 1995). The assumption of responsibility occurs when organizations offer compensation to victims or assent to pay fines or restitution. Said another way, due to liability concerns, in its current form in contemporary apologetic speech, the acknowledgement of wrongdoing lies not in the apology but in the compensation. This is what the Attorney General meant when he said “You don’t pay a $100 million fine if you didn’t do anything wrong” (McGeehan, 2002h, p. A1). While compensation is a way in which a company pays for a problem to “go away” (Benoit, 1995), it also functions as a form of “proportional humiliation” which is strikingly similar to the humbling process through which one has to go through when apologizing (Courtright & Hearit, 2002). This study has examined the apologetic efforts of Merrill Lynch after New York State Attorney General Eliot Spitzer accused the large Wall Street firm of fraud. In so doing, it argues that the apologetic exchange featured an attempt to appear apologetic for public relations purposes while avoiding legal liability. Yet it should be noted that the biggest loser in the hyping of buy recommendations was the individual investor. While said individuals were the Attorney's General reason for investigating Merrill Lynch—serving their interest and by extension the public interest, it was the small, individual investor who was left out of the settlement–for the $100 million fine went to the treasury of the State of New York and other states who were party to the agreements, leaving individual investors with the impression, once again, that the game was rigged.