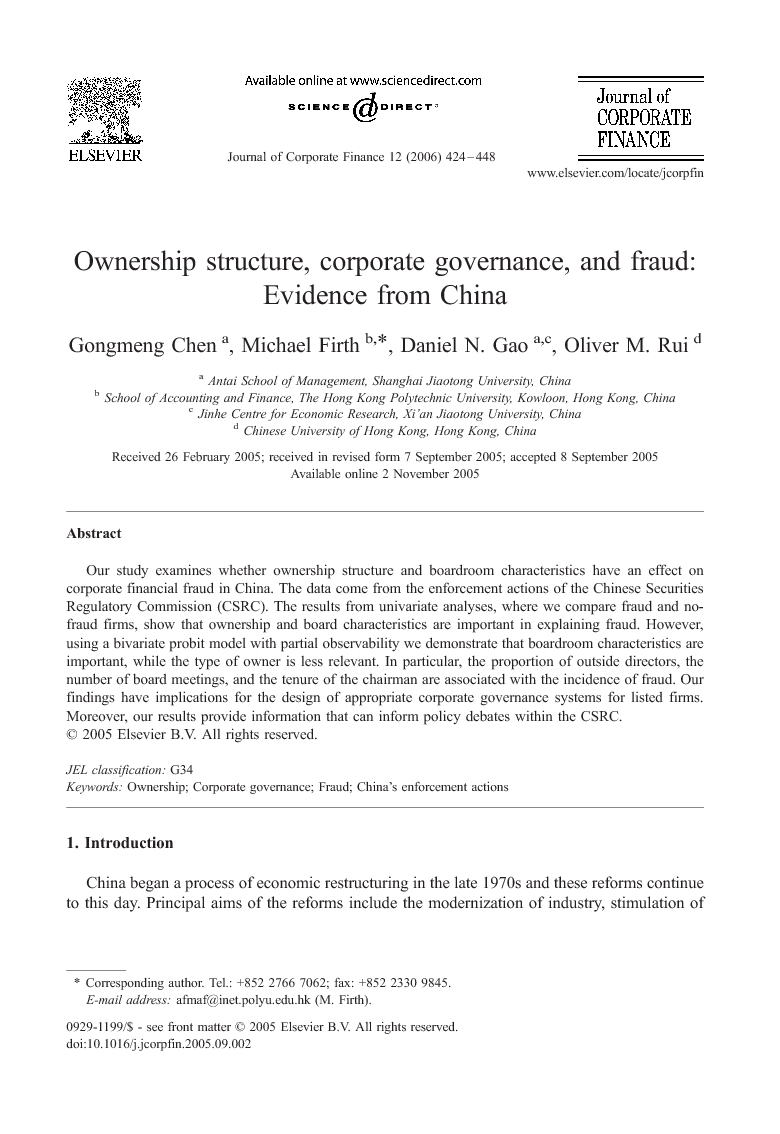 Our study examines whether ownership structure and boardroom characteristics have an effect on corporate financial fraud in China. The data come from the enforcement actions of the Chinese Securities Regulatory Commission (CSRC). The results from univariate analyses, where we compare fraud and no-fraud firms, show that ownership and board characteristics are important in explaining fraud. However, using a bivariate probit model with partial observability we demonstrate that boardroom characteristics are important, while the type of owner is less relevant. In particular, the proportion of outside directors, the number of board meetings, and the tenure of the chairman are associated with the incidence of fraud. Our findings have implications for the design of appropriate corporate governance systems for listed firms. Moreover, our results provide information that can inform policy debates within the CSRC.

Transition economies provide much scope for corporate fraud. Controlling stockholders and managers, newly freed from the constraints imposed by central planning, and faced with opportunities to increase their personal wealth, may be tempted to engage in, or acquiesce to, corporate fraud. The emphasis on making higher profits and increasing the stock price represent new pressures on top managers and some of them may resort to fraud to meet these objectives. There is also pressure to expropriate assets for the benefit of controlling stockholders or the personal business interests of the managers. In an attempt to reduce egregious acts of fraud, China has scrambled to introduce commercial and securities laws and, equally important, strengthen the powers and effectiveness of the regulator, the CSRC. The enforcement actions of the CSRC provide the fraud data for our study. The particular concern of our research is whether the ownership and governance characteristics of firms play a role in the propensity to commit fraud. We use both univariate analyses and bivariate probit models with partial observability to test our hypotheses. Based on our multivariate results we find that boardroom characteristics are a factor in explaining fraud while ownership patterns appear to be unimportant. Increasing the proportion of outsiders on the board is one way to reduce fraud. Outsiders monitor management (including the executive directors) and help deter fraud. The fact that firms that commit frauds have more board meetings suggests the directors realize some acts or decisions are borderline legal and so there is more debate about them resulting in more meetings. Chairmen with shorter tenure appear less able to deter fraud. The type of stockholder is significant in the univariate analysis with legal entities encouraging fraud while foreign investors inhibit fraud. The significances of these variables disappear in the multivariate analysis. In the probit model, the type of owner (legal entity, individual, foreign) has little impact on the propensity for a firm to commit fraud. Prestige auditors (based on size and based on the international Big 5) do not deter corporate fraud any more than other auditors. Corporate fraud is an unwelcome accompaniment to China's modern enterprise reforms and the China Securities Regulatory Commission is empowered to investigate and penalize fraud. The make-up of the board of directors is important in monitoring top management. Increasing the proportion of outside directors will help deter fraud and investors should factor this into their investment decisions. The CSRC's recent move to require more outside directors is a move in the right direction.