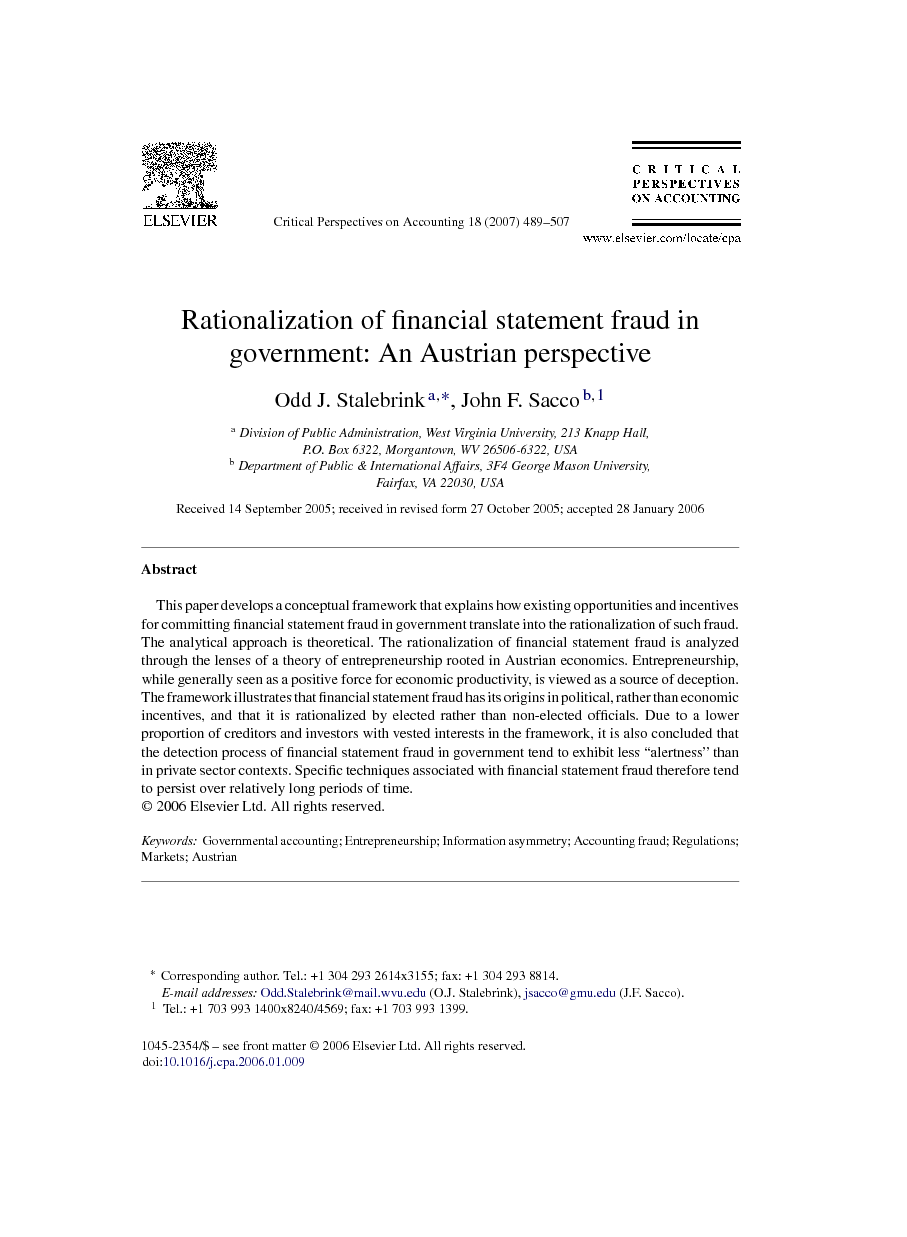 Fraudulent activities relating to the preparation and presentation of corporate financial statements have received a considerable amount of attention in the post-Enron era (Clarke et al., 2003, Inanga and Schneider, 2005 and Reinstein and McMillan, 2004). Financial statement fraud, however, is not isolated to the corporate sector. It may be found within entities in all sectors of the economy, including governmental, quasi-governmental and non-profit entities. This paper is focused on financial statement fraud within governmental entities in the US at the state and local levels. Explicitly stated, it seeks to explain how existing opportunities and incentives for committing financial statement fraud in government translate into the rationalization of the fraudulent acts. Included too, is a discussion of the potential losses that might result from such fraud. These losses extend to loss of personal income, opportunity costs and denigrated living conditions. For instance, manipulation of financial numbers can result in deterioration of infrastructure, as was evidenced in places such as New York City in the early 1970s (Herzlinger and Sherman, 1980). An analytical approach rooted in the Austrian economic tradition is used. The methodology underlying this tradition is referred to as praxeology. Praxeology places emphasis on the nature of explaining social phenomenon and is based on those aspects of human action that can be understood a priori. A fundamental appreciation of human action is therefore a basis for theory building. A resulting tenet of the Austrian economic framework that is of specific use for the purposes of this paper is the emphasis it places on the entrepreneur. The entrepreneur is viewed, in Austrian economics, as the ultimate source of human action. The entrepreneurial function is described in terms of “alertness” toward “unexploited” profit opportunities (Kirzner, 1973). The “profit” element, borrowing in part from Niskanen, can provide benefits for public employees or “profits” to special interest groups. Using the above terminology, the prospect of financial statement fraud can usefully be described in terms of government officials’ alertness to opportunities for engaging in financial statement fraud, as well as their willingness to seize them. Entrepreneurship, while generally seen as a positive force for economic productivity is, thus, viewed as a source of deception.

The objective of this paper has been to offer a conceptual framework that explains how existing opportunities and incentives for committing financial statement fraud in government translate into the rationalization of the fraudulent acts. Towards this end the rationalization of financial statement fraud was analyzed through the lenses of a theory of entrepreneurship rooted in the Austrian economic tradition. Using this framework, the prospect of financial statement fraud can be described in terms of government officials’ alertness to opportunities for engaging in financial statement fraud, as well as their willingness to seize them. Entrepreneurship, while generally seen as a positive force for economic productivity, is concluded to be a key source of deception. In other words, it has a “dark side.” The framework suggests that government has its own institutional and knowledge limitations (lack of private property incentives and pervasive log rolling). In particular, it suggests via counterfactual evidence that financial statement fraud has its origins in political, rather than economic incentives, and that it is rationalized by elected rather than non-elected officials. The role of economic incentives is confined to a discovery process driven by creditors and investors. Given their vested interests, the discovery process is geared toward the detection of financial statement fraud. Due to the lower proportion of creditors and investors with vested interest in government, compared to private entities, discovery is concluded to proceed a slower pace. Worded in terms of Kirzner, it may be concluded that the detection process of financial statement fraud in government tend to exhibit less “alertness,” compared to the private sector context. Specific techniques associated with financial statement fraud may therefore be expected to persist over relatively longer periods of time in government (i.e., remain undetected). Given this conclusion, the framework offers nuance to earlier findings presented by the authors (Stalebrink and Sacco, 2003). A caveat with the analysis presented in the paper is that the economic scope does not go far enough in a political context. The addition of political theory is a natural addition to gain more nuanced insights to the issue of financial statement fraud in government. Furthermore, the scope of this paper has not considered or mentioned the potential losses that financial statement fraud imposes. A discussion of these is appropriate. What destructive things might take place once financial statement fraud is rationalized? In the private sector, people lose monies and possibly their job. What happens in the government sector? If fixed assets are depreciated over a longer period than the borrowing associated with it then these fixed assets are likely to fall into disrepair. Worse, the government is still paying interest on fixed assets that are no longer useful. Future generations then face useless fixed assets or a situation where they are paying for old assets as well as new ones. The cost associated with loans for such things as housing improvement may be underestimated, putting pressure on future taxes, or on borrowing or less support for the needy. Even in the public sector, preservation and increases in private or personal property is important. If surplus is purposely kept small by pushing off recognition of revenue, then tax increases are easier to rationalize. A possible term to encompass costs of fraudulent or grossly misleading government financial reports may be political stealing. Possible costs could include, but not limited to: • Debt burden on future generations from selecting an accounting method that purposely allows underestimation. Congress, legally, can allow it but it is still political stealing. • Investor or creditor confidence drops here and around the world when things like appropriations are counted as real assets to offset the cost of government. The federal government does accrual accounting for net cost but allow appropriations to count against cost when the money for the appropriation may be borrowed, thus letting a liability cover cost. • Citizen confidence and welfare drops when they find out that there is no “lock box” for all their SS contributions. • Political parties and incumbents can also suffer when gross misinformation is revealed. On a final note, it is important to note that the critiques that the paper directs toward accounting and financial reporting practices in the post-reform environment are not meant to disqualify these. Rather it is an attempt to highlight potential problems that may significantly detract from the value of post-reforms accounting practices, including accrual, consolidation and fair value. The slope may still be positive (assuming the X-axis is a move toward post-reforms practices and the Y-axis represents financial statement fraud) but not as positive as proponents argue. In addition, government bodies can react to new methods and get similar results from new methods that they obtain under non-commercial methods. Perhaps there is an overall maturation especially with global market pressure for greater transparency but the steepness of the slope was not expected. In sum, therefore, the paper is not a critique of the reforms, at large, but rather a concern that the reforms do not yield the economic efficiencies promised. Numerous studies have raised similar concerns, since the introduction of accrual accounting in the early 1980s ( Carlin, 2005 and Stanton and Stanton, 1998).