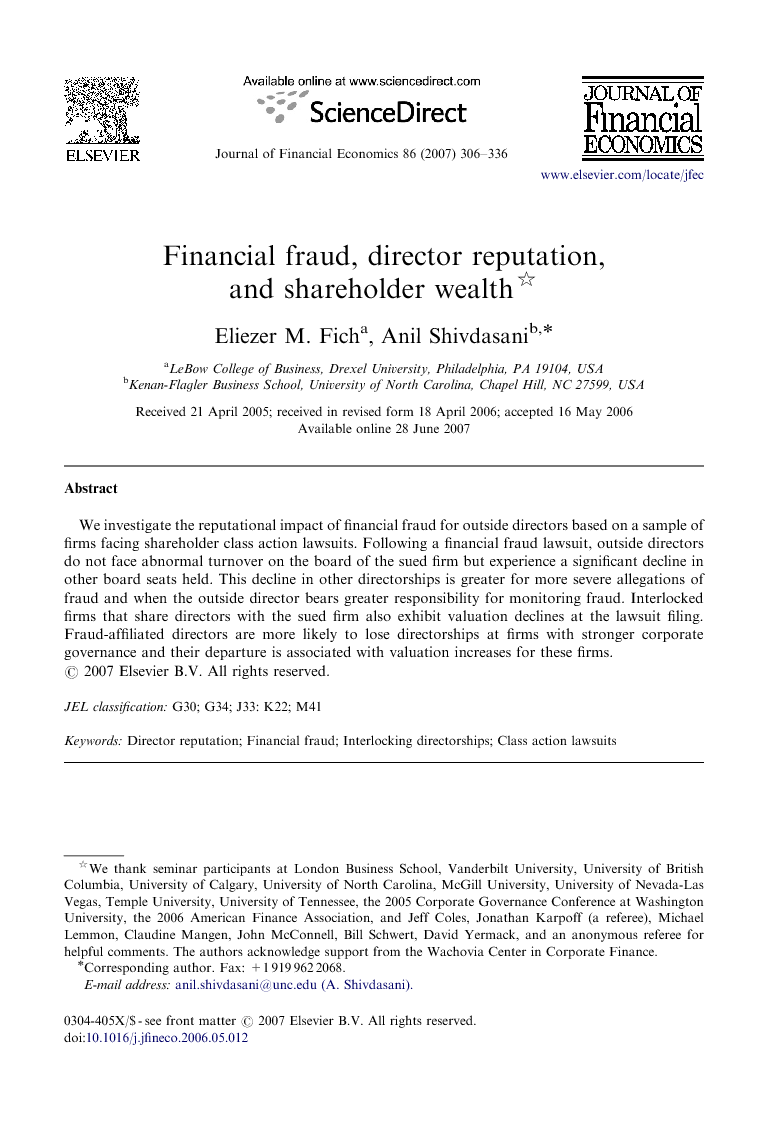 We investigate the reputational impact of financial fraud for outside directors based on a sample of firms facing shareholder class action lawsuits. Following a financial fraud lawsuit, outside directors do not face abnormal turnover on the board of the sued firm but experience a significant decline in other board seats held. This decline in other directorships is greater for more severe allegations of fraud and when the outside director bears greater responsibility for monitoring fraud. Interlocked firms that share directors with the sued firm also exhibit valuation declines at the lawsuit filing. Fraud-affiliated directors are more likely to lose directorships at firms with stronger corporate governance and their departure is associated with valuation increases for these firms.

We investigate reputational effects of financial fraud for outside directors of firms accused of fraud using a sample of firms facing class action lawsuits alleging violation of SEC rule 10(b)-5. Despite almost no evidence of abnormal turnover from the board of firms accused of fraud, we find that fraud is followed by a large and significant decline in the number of other board appointments held by outside directors. This decline is consistent with both a reputational penalty being borne by outside directors as well as an endogenous adjustment of monitoring expertise, where the expertise is reallocated to firms that are revealed to be more fraud-prone than previously expected. We show that a contagion effect exists for financial fraud through the board of directors. Firms that share directors with other boards accused of fraud are more likely to face fraud allegations themselves. When a firm faces a fraud class action lawsuit, other firms that employ outside directors of the defendant firm also experience a significant decline in valuation. Both these effects increase with the severity of the fraud allegation as measured by AAER releases and settlement amounts. The valuation loss for the interlocking firms is magnified if these firms possess weak governance characteristics and if the interlocked directors play a potentially critical role in influencing the likelihood of fraud due to their status as a member of the audit committee of either the sued or the interlocked firm, or as the CEO of the interlocked firm. Our findings show that outside directors are more likely to lose other board appointments when the severity of the fraud allegation is high, and when the outside director sits on the audit committee of the interlocked firm. Directorships are also more likely to be lost at firms with strong corporate governance, as measured by the Gompers, Ishii, and Metrick (2003) index. We also find that investors of interlocked firms experience positive announcement returns when a sued director departs the board. Overall, our results illustrate that fraud allegations have significant reputational consequences for outside directors of these firms and valuation effects for the other firms that are linked to sued firms through interlocked directorships.