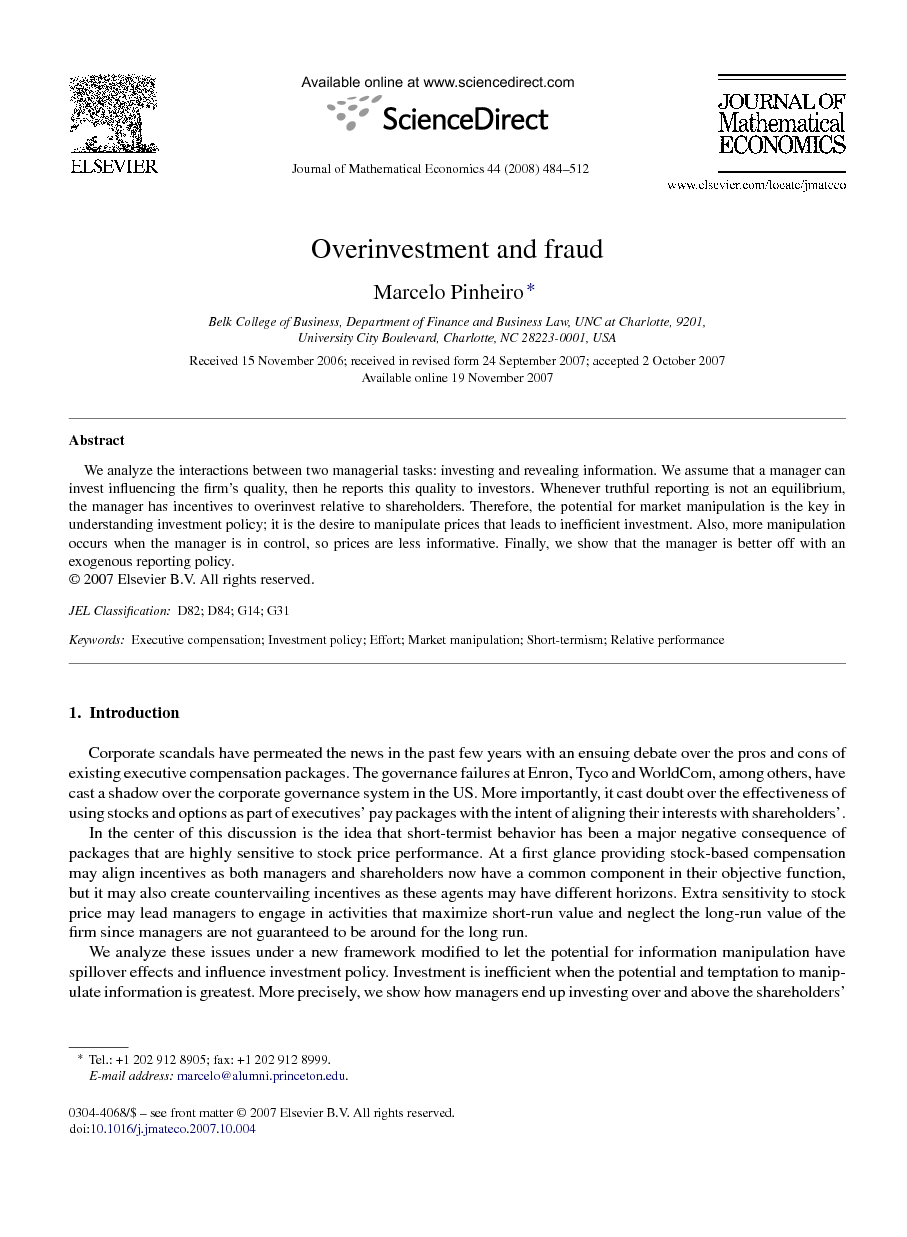 We analyze the interactions between two managerial tasks: investing and revealing information. We assume that a manager can invest influencing the firm’s quality, then he reports this quality to investors. Whenever truthful reporting is not an equilibrium, the manager has incentives to overinvest relative to shareholders. Therefore, the potential for market manipulation is the key in understanding investment policy; it is the desire to manipulate prices that leads to inefficient investment. Also, more manipulation occurs when the manager is in control, so prices are less informative. Finally, we show that the manager is better off with an exogenous reporting policy.

In this paper, we present a full blown equilibrium analysis of the choices of a manager. We put together four main elements: the fact that managers (and/or shareholders) have the choice to engage in value increasing activity, differing horizons of different agents, the important issue of endogenous information revelation and the fact that prices are not exogenous, and hence, respond to the previous choice variables. The main contribution of this work is to analyze the choice of investment and the reporting policy together. Most papers so far would only consider each one in isolation. We show that putting them together may generate important consequences, due to the feedback effect they have on each other. Investment policy depends on how information is revealed, and vice-versa. Interestingly enough, we show that, contrary to the norm, our equilibrium model may produce cases where managers and shareholders would both be overinvesting (or working too hard) as compared to the value maximizing level. This occurs because both insiders have objectives that are at least partially dependent on stock price, and the price has the tendency to be too sensitive to investment project choice. Hence, with these objectives and with the freedom of choosing the way to report the state of world to the public, they choose the “wrong” project. More importantly, we observe managers overinvesting even more than shareholders would. Therefore, the extra sensitivity of managers’ payoffs to the project choice leads them to overinvest above and beyond the optimal for either investors or shareholders. We also show that the results are not weakened even in the presence of multiple equilibria. Much on the contrary, multiplicity of equilibria allows us to draw stronger conclusions concerning the result that managers may overinvest. The fact that the reporting policy is determined endogenously has an even higher effect on the type of distortion generated by the manager’s control over project choice. Finally, we demonstrate that ex-ante the manager is made worse off by having the reporting policy under his control. So, the lack of commitment affects him negatively, and he would rather have a third party reveal the information concerning the quality of the company. We also discuss the empirical implications of the model.