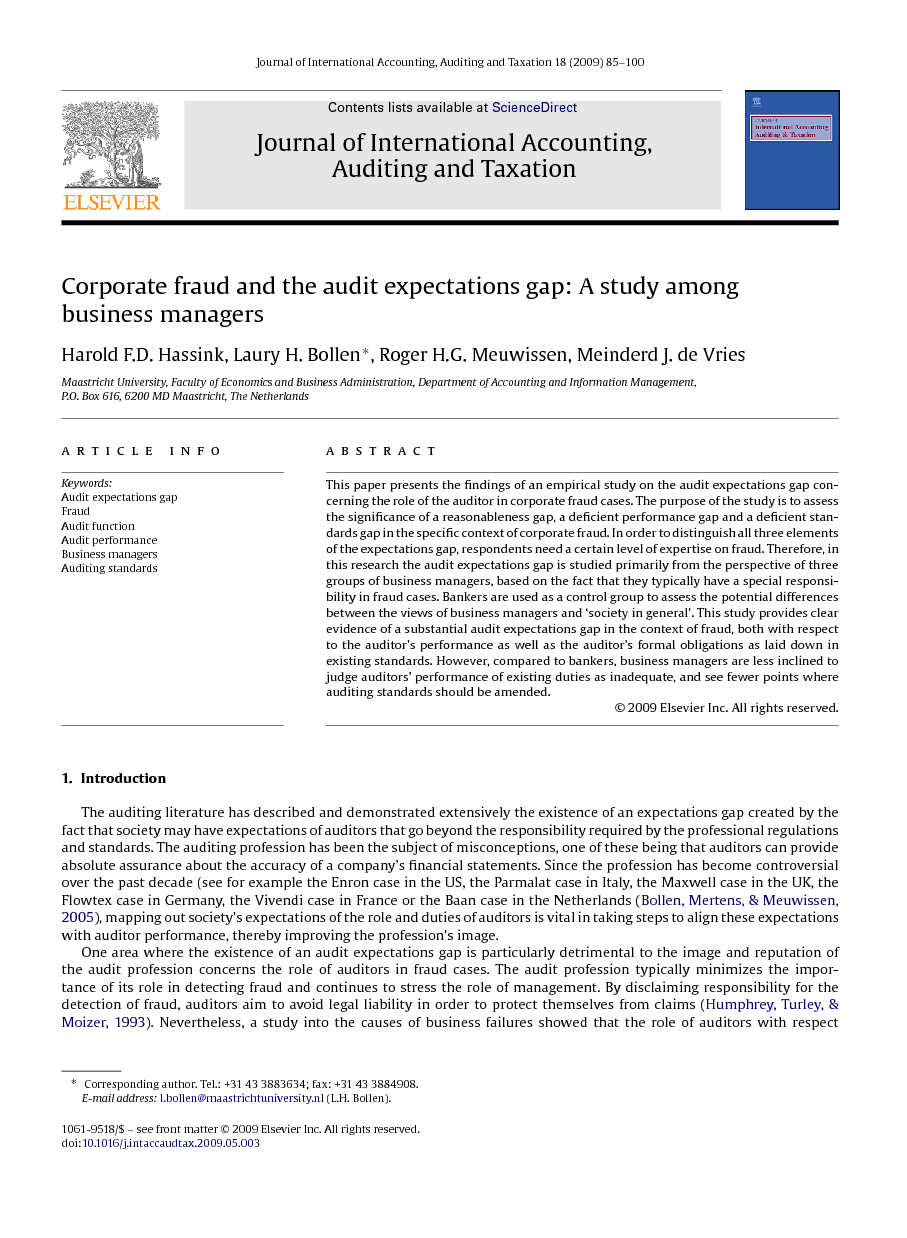 This paper presents the findings of an empirical study on the audit expectations gap concerning the role of the auditor in corporate fraud cases. The purpose of the study is to assess the significance of a reasonableness gap, a deficient performance gap and a deficient standards gap in the specific context of corporate fraud. In order to distinguish all three elements of the expectations gap, respondents need a certain level of expertise on fraud. Therefore, in this research the audit expectations gap is studied primarily from the perspective of three groups of business managers, based on the fact that they typically have a special responsibility in fraud cases. Bankers are used as a control group to assess the potential differences between the views of business managers and ‘society in general’. This study provides clear evidence of a substantial audit expectations gap in the context of fraud, both with respect to the auditor's performance as well as the auditor's formal obligations as laid down in existing standards. However, compared to bankers, business managers are less inclined to judge auditors’ performance of existing duties as inadequate, and see fewer points where auditing standards should be amended.

The goal of this study was to identify the possible existence and nature of the performance gap, the standards gap and the reasonableness gap, with respect to the auditor's responsibilities towards corporate fraud. A significant expectations gap was found for 20 of the 35 questionnaire statements, of which 15 are significant at the 1% level. However, the significance of an expectations gap is determined not only by its extent (this merely indicates that a gap exists) but also by how important business managers consider the issue. Fig. 3 depicts the relationship between extent and importance. The percentage of business managers agreeing with a specific statement (answering 5, 6 or 7 on the Likert scale) was used as a measure of consensus. The size of the gap was used as the second variable, measured by the difference between the average score of business managers and auditors. The numbers refer to the statements as indicated in Table 3 and Table 4. 5 Full-size image (34 K) Figure 3. Scatter plot of all significant expectations gaps. Figure options The most important quadrant is the upper right section of the matrix. These elements of the expectations gap are considered ‘high priority’; the differences in average scores are larger than 0.9 and there is a high degree of consensus among business managers. The lower right quadrant contains issues where there is a high level of consensus among business managers, but where the significance of the issues is relatively small. The gaps in the upper left quadrant are relatively large, but there is a low level of agreement among respondents and business managers generally do not consider them important. Finally, the ‘low priority’ quadrant contains gaps that are the least relevant since they are small and there is little consensus among business managers. The most important gaps and their recommended solutions are summarized in Table 6. In the remainder of this section, the matrix presented in Fig. 3 will be used to discuss the implications of our findings with respect to the performance gap, the reasonableness gap and the standards gap.