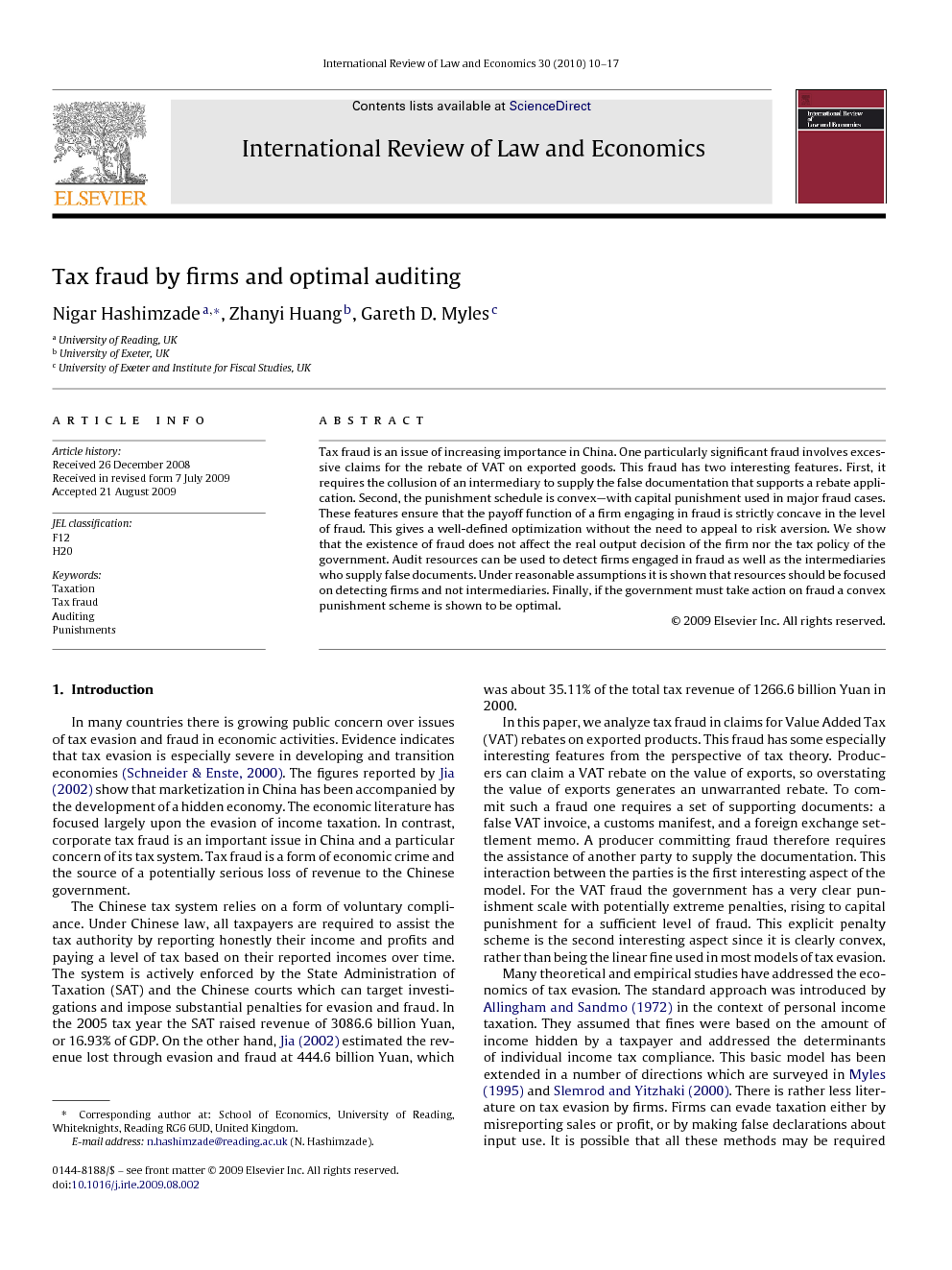 Tax fraud is an issue of increasing importance in China. One particularly significant fraud involves excessive claims for the rebate of VAT on exported goods. This fraud has two interesting features. First, it requires the collusion of an intermediary to supply the false documentation that supports a rebate application. Second, the punishment schedule is convex—with capital punishment used in major fraud cases. These features ensure that the payoff function of a firm engaging in fraud is strictly concave in the level of fraud. This gives a well-defined optimization without the need to appeal to risk aversion. We show that the existence of fraud does not affect the real output decision of the firm nor the tax policy of the government. Audit resources can be used to detect firms engaged in fraud as well as the intermediaries who supply false documents. Under reasonable assumptions it is shown that resources should be focused on detecting firms and not intermediaries. Finally, if the government must take action on fraud a convex punishment scheme is shown to be optimal.

The paper has provided an analysis of VAT fraud in the context of the Chinese rebate for exported goods. The interesting features of this situation are the convex punishment schedules which are defined in the relevant tax law and the fact that an additional party has to be involved in the supply of the documentation required to support the fraud. The analysis shows that there is a well-defined choice problem even for a firm which maximizes profit. This is due to the convexity of punishments in the level of fraud. It is therefore unnecessary to impose risk aversion upon the preferences of the firm. The decision process of the firm separates into two parts. The real decisions of the firm – on input use and the level of output – are unaffected by the possibility of engaging in fraud. Two options for the punishment schedules were considered: based on the extent of the fraud and based on the value of fraud. In the first case the extent of fraud increases as the tax rate increases. In the second case the value of the fraud remains constant as the tax rate is changed. The interesting finding is that in both cases the optimal tax rate is unaffected by the existence of fraud. Hence, there is no incentive for the government to reduce the tax rate to reduce fraud or of raising it to cover for lost revenue. Fraud therefore does not imply a deviation of the tax rate from its efficient value. The choice between focusing audit policy upon the firm or upon the supplier of false documentation depends primarily upon the cost of monitoring. If the marginal costs of monitoring the firm and the document supplier are equal, the policy is most likely to involve audits focused upon the firm. The analysis showed that when the punishment function is concave the firm has an incentive to commit the maximum possible fraud unless it is monitored with certainty. Therefore, a government with limited resources to monitor compliance will employ a convex punishment in order to reduce fraud. This result provides support for the structure of Chinese criminal law and shows that auditing and convex punishments can be determined endogenously in this model of crime. We must note that the convex punishment structure for tax fraud in China should not, perhaps, be viewed as a unique phenomenon. Shikalova (2004) analyzed payroll tax evasion by firms in Russia, under a slightly different set of assumptions. Model calibration to Russian data showed that the shape of the punishment function for the payroll tax evasion is convex in the amount of labor income in “black cash”.