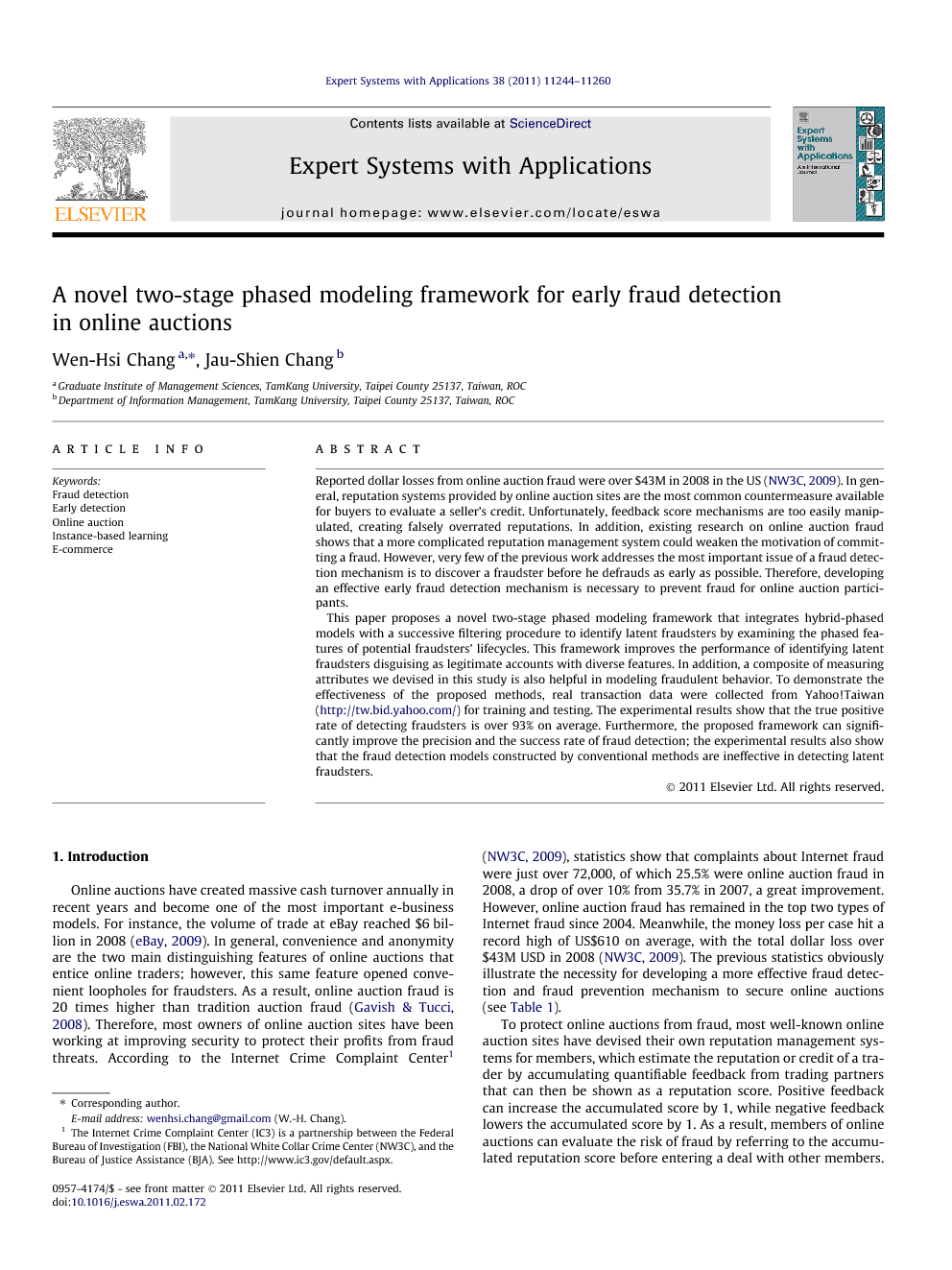 Reported dollar losses from online auction fraud were over $43M in 2008 in the US (NW3C, 2009). In general, reputation systems provided by online auction sites are the most common countermeasure available for buyers to evaluate a seller’s credit. Unfortunately, feedback score mechanisms are too easily manipulated, creating falsely overrated reputations. In addition, existing research on online auction fraud shows that a more complicated reputation management system could weaken the motivation of committing a fraud. However, very few of the previous work addresses the most important issue of a fraud detection mechanism is to discover a fraudster before he defrauds as early as possible. Therefore, developing an effective early fraud detection mechanism is necessary to prevent fraud for online auction participants. This paper proposes a novel two-stage phased modeling framework that integrates hybrid-phased models with a successive filtering procedure to identify latent fraudsters by examining the phased features of potential fraudsters’ lifecycles. This framework improves the performance of identifying latent fraudsters disguising as legitimate accounts with diverse features. In addition, a composite of measuring attributes we devised in this study is also helpful in modeling fraudulent behavior. To demonstrate the effectiveness of the proposed methods, real transaction data were collected from Yahoo!Taiwan (http://tw.bid.yahoo.com/) for training and testing. The experimental results show that the true positive rate of detecting fraudsters is over 93% on average. Furthermore, the proposed framework can significantly improve the precision and the success rate of fraud detection; the experimental results also show that the fraud detection models constructed by conventional methods are ineffective in detecting latent fraudsters.

Online auctions have created massive cash turnover annually in recent years and become one of the most important e-business models. For instance, the volume of trade at eBay reached $6 billion in 2008 (eBay, 2009). In general, convenience and anonymity are the two main distinguishing features of online auctions that entice online traders; however, this same feature opened convenient loopholes for fraudsters. As a result, online auction fraud is 20 times higher than tradition auction fraud (Gavish & Tucci, 2008). Therefore, most owners of online auction sites have been working at improving security to protect their profits from fraud threats. According to the Internet Crime Complaint Center1 (NW3C, 2009), statistics show that complaints about Internet fraud were just over 72,000, of which 25.5% were online auction fraud in 2008, a drop of over 10% from 35.7% in 2007, a great improvement. However, online auction fraud has remained in the top two types of Internet fraud since 2004. Meanwhile, the money loss per case hit a record high of US$610 on average, with the total dollar loss over $43M USD in 2008 (NW3C, 2009). The previous statistics obviously illustrate the necessity for developing a more effective fraud detection and fraud prevention mechanism to secure online auctions (see Table 1). Table 1. Statistics of online auction fraud complaints (NW3C, 2009). Year Total $ losses of Internet fraud $ Losses of online auction fraud Average $ loss per case Count % of Internet fraud complaints % of reported total loss 2004 $68,100,000.00 $59,247,000.00 $200.00 103,959 71.20 87 2005 $183,100,000.00 $75,071,000.00 $385.00 96,731 62.70 41 2006 $198,400,000.00 $65,472,000.00 $602.50 86,279 44.90 33 2007 $239,090,000.00 $53,556,160.00 $483.95 90,008 35.70 22.4 2008 $264,590,000.00 $43,128,170.00 $610.00 72,940 25.50 16.3 Table options To protect online auctions from fraud, most well-known online auction sites have devised their own reputation management systems for members, which estimate the reputation or credit of a trader by accumulating quantifiable feedback from trading partners that can then be shown as a reputation score. Positive feedback can increase the accumulated score by 1, while negative feedback lowers the accumulated score by 1. As a result, members of online auctions can evaluate the risk of fraud by referring to the accumulated reputation score before entering a deal with other members. Obviously, this kind of reputation systems is simple and easily understood; however, it is incapable of preventing fraud. Fraudster syndicates can always fabricate trading records to raise their reputations until accumulated scores are at satisfactory levels for their target victims at which point more expensive items are offered by the fraudster. In fact, Bhattacharjee argued that surcharges for each trade could increase the cost of conducting fake transactions and would be helpful in lowering the motivation of fraudsters (Bhattacharjee & Goel, 2005). Unfortunately, this scheme could be easily thwarted in real transactions, e.g., to avoid the surcharges, some legitimate sellers intentionally mark high-priced goods with an unrealistically low price (such as $1USD) before the buyer submits his final bid. Fraudsters could soon imitate this behavior and fabricate transactions without any cost just as before. To increase the difficulty of fabricating feedback scores to prevent fraud, researchers proposed different types of reputation management systems (Huynh et al., 2004a, Huynh et al., 2006, Marti and Molina, 2006, Song et al., 2005, Yolum and Singh, 2003a, Yu and Singh, 2003b and Yu and Singh, 2003). To obtain a more accurate reputation level, some researchers adopt trust network analysis to produce an objective feedback score, which is then combined with the subjective feedback score for reputation estimation. Essentially, these reputation models have been developed to provide a quantitative measure that makes the partner selection process more systematic (Wang, Mokhtar, & Macaulay, 2008). However, network-based analysis computation through enumeration of all possible state assignments is exponential in time (Pandit, Chau, Wang, & Faloutsos, 2007). Different from the previous methods, some researchers have employed machine learning algorithms to identify fraudsters by extracting features of suspended accounts from the blacklists of auction sites. Using these features, a fraud detection model can be built with different algorithms (Chau and Faloutsos, 2005, Chau et al., 2006, Ku et al., 2007 and Zhang et al., 2008). Substantially, the appropriateness of measuring attributes for features and methods of modeling would determine the effectiveness of a detection model. In fact, there are plenty of encouraging experimental results in these studies by means of applying various learning algorithms to different measuring attributes. However, we found that related literature and previous methods do not address the more important fact that fraud detection models should be effective in discovering fraudsters before they defraud. It is not enough to build detection models with only the features of actual defrauding behaviors. Further, current models have difficulty in detecting a fraudster’s transaction behaviors during the non-criminal period as these actions mimic those of regular legitimate users. For effective early fraud detection for online auctions, this paper proposes a novel two-stage phased modeling framework to identify latent fraudsters by examining the lifecycle phases of a potential fraudster. The proposed framework which integrates hybrid-phased models with a newly-designed successive filtering procedure was proved to identify latent fraudsters with diverse features effectively. In addition, a set of measuring attributes we devised in this study is also helpful in constructing detection models. To demonstrate the effectiveness of the proposed framework, real transaction data were collected from Yahoo!Taiwan for training and testing. The experimental results show that both the true positive rate of identifying legitimate and fraudulent accounts is over 93%. Meanwhile, the results also represent the inability of traditional modeling methods in detecting latent fraudsters. The rest of this article is organized as follows: Section 2, the preliminary and literature review, introduce existing reputation systems, the design of different measuring attributes, and discusses different methods for fraud detection. The third section explains how transaction histories were partitioned to simulate behaviors in the early phases of a fraud. Section 4 describes how we design a set of abstract feature measuring attributes for latent fraudsters according to our observations, and how to apply instance-based learners (IBL) in order to build fraud detection models. Section 5 presents the experimental results. And finally, the conclusion and future research directions are presented in the last section.

The statistics of tremendous reported monetary losses in online auctions have weakened intention of trading in general. To keep online auction prosperous, implementing an effective mechanism to lower the risk of being defrauded is necessary for bolstering traders’ confidence. Considering the current conditions of online auction operation, it would be more realistic to continue using existing reputation systems to enhance the capability of early fraud detection. Hence, we proposed the two-stage phased modeling framework proved to successfully emulate the fraudulent behaviors in the latency period. In this study, our experimental results show that the proposed two-stage phased modeling framework satisfies the requirements of identifying latent fraudsters in online auctions, in which the average recall rate of classifying different phased fraudsters and legitimate accounts is over 93%. The results also demonstrate the effectiveness of the measuring attributes we adopted which are useful for boosting the performance of detection models. The framework makes early fraud detection in online auctions more feasible than conventional fraud detection mechanisms. However, disclosure of information on potential fraudsters is inevitable to lead to the possibility of litigation with different legal arguments in practice, since it is impossible for any fraud detection mechanism to have zero misjudgment. Therefore, the police cannot arrest a suspect only with the features of abnormal behaviors instead of the evidence for victims. If the proposed framework were implemented in law enforcements, regulatory agencies and online auctions sites, it could be helpful in monitoring and investigating the irregular behaviors of suspicious accounts until a case of fraud actually occurred. At least, the warning messages from the mechanism could make a trader reconsider his next move on the alert to reduce the chance of being defrauded. Even though our findings have demonstrated practicality in online auctions, there is some work needs to be proceeded for further improvement in the future: (1) Instance based learning is slower than decision trees, such as C4.5. Particularly, noisy exemplars in training sets will impact the effectiveness of a classifier (Marchiori, 2008). The capability of outputting a concept is also worse, it cannot provide structured information either generating the concept of a generalization or decision rules (Aha & Kibler, 1991). Therefore, it is difficult to explain a deception with behavioral rules. (2) The starting point for transaction history segmentation is currently at the origin of account creation, which requires a longer processing time. Therefore, we intend to improve our methods of transaction history partition to make calculation more efficient, for example extraction after the phase 50% point. (3) This method does not define the difference between long-term conspiracy and identity theft. However, more and more frauds have been identity-theft based, since shorter lifespan trends of fraudsters reduce users’ response time and enter the execution period directly with less preparation. We are considering other particular modeling approaches to differentiate the two types of frauds. For instance, removing part of transaction histories by a certain point to build behavior models, and then determining which type of fraud occurred through phased behavioral differences. (4) Some other non-criminal reasons may cause negative ratings, such as personal dissatisfaction along with trading processes, which might lower the dependability and lead to misjudging a legitimate seller as a fraudster. Unfortunately, the exact reasons a seller or buyer obtains negative ratings are difficulty to be grappled with. Once a system can differentiate the reasons of negative ratings automatically, the accuracy of early fraud detection should be improved.