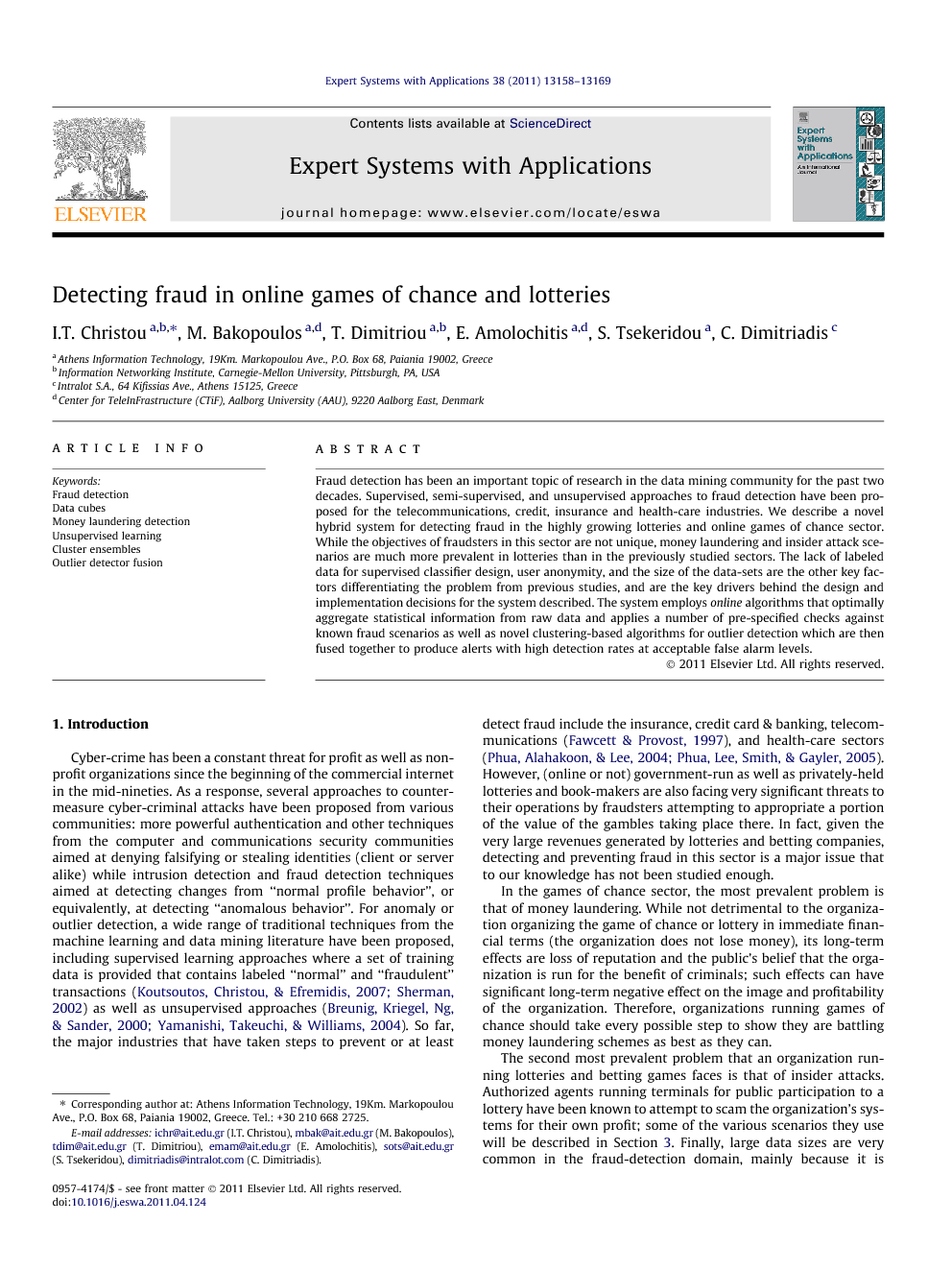 Fraud detection has been an important topic of research in the data mining community for the past two decades. Supervised, semi-supervised, and unsupervised approaches to fraud detection have been proposed for the telecommunications, credit, insurance and health-care industries. We describe a novel hybrid system for detecting fraud in the highly growing lotteries and online games of chance sector. While the objectives of fraudsters in this sector are not unique, money laundering and insider attack scenarios are much more prevalent in lotteries than in the previously studied sectors. The lack of labeled data for supervised classifier design, user anonymity, and the size of the data-sets are the other key factors differentiating the problem from previous studies, and are the key drivers behind the design and implementation decisions for the system described. The system employs online algorithms that optimally aggregate statistical information from raw data and applies a number of pre-specified checks against known fraud scenarios as well as novel clustering-based algorithms for outlier detection which are then fused together to produce alerts with high detection rates at acceptable false alarm levels.

Organizations running lotteries and games of chance face significant risk from fraud-related threats. Money laundering, fixing games, and agent cheating are only a few of the possible fraud schemes that have been perpetrated in the past. The enormity of the number of transactions carried out by such organizations makes the task of fraud-detection a real challenge. We have designed and successfully implemented a system that utilizes novel data-structures inspired from OLAP data-base technology to aggregate necessary and sufficient statistical information about individual transactions, on which a combination of outlier detection strategies is applied, and whose results are then fused together by means of the data-cube cells, to produce a final sorted in order of importance list of alerts that the system administrator can then further investigate. We have combined (I) test results from running pre-specified scenarios, (II) standard statistical inference tests, (III) density-aware clustering methods (LOF), and (IV) cluster ensembles to cluster data-cube cells in large number of groups using structural entropy or MSSC criteria (EXAMCE). Experiments have shown that both LOF and EXAMCE are highly suitable methods for detecting outliers in large-dimensional data-sets. Results from each method are weighted and fused together to produce a sorted list of alerts by aggregating them into the data-cube cells or slices for which they arise. The prototype implementation compresses the original transactional (coupon) data to such factors so that the aggregated statistics fit into main memory and thus enable the online algorithms previously discussed to operate on them. New data are aggregated in periodic intervals and incrementally added to the previous historical statistical information kept in stored data-cubes. In this way, the system is kept up-to-date with very small delays (in the order of a few hours), and is able to run the full suite of its algorithms against the operational data-bases of an international provider of lotteries and games of chance in less than 1 h on a commodity server.