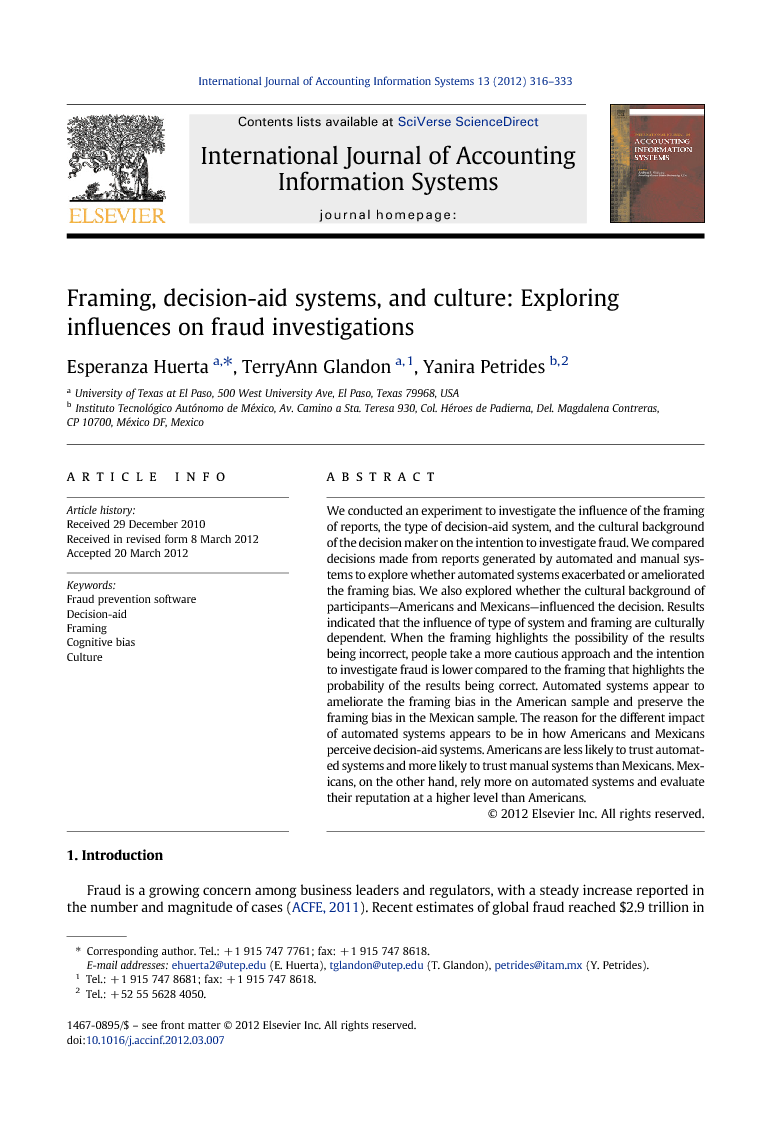 We conducted an experiment to investigate the influence of the framing of reports, the type of decision-aid system, and the cultural background of the decision maker on the intention to investigate fraud. We compared decisions made from reports generated by automated and manual systems to explore whether automated systems exacerbated or ameliorated the framing bias. We also explored whether the cultural background of participants—Americans and Mexicans—influenced the decision. Results indicated that the influence of type of system and framing are culturally dependent. When the framing highlights the possibility of the results being incorrect, people take a more cautious approach and the intention to investigate fraud is lower compared to the framing that highlights the probability of the results being correct. Automated systems appear to ameliorate the framing bias in the American sample and preserve the framing bias in the Mexican sample. The reason for the different impact of automated systems appears to be in how Americans and Mexicans perceive decision-aid systems. Americans are less likely to trust automated systems and more likely to trust manual systems than Mexicans. Mexicans, on the other hand, rely more on automated systems and evaluate their reputation at a higher level than Americans.

Fraud is a growing concern among business leaders and regulators, with a steady increase reported in the number and magnitude of cases (ACFE, 2011). Recent estimates of global fraud reached $2.9 trillion in losses (ACFE, 2011), compelling the development of more effective methods to prevent fraud. Technology has been instrumental in this effort with the development of automated systems that can continuously monitor information. However, we have limited knowledge on how these automated systems influence decision making (O'Donnell and David, 2000). This paper investigates whether the design characteristics of reports generated by automated decision-aid systems (ADS) influence decision making. We study the framing of the report generated by the system and its impact on the decision whether to investigate fraud. We also explore the cultural background of the decision maker to expand this investigation to cross-cultural settings. Automated decision-aid systems are increasingly used to support fraud prevention and detection because they are capable of analyzing large amounts of data. Data mining programs can distinguish disgruntled employees who can be identified based on the pattern of their email exchanges. Being a disgruntled employee is an early indicator of a potential fraud (Holton, 2009 and ACFE, 2011). The practice of data mining employees' emails has increased because email communications have been used to demonstrate misconduct, such as in the Enron case. Email communications are an abundant source of data that can be used not only for ex-post evidence, but also ex-ante to identify discontented employees, allowing companies to initiate focused investigations to prevent fraud ( Pemble, 2003a and Pemble, 2003b). In addition to analyzing large amounts of data, some automated systems may help individuals to overcome certain cognitive biases in decision making (Rose, 2002). Yet, it is unclear whether the use of ADS exacerbates or mitigates specific cognitive biases such as framing. Therefore, we conduct an experiment to explore the influence of the framing of the report on decision making. The way the report is framed may cause managers to undertake costly and unnecessary investigations. On the other hand, managers may choose to disregard necessary investigations due to the framing of the report. Failing to initiate a timely fraud investigation defeats the purpose of preventive mechanisms to deter fraud. The final aspect of this research is a cross-cultural setting to explore the influence of the cultural background of the decision maker. Conducting studies on multiple countries has increased in relevance as firms move towards multinational systems implementations (Biehl, 2007). Prior research on the influence of framing and ADS on decision-making has produced mixed results. There is evidence that framing interacts (Cheng and Wu, 2010) and does not interact (Brown and Jones, 1998 and Perrin et al., 2001) with automated decision-aid systems. This study contributes to the literature by exploring the interaction between the framing of reports, the use of decision-aid systems, and the culture of the decision-maker. The results of this research suggest that the framing of the reports interacts with the use of automated decision-aid systems, depending on the culture of the decision maker. To further investigate framing and the use of ADS across cultures, our study also explores the relationship between cultural values and reliance and trusting intentions on, and perceived reputation of, manual and automated systems. This paper is organized as follows. First, we review the literature of framing, decision-aid systems, and culture. We develop our research model and present the research questions. Then, we explain the experimental procedure and present the results of the data analysis. In the final section we present the results and draw conclusions from the study. We also discuss the limitations of the study and potential areas for future research.