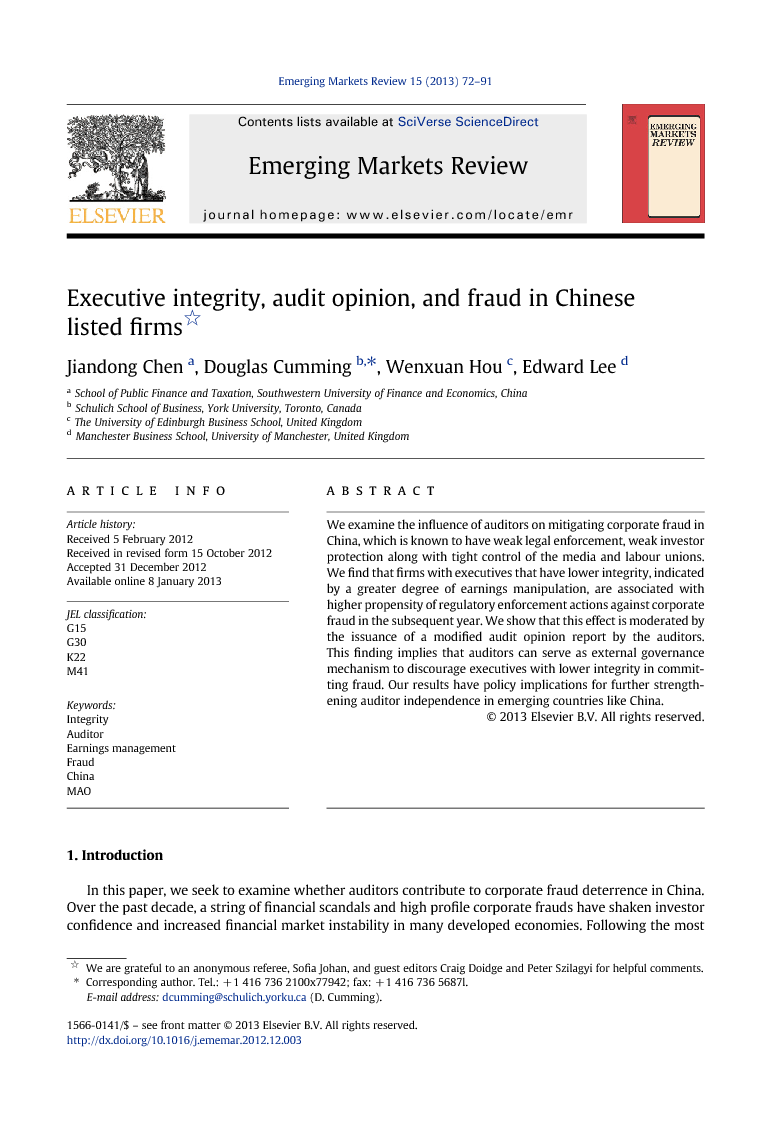 We examine the influence of auditors on mitigating corporate fraud in China, which is known to have weak legal enforcement, weak investor protection along with tight control of the media and labour unions. We find that firms with executives that have lower integrity, indicated by a greater degree of earnings manipulation, are associated with higher propensity of regulatory enforcement actions against corporate fraud in the subsequent year. We show that this effect is moderated by the issuance of a modified audit opinion report by the auditors. This finding implies that auditors can serve as external governance mechanism to discourage executives with lower integrity in committing fraud. Our results have policy implications for further strengthening auditor independence in emerging countries like China.

This study examines the efficacy of auditors as an external governance mechanism to curb corporate fraudulent behaviour among Chinese listed firms with higher earnings manipulation, which we use as proxy of low executive integrity. Corporate fraud reduces the confidence of outside investors and the stability of capital market, which in turn hampers the growth and development of emerging countries. China is a leading emerging economy and provides a suitable setting to study the contribution of auditors to corporate fraud deterrence because it has weak legal enforcement and investor protection along with tight control of the media and labour unions. Under this institutional environment, other external governance mechanisms such as investors, media, and employees are expected to be less effective in deterring managerial opportunism compared to their counterparts in Western developed economies. This leaves auditors to serve as one of the few credible sources of external governance mechanisms capable of discouraging opportunistic behaviour of managers. Indeed, our empirical evidence suggests that Chinese listed firms with a greater degree of earnings manipulation, which we assume proxies for lower managerial integrity, are associated with a greater likelihood of regulatory enforcement actions against corporate fraud. This effect is moderated by issuance of MAOs. Since the underlying motive of earnings manipulation and corporate fraud is broadly similar, one could argue that it is not surprising to find a significant relationship between the former and latter. Critics could also argue that the correlation between managerial integrity and corporate fraud is not an unexpected finding either, irrespective of the empirical proxy of the former that we apply. However, what is interesting from our observation is that, on average, the issuance of a MAO for firms with high earnings manipulation (or low managerial integrity) significantly reduces the subsequent occurrence of corporate fraud identification by regulatory authority. This suggests that auditors in China serve as effective early warning mechanism to expose and discourage managerial opportunism from escalating into corporate fraud. As an increasingly influential emerging economy, the challenges and experiences of China's development have useful implications for other developing countries. The main policy implication of our study is that in countries with similar institutional backgrounds similar to China, it is important to strengthen the quality and independence of the auditing profession in order to realize its full potential and value as an external governance mechanism. Auditors can play a crucial role to improve the credibility of financial statements issued by firms, which in turn reduces the information disadvantage of outside investors. Armed with better financial information, outside investors are more capable of making correct investment decisions to channel their capital to firms with growth opportunities, which in turn benefits the wider economy.