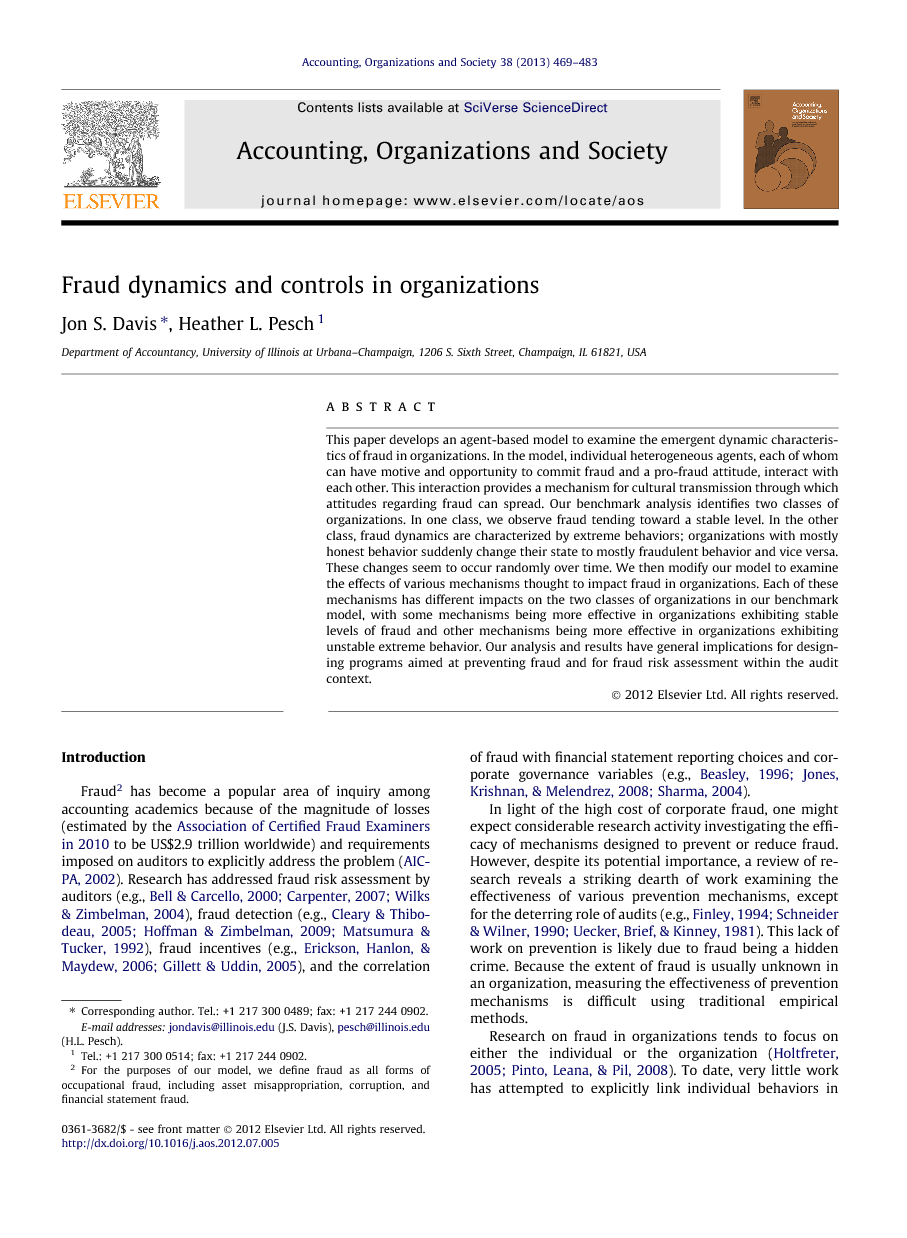 This paper develops an agent-based model to examine the emergent dynamic characteristics of fraud in organizations. In the model, individual heterogeneous agents, each of whom can have motive and opportunity to commit fraud and a pro-fraud attitude, interact with each other. This interaction provides a mechanism for cultural transmission through which attitudes regarding fraud can spread. Our benchmark analysis identifies two classes of organizations. In one class, we observe fraud tending toward a stable level. In the other class, fraud dynamics are characterized by extreme behaviors; organizations with mostly honest behavior suddenly change their state to mostly fraudulent behavior and vice versa. These changes seem to occur randomly over time. We then modify our model to examine the effects of various mechanisms thought to impact fraud in organizations. Each of these mechanisms has different impacts on the two classes of organizations in our benchmark model, with some mechanisms being more effective in organizations exhibiting stable levels of fraud and other mechanisms being more effective in organizations exhibiting unstable extreme behavior. Our analysis and results have general implications for designing programs aimed at preventing fraud and for fraud risk assessment within the audit context.

Fraud2 has become a popular area of inquiry among accounting academics because of the magnitude of losses (estimated by the Association of Certified Fraud Examiners in 2010 to be US$2.9 trillion worldwide) and requirements imposed on auditors to explicitly address the problem (AICPA, 2002). Research has addressed fraud risk assessment by auditors (e.g., Bell and Carcello, 2000, Carpenter, 2007 and Wilks and Zimbelman, 2004), fraud detection (e.g., Cleary and Thibodeau, 2005, Hoffman and Zimbelman, 2009 and Matsumura and Tucker, 1992), fraud incentives (e.g., Erickson et al., 2006 and Gillett and Uddin, 2005), and the correlation of fraud with financial statement reporting choices and corporate governance variables (e.g., Beasley, 1996, Jones et al., 2008 and Sharma, 2004). In light of the high cost of corporate fraud, one might expect considerable research activity investigating the efficacy of mechanisms designed to prevent or reduce fraud. However, despite its potential importance, a review of research reveals a striking dearth of work examining the effectiveness of various prevention mechanisms, except for the deterring role of audits (e.g., Finley, 1994, Schneider and Wilner, 1990 and Uecker et al., 1981). This lack of work on prevention is likely due to fraud being a hidden crime. Because the extent of fraud is usually unknown in an organization, measuring the effectiveness of prevention mechanisms is difficult using traditional empirical methods. Research on fraud in organizations tends to focus on either the individual or the organization (Holtfreter, 2005 and Pinto et al., 2008). To date, very little work has attempted to explicitly link individual behaviors in the organization to organizational outcomes within the fraud context.3 Understanding the individual–organization link is important because a focus on either individual behavior or the organization in isolation turns a blind eye to the social process through which individuals’ behaviors are influenced by the organization as a whole and vice versa. In other words, a narrow focus on individual behaviors or on the organization ignores the organization’s sociology, which can have profound effects on fraud outcomes and the efficacy of fraud prevention mechanisms. We develop a model of fraud in organizations that allows an evaluation of the relative efficacy of mechanisms designed to prevent fraud while explicitly recognizing the social processes underlying the formation of organizational norms. To develop our model, we use a method that is relatively new in accounting research: agent-based modeling (ABM). Designed to study the emergence of macro-level phenomena from micro-level interactions, ABM is well suited to address questions involving organizational outcomes (e.g., a culture of fraud) resulting from the interactions between individuals within an organization and organizational variables. The use of ABM confers an additional advantage: It allows us to gain insights into fraud even when data in organizations are censored. Our model is comprised of an organization represented by 100 independent, heterogeneous agents (employees) and a set of simple interaction rules. Following Cressey’s (1953) characterization of occupational fraud (known as the fraud triangle hypothesis), any agent in our model possessing motive, opportunity, and an attitude that frames the fraudulent act as acceptable will commit fraud. We allow agents to repeatedly interact, with an eye toward emergent aggregate fraud levels and the dynamics of fraud over time. We begin with a benchmark model in which all agents have opportunity and motive. We then modify our model to investigate the impact of mechanisms to prevent or detect fraud. We first investigate the impact of modifying the likelihood that agents perceive the opportunity to commit fraud. Next, we consider a hierarchy in which higher-level honest employees exert greater influence than lower-level employees (i.e., “tone at the top”). Then we consider the impact of asymmetric influence exerted by fraudsters relative to honest employees (which can arise as a result of ethical training, the implementation of a code of ethics, or a variety of other interventions). Finally, we consider the impact of detection and termination efforts. Two patterns emerge from the analysis of our benchmark model, depending upon how susceptible individual agents are to social influence. When average susceptibility is low, the number of fraudsters in the organization tends toward a specific level and remains relatively stable over time. When average susceptibility is moderate to high we observe a very different pattern in which the number of fraudsters in the organization vacillates over time between extremes; either virtually no one in the organization is a fraudster or virtually everyone is. When we consider mechanisms to prevent or eliminate fraud, we find that their impact is contingent on average susceptibility to social influence within the organization. A reduction in perceived opportunity or the introduction of influential, honest managers (tone at the top) reduces the number of fraudsters, but neither change to our model is effective in eliminating outbreaks of fraud when susceptibility is moderate or high. Allowing honest employees to be more influential than fraudsters has no qualitative effect when susceptibility is low; however, it transforms behavior when average susceptibility is moderate to high, reducing the number of fraudsters to near zero and eliminating fraud outbreaks. The contingent nature of this effect may prove important in fraud risk assessments performed by auditors. We also find that efforts to remove fraudsters can effectively reduce the number of fraudsters to near zero regardless of the level of susceptibility, but such efforts do not eliminate fraud outbreaks when susceptibility is moderate to high. This paper continues with a brief introduction to ABM. This methodological introduction is followed by the development of a benchmark model of an organization with no interventions to prevent fraud. We then modify the benchmark model to examine the effect of anti-fraud interventions. This paper ends with our conclusions and a discussion of the implications of our analysis.

We use an ABM to investigate the dynamics of fraud within organizations and the impact of fraud prevention and detection mechanisms. Our model consists of an organization, agents (employees), and a set of simple social interaction rules. In accordance with Cressey’s (1953) occupational fraud model, any agent within our model possessing the conjunction of motive, opportunity, and a pro-fraud attitude commits fraud. We allow agents to repeatedly interact, resulting in changes in agent attitudes toward fraud (via cultural transmission). We find that two types of organizations emerge, depending on how susceptible individual agents are to social influence. When average susceptibility to influence is low, a state distribution emerges where aggregate fraud levels tend toward a specific level of fraud. When average susceptibility is moderate to high, we observe an outcome characterized by extreme swings in behavior from an overall honest organization to an overall fraudulent one. After identifying these two types of organizations, we turn our attention to the effect of mechanisms to prevent, detect, and eliminate fraud. We examine the effects of decreasing perceived opportunity to commit fraud, tone at the top, asymmetric influence (resulting from ethical interventions), and the removal of fraudsters from the organization. We find the effectiveness of these mechanisms is contingent on the type of organization. Our findings are summarized in Table 4.