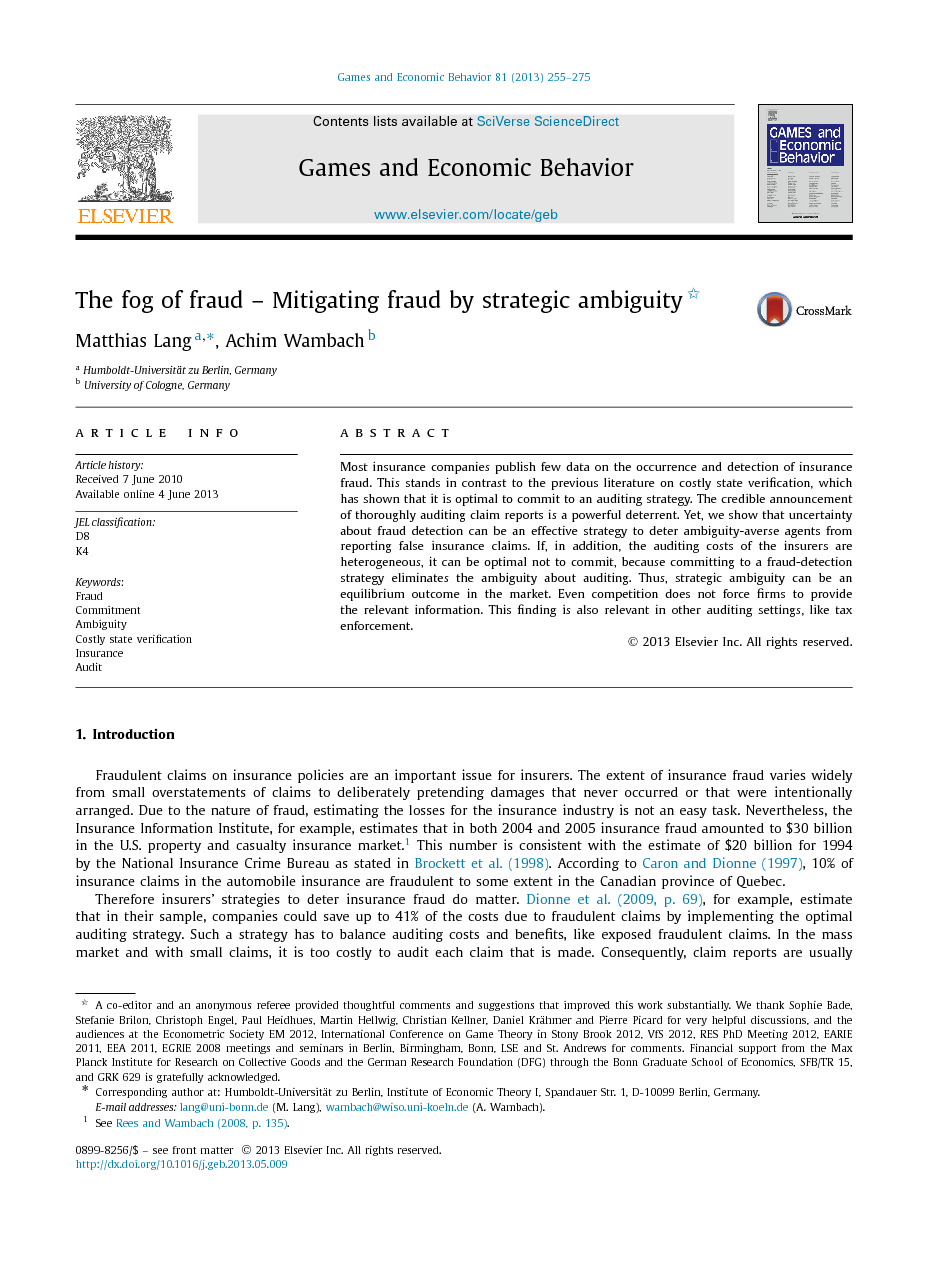 Most insurance companies publish few data on the occurrence and detection of insurance fraud. This stands in contrast to the previous literature on costly state verification, which has shown that it is optimal to commit to an auditing strategy. The credible announcement of thoroughly auditing claim reports is a powerful deterrent. Yet, we show that uncertainty about fraud detection can be an effective strategy to deter ambiguity-averse agents from reporting false insurance claims. If, in addition, the auditing costs of the insurers are heterogeneous, it can be optimal not to commit, because committing to a fraud-detection strategy eliminates the ambiguity about auditing. Thus, strategic ambiguity can be an equilibrium outcome in the market. Even competition does not force firms to provide the relevant information. This finding is also relevant in other auditing settings, like tax enforcement.

In this paper, we discuss a costly state verification model with ambiguity about auditing costs. For this purpose, we use an insurance fraud setting. We show that ambiguity aversion reduces the inclination to engage in insurance fraud at a given level of auditing. Insurers, on the other hand, can gain by not committing to an auditing probability and maintaining the uncertainty, even if this means abandoning the advantages of commitment. Hence, in the main contribution of this paper we prove that uncertainty can be a feasible deterrence device. The second contribution is to study a model with ambiguity aversion in a game-theoretic framework. Although ambiguity seems even more relevant in a strategic interaction than for a single player, the literature on ambiguity aversion has so far focused on decision theory and finance with notable exceptions discussed in the introduction. We provide a game-theoretic analysis of ambiguity-averse policyholders. Modeling the ambiguity on the type space, i.e., the auditing costs of the insurers, allows the use of common equilibrium concepts. The third contribution of this paper is to consider whether competition forces firms to educate consumers. According to a common line of argument, competitive pressure provides consumers with all relevant information, as competitors have an incentive to reveal the information in order to increase their market shares. In our model, uncertainty prevails and on the equilibrium path no firm has an incentive to make auditing costs or probabilities public. Therefore, there is a market equilibrium with perfect competition where firms do not grant access to their information about auditing probabilities and costs. The resulting uncertainty allows mitigating the effects of insurance fraud. Finally, we summarize the incentives of insurers to avoid commitment. Insurers benefit from policyholdersʼ aversion to the ambiguity about the auditing and the resulting lower level of fraud if their costs of auditing are high enough. For low costs, however, insurers gain from non-committing, as they catch more fraudsters, thus saving indemnities and earning fines at low costs. In some cases, these effects are so strong that the costs caused by fraud and its deterrence are lower than under credible commitment to an auditing level. Consequently, insurers opt to implement strategic ambiguity.