عنوان انگلیسی
The construction of the risky individual and vigilant organization: A genealogy of the fraud triangle
دانلود فوری مقاله + سفارش ترجمه 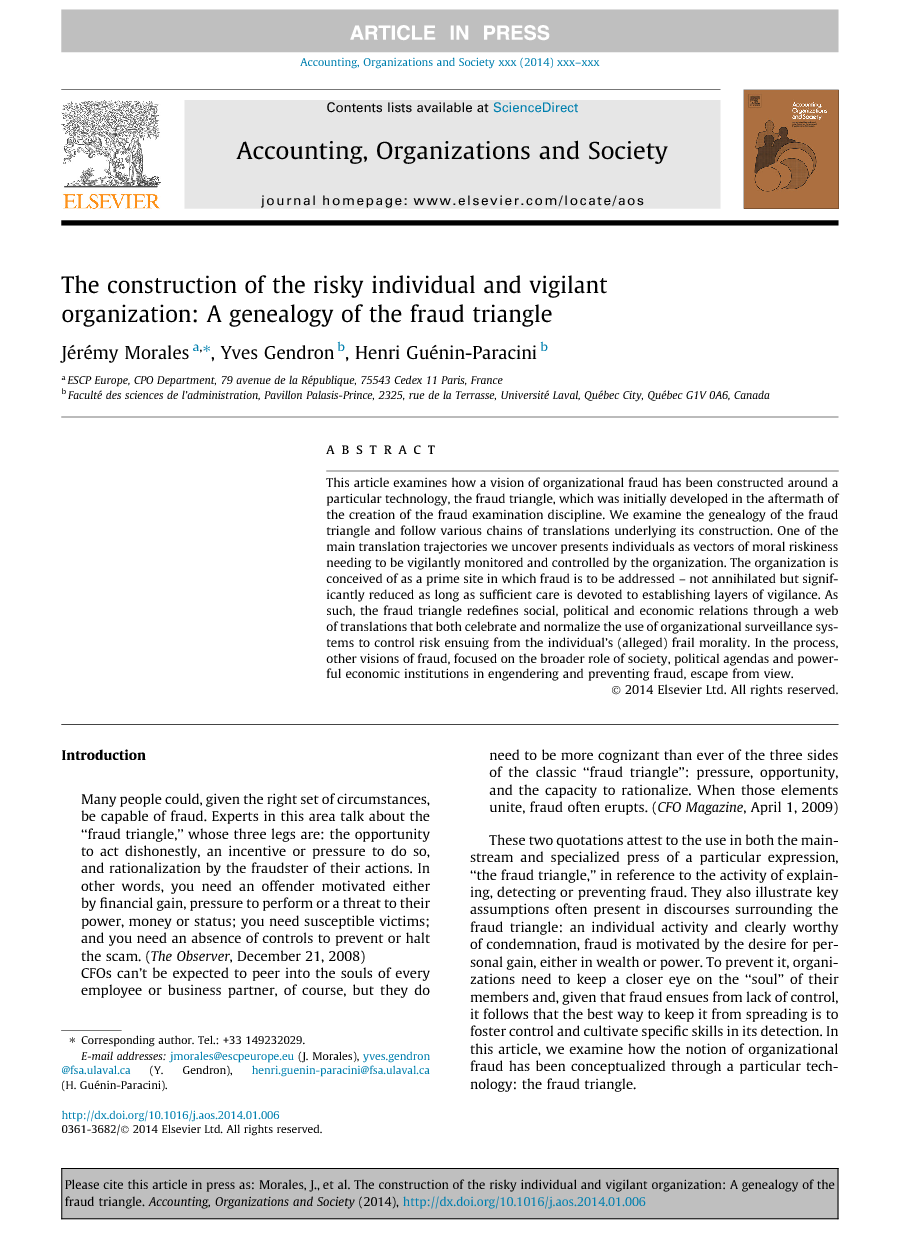 This article examines how a vision of organizational fraud has been constructed around a particular technology, the fraud triangle, which was initially developed in the aftermath of the creation of the fraud examination discipline. We examine the genealogy of the fraud triangle and follow various chains of translations underlying its construction. One of the main translation trajectories we uncover presents individuals as vectors of moral riskiness needing to be vigilantly monitored and controlled by the organization. The organization is conceived of as a prime site in which fraud is to be addressed – not annihilated but significantly reduced as long as sufficient care is devoted to establishing layers of vigilance. As such, the fraud triangle redefines social, political and economic relations through a web of translations that both celebrate and normalize the use of organizational surveillance systems to control risk ensuing from the individual’s (alleged) frail morality. In the process, other visions of fraud, focused on the broader role of society, political agendas and powerful economic institutions in engendering and preventing fraud, escape from view.

Our broad purpose has been to explore how an apparently descriptive but profoundly normative discourse on organizational fraud has emerged around the “fraud triangle” concept. Specifically, we followed the fraud triangle genealogy and analyzed its underlying chains of translations and problematizations. Our analysis indicates that fraud triangle articulations privilege individualistic explanations of fraud to the detriment of sociological explanations that highlight fraud’s sociopolitical nature and locates its causes in institutional and historical arrangements. Instead, the fraud triangle focuses attention on the fragility of individual morality and establishes the organization’s duties in controlling “risky individuals.” One of our main arguments is that the fraud triangle constitutes a rhetorical tool that professional associations have used to create and consolidate a field of knowledge and intervention around individual morality. Our analysis brings to the fore translations representing the fraud triangle as a credible technology that allows fraud specialists to speak authoritatively and intervene, in certain ways, in organizational fraud. In so doing, a certain discourse of normality gains legitimacy through the recruitment of allies around and fabrication of a concept that appears to be technical and descriptive, but contains a very specific vision of fraud. The feeling of neutrality is sustained by a series of illustrations focused on the least controversial examples. This also serves to present fraud as “inherently” unacceptable. Lumping these “serious acts” (e.g., bribery, misappropriation of funds) with trivial deviances (e.g., arriving late at work, taking long breaks) and more controversial actions (e.g., working more slowly than asked by the hierarchy, workplace resistance) then serves to justify considering any “workplace deviant behavior” as a fraud that should be systematically condemned, deterred and punished. Fraud is constituted, therefore, as reprehensible and immoral, though relatively controllable when organizations establish appropriate surveillance systems. The notion that morality boundaries vary in time and space (Douglas, 1966) is ignored. These findings contribute to our understanding of the links between fraud, organizational control and society. Previous studies argued that today’s society is characterized by a proliferation of control and audit technologies to restore trust – but that basically promote distrust (Power, 1997). Our study can be viewed as an examination of the problem of trustworthiness. We showed that a climate of suspicion is promoted in the fraud triangle literature and that the organization is deemed a legitimate site for restoring trust through intervention. Our analysis also indicates that technologies of organizational control and surveillance are influenced by moral judgments about what is normal and what is unacceptable deviance. Promoted in the name of reason and economic commonsense, the fraud triangle is a technology of fraud risk management that simultaneously targets individual character and organizational studiousness. The triangle sustains normalizing patterns that aim to shape identities of risky individuals whose frail morality needs to be tightly controlled and disciplined by the organization. In so doing, socio-historical visions of fraud are marginalized and relegated to the periphery of the field.