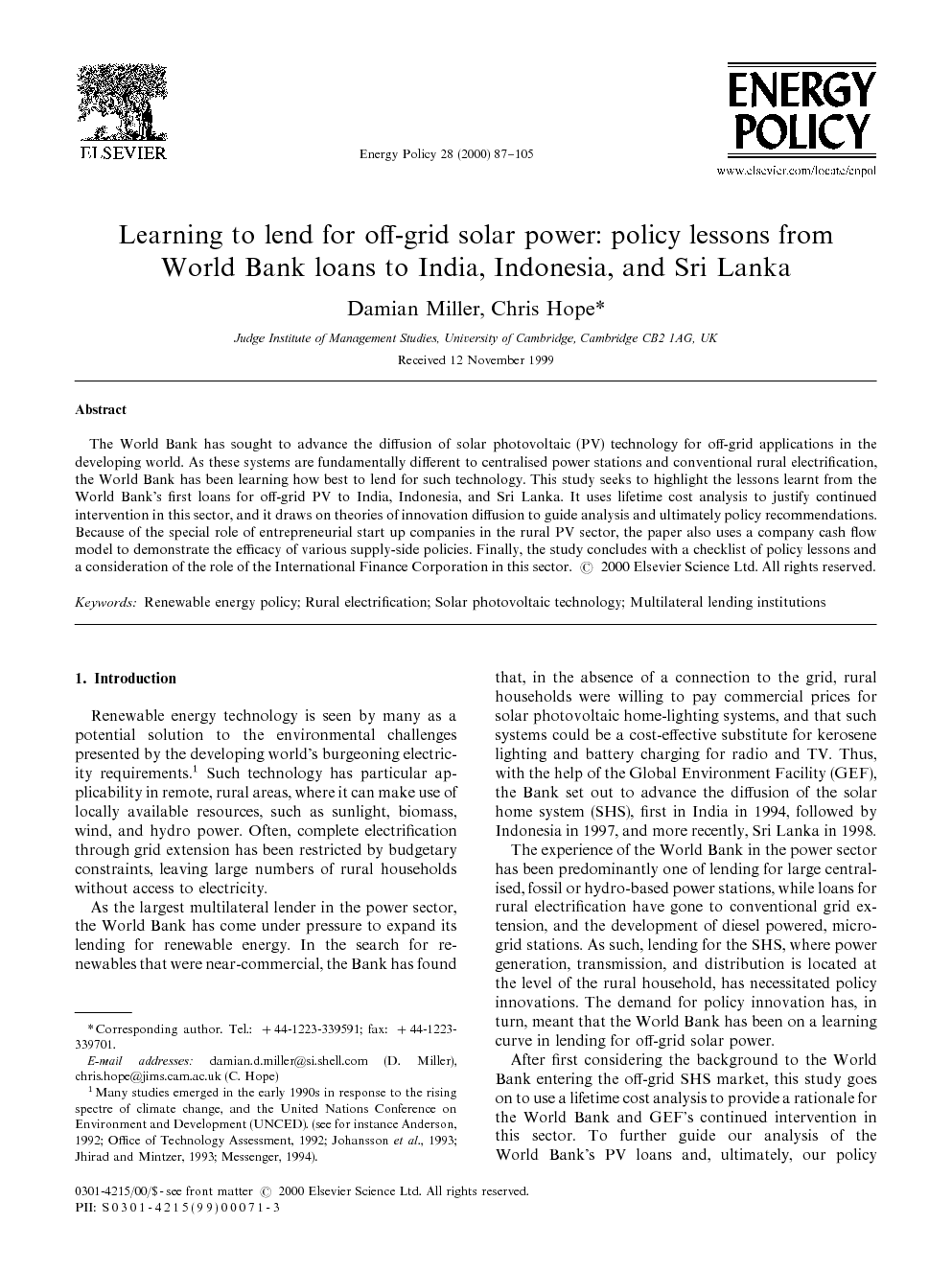 The World Bank has sought to advance the diffusion of solar photovoltaic (PV) technology for off-grid applications in the developing world. As these systems are fundamentally different to centralised power stations and conventional rural electrification, the World Bank has been learning how best to lend for such technology. This study seeks to highlight the lessons learnt from the World Bank's first loans for off-grid PV to India, Indonesia, and Sri Lanka. It uses lifetime cost analysis to justify continued intervention in this sector, and it draws on theories of innovation diffusion to guide analysis and ultimately policy recommendations. Because of the special role of entrepreneurial start up companies in the rural PV sector, the paper also uses a company cash flow model to demonstrate the efficacy of various supply-side policies. Finally, the study concludes with a checklist of policy lessons and a consideration of the role of the International Finance Corporation in this sector.

Renewable energy technology is seen by many as a potential solution to the environmental challenges presented by the developing world's burgeoning electricity requirements.1 Such technology has particular applicability in remote, rural areas, where it can make use of locally available resources, such as sunlight, biomass, wind, and hydro power. Often, complete electrification through grid extension has been restricted by budgetary constraints, leaving large numbers of rural households without access to electricity. As the largest multilateral lender in the power sector, the World Bank has come under pressure to expand its lending for renewable energy. In the search for renewables that were near-commercial, the Bank has found that, in the absence of a connection to the grid, rural households were willing to pay commercial prices for solar photovoltaic home-lighting systems, and that such systems could be a cost-effective substitute for kerosene lighting and battery charging for radio and TV. Thus, with the help of the Global Environment Facility (GEF), the Bank set out to advance the diffusion of the solar home system (SHS), first in India in 1994, followed by Indonesia in 1997, and more recently, Sri Lanka in 1998. The experience of the World Bank in the power sector has been predominantly one of lending for large centralised, fossil or hydro-based power stations, while loans for rural electrification have gone to conventional grid extension, and the development of diesel powered, micro-grid stations. As such, lending for the SHS, where power generation, transmission, and distribution is located at the level of the rural household, has necessitated policy innovations. The demand for policy innovation has, in turn, meant that the World Bank has been on a learning curve in lending for off-grid solar power. After first considering the background to the World Bank entering the off-grid SHS market, this study goes on to use a lifetime cost analysis to provide a rationale for the World Bank and GEF's continued intervention in this sector. To further guide our analysis of the World Bank's PV loans and, ultimately, our policy prescriptions, we then turn briefly to theories on innovation diffusion. Because of the historically significant role of the entrepreneurial start up company in this sector, and the limitations of cash-flow, our analysis also employs a company cash flow model to assess the efficacy of various supply-side policy options. Finally, we conclude with a checklist of policy recommendations and a consideration of the future of World Bank lending in this sector, with particular attention given to the emerging role of the International Finance Corporation (IFC).