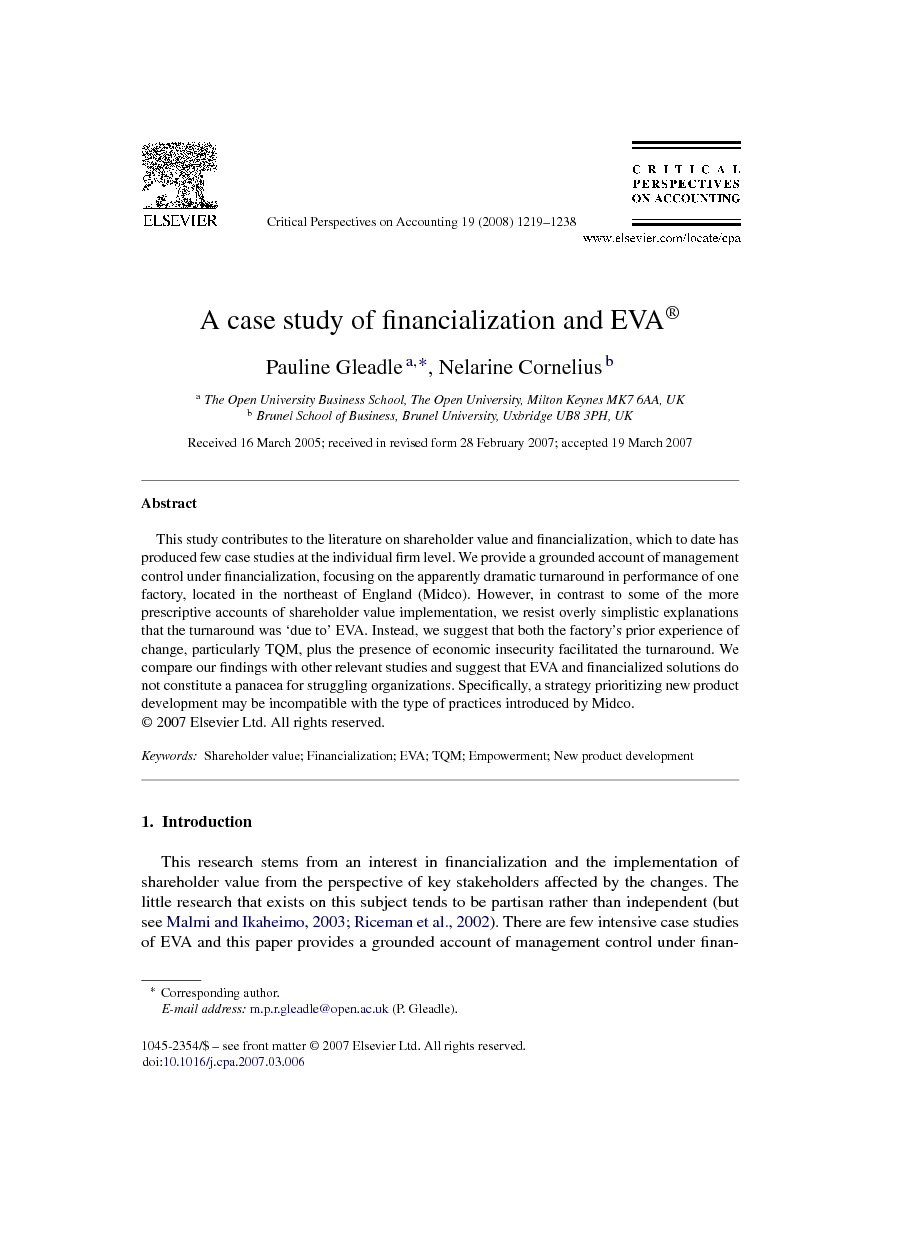 This study contributes to the literature on shareholder value and financialization, which to date has produced few case studies at the individual firm level. We provide a grounded account of management control under financialization, focusing on the apparently dramatic turnaround in performance of one factory, located in the northeast of England (Midco). However, in contrast to some of the more prescriptive accounts of shareholder value implementation, we resist overly simplistic explanations that the turnaround was ‘due to’ EVA. Instead, we suggest that both the factory's prior experience of change, particularly TQM, plus the presence of economic insecurity facilitated the turnaround. We compare our findings with other relevant studies and suggest that EVA and financialized solutions do not constitute a panacea for struggling organizations. Specifically, a strategy prioritizing new product development may be incompatible with the type of practices introduced by Midco.

This research stems from an interest in financialization and the implementation of shareholder value from the perspective of key stakeholders affected by the changes. The little research that exists on this subject tends to be partisan rather than independent (but see Malmi and Ikaheimo, 2003 and Riceman et al., 2002). There are few intensive case studies of EVA and this paper provides a grounded account of management control under financialization. The focus is on a factory, Midco, in the northeast of England, chosen because of the apparently dramatic turnaround achieved during a relatively short period of time. The paper's key contribution is to describe the way in which EVA was implemented. While our focus is upon local management, we provide contextual information on how Midco's financial situation was communicated to the shop floor and how corporate solutions were sold to them. This can be viewed as part of a complex whole or as the next stage of a process that had been previously manifest by the introduction of TQM. There are two main strands to this paper. Firstly, the story itself is one of the successful implementation in financial terms of EVA. This result reflects the context: it is not that EVA is a magic solution, but that prior experience of change, plus economic insecurity, provided conditions in which EVA could work. Secondly, we explore the implications of our findings, comparing those from Midco against findings from the FWAP (Ezzamel et al., 2004), Conglom (Ezzamel et al., in press) and Kaedtler and Sperling, 2002a and Kaedtler and Sperling, 2002b case studies. The paper is structured as follows. First, we explore the phenomenon of financialization in the context of shareholder value and coupon pool capitalism.1 Following earlier work of Armstrong, 1985 and Armstrong, 1986 and Miller and O’Leary (1994), we suggest that these frameworks might provide further insights into the implementation of shareholder value. After discussing methodology and methods, we introduce the case of Midco, concentrating on the Team Valley factory in the northeast of England during a period from the late 1980s until 1995. This period saw a dramatic turnaround in fortunes of the plant. In our discussion, we explore likely reasons for the outcomes in Midco, focusing on the roles played by particular organizational actors and on Midco's particular, prior, history of TQM. We then broaden the discussion to compare the Midco outcomes with those in the studies mentioned above so as to extract possible new insights. The paper concludes by returning to the original research questions and suggests that the specific outcomes in Midco were attributable to particular local conditions: Midco's prior experience of change and the presence of economic insecurity. Finally, we draw out the implications for further research.

Returning to our research aims this paper has provided a grounded account of management control under financialization. While the Midco case can be regarded as a ‘success story’ for financialization and EVA, this result reflects the context. Specifically, prior experience of change and in particular the implementation of a version of TQM stressing employee empowerment provided at least part of the conditions in which EVA could work. This prior experience of change allied with the presence of economic insecurity facilitated the dramatic turnaround of the TV factory. In comparing the Midco findings with those in other relevant studies we argue that where new product development constitutes an important part of company strategy, the approach adopted by Midco would be unlikely to ‘work.’ Hopefully this research will help convince other academics of the benefits of exploring management control under financialization from a perspective other than that of top management or shareholders. Further case studies could add to the body of empirical evidence about the interaction of management control with financialization. In particular, subsequent cases could add the voice of the shop floor which has been largely missing from the research on financialization to date (but see Conglom). Moreover, more ethnographically based studies would be better placed to evaluate the extent and forms of any resistance to the changes. Finally, further case study research could adopt a longer-term orientation similar to that in the Conglom and the Froud et al. (2006) studies so as to understand more about the process of financialization and its consequences at the individual firm level.