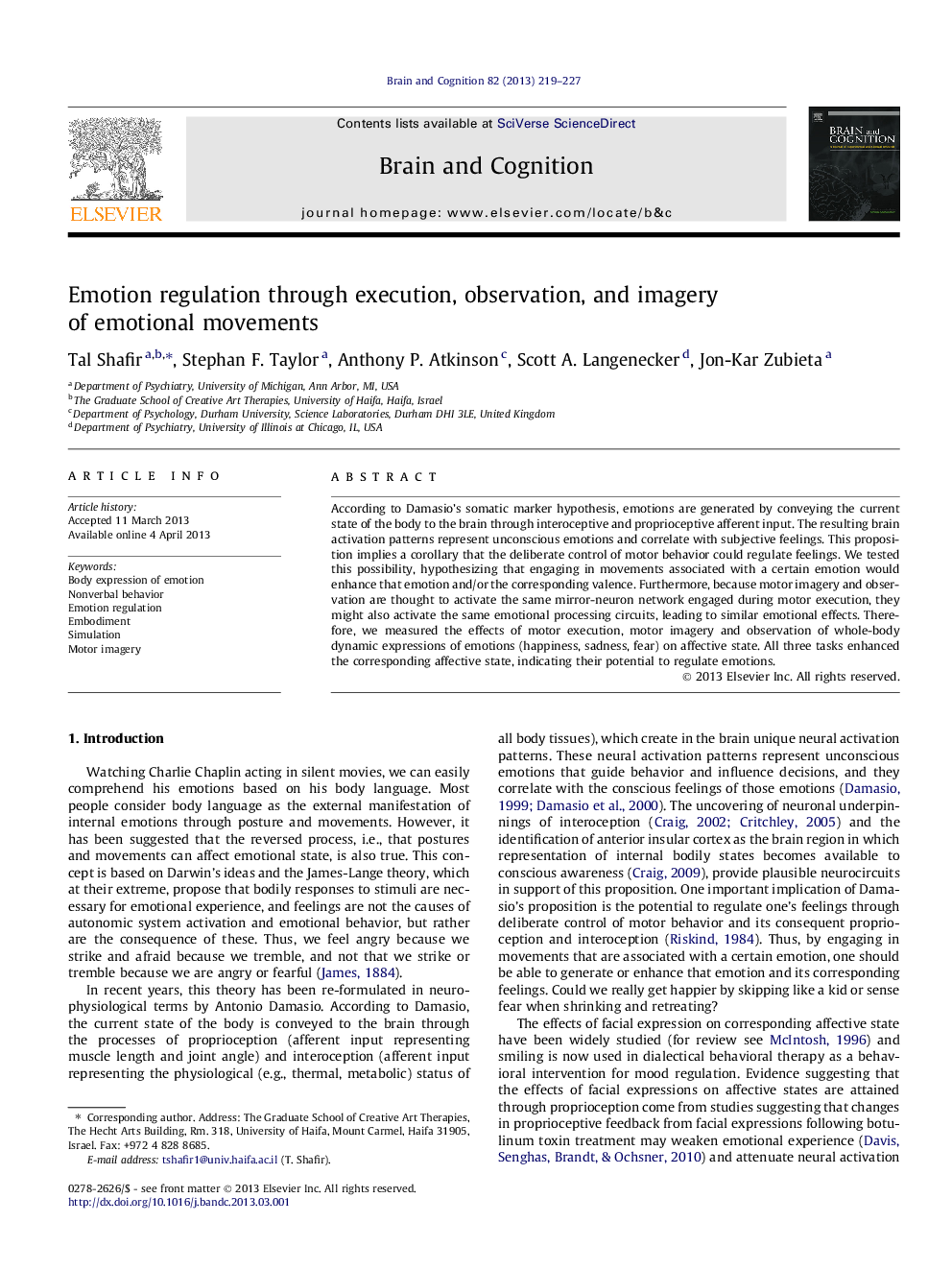 According to Damasio’s somatic marker hypothesis, emotions are generated by conveying the current state of the body to the brain through interoceptive and proprioceptive afferent input. The resulting brain activation patterns represent unconscious emotions and correlate with subjective feelings. This proposition implies a corollary that the deliberate control of motor behavior could regulate feelings. We tested this possibility, hypothesizing that engaging in movements associated with a certain emotion would enhance that emotion and/or the corresponding valence. Furthermore, because motor imagery and observation are thought to activate the same mirror-neuron network engaged during motor execution, they might also activate the same emotional processing circuits, leading to similar emotional effects. Therefore, we measured the effects of motor execution, motor imagery and observation of whole-body dynamic expressions of emotions (happiness, sadness, fear) on affective state. All three tasks enhanced the corresponding affective state, indicating their potential to regulate emotions.

In summary, our study demonstrates that motor execution, observation and imagery of whole body emotional movements can enhance the corresponding affective state, and could therefore be used to assist in regulation of one’s own emotions and recognition of others’ emotions. In addition, our finding that observation and imagery of whole body emotional expressions can enhance corresponding affective state supports the notion of embodied simulation as a plausible mechanism underlying emotion recognition and empathy. Role of the funding source This work was supported by the Phil F. Jenkins Foundation and Grant UL1RR024986 from the National Center for Research Resources. The content is solely the responsibility of the authors and does not necessarily represent the official views of the National Center for Research Resources or the National Institutes of Health. Acknowledgments We thank John Thoresen and Lisong Ni for their help with the EyesWeb ‘QoM’ analysis, and Heng Wang for his excellent wide-ranging technical assistance. We are also grateful to the study participants and to Mark Everson, Dave Hsu, Kristine Konz, Janna Kryscynski, Gahl Liberzon, Brian Mickey, Steve Reily, Preeti Samudra and Sara Weisenbach for volunteering their time and feedback during the development of the experimental and motor-sequence teaching procedures.