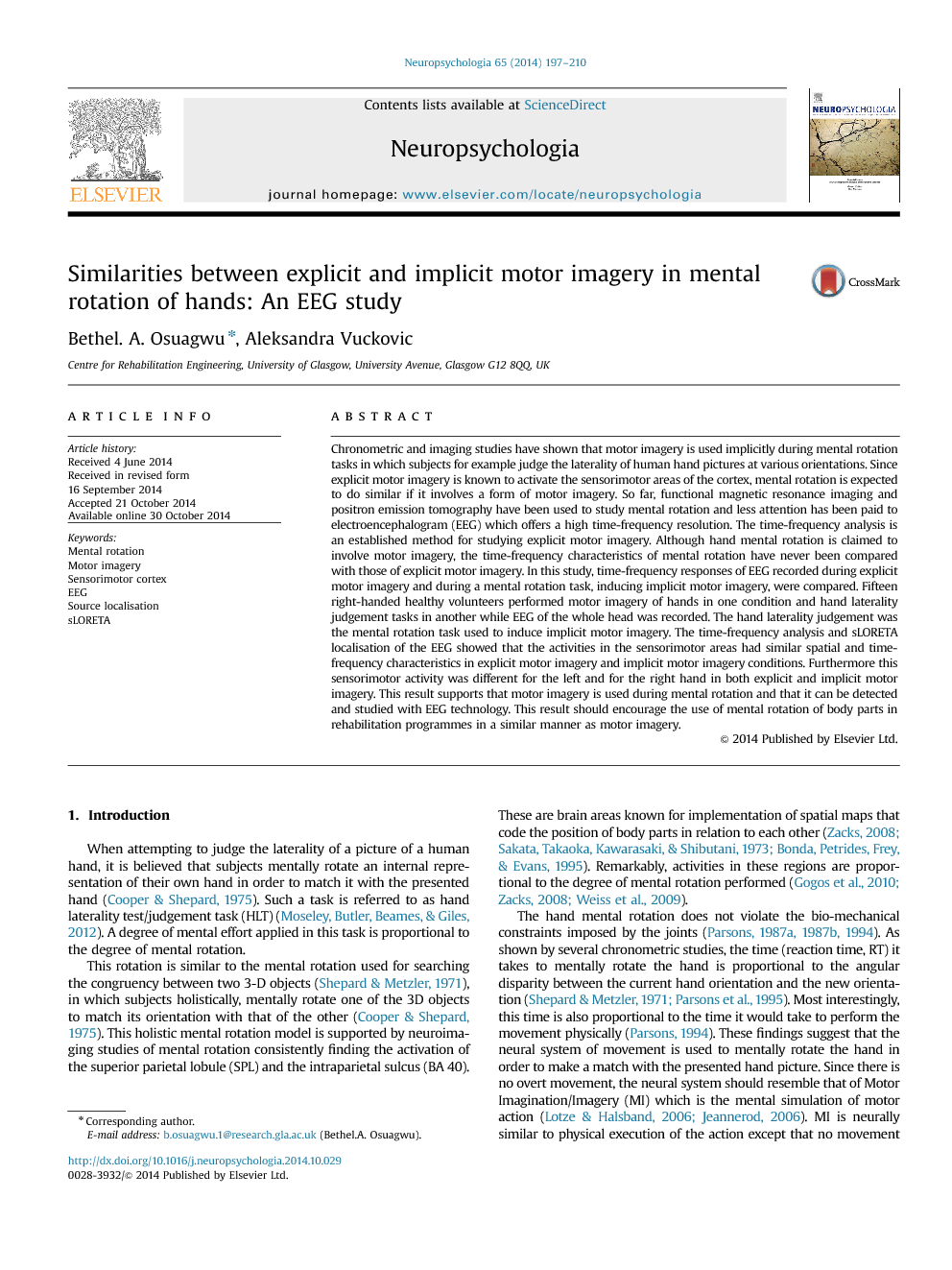 When attempting to judge the laterality of a picture of a human hand, it is believed that subjects mentally rotate an internal representation of their own hand in order to match it with the presented hand (Cooper & Shepard, 1975). Such a task is referred to as hand laterality test/judgement task (HLT) (Moseley, Butler, Beames, & Giles, 2012). A degree of mental effort applied in this task is proportional to the degree of mental rotation. This rotation is similar to the mental rotation used for searching the congruency between two 3-D objects (Shepard & Metzler, 1971), in which subjects holistically, mentally rotate one of the 3D objects to match its orientation with that of the other (Cooper & Shepard, 1975). This holistic mental rotation model is supported by neuroimaging studies of mental rotation consistently finding the activation of the superior parietal lobule (SPL) and the intraparietal sulcus (BA 40). These are brain areas known for implementation of spatial maps that code the position of body parts in relation to each other (Zacks, 2008, Sakata et al., 1973 and Bonda et al., 1995). Remarkably, activities in these regions are proportional to the degree of mental rotation performed (Gogos et al., 2010, Zacks, 2008 and Weiss et al., 2009). The hand mental rotation does not violate the bio-mechanical constraints imposed by the joints (Parsons, 1987a, Parsons, 1987b and Parsons, 1994). As shown by several chronometric studies, the time (reaction time, RT) it takes to mentally rotate the hand is proportional to the angular disparity between the current hand orientation and the new orientation (Shepard and Metzler, 1971 and Parsons et al., 1995). Most interestingly, this time is also proportional to the time it would take to perform the movement physically (Parsons, 1994). These findings suggest that the neural system of movement is used to mentally rotate the hand in order to make a match with the presented hand picture. Since there is no overt movement, the neural system should resemble that of Motor Imagination/Imagery (MI) which is the mental simulation of motor action (Lotze and Halsband, 2006 and Jeannerod, 2006). MI is neurally similar to physical execution of the action except that no movement is observed. During the mental rotation tasks, subjects are often unaware of imagination of movement. For this reason the term ‘implicit MI’ is used to describe the unrequested/unconscious imagination of movement during mental rotation tasks (Parsons, 2001 and Parsons et al., 1995). Explicit MI therefore refers to a conscious motor imagination. Implicit MI in mental rotation of body parts is an idea supported by many studies (Vingerhoets et al., 2002, Cooper and Shepard, 1975, Parsons, 1987a, Parsons, 1987b, Parsons, 1994, Parsons et al., 1995 and Wexler et al., 1998). Several brain areas known to be active during explicit MI have been found active during the mental rotation tasks (Zacks, 2008, Vingerhoets et al., 2002 and Parsons et al., 1995). Parsons and colleagues used mental rotation induced by HLT to show that apart from the primary sensorimotor cortices, all the brain regions known to participate in the planning and execution of movement were activated by mental rotation of hands (Parsons et al., 1995). So far extensive neuroimaging studies of mental rotation have been done using PET and fMRI which offer a high spatial resolution. EEG is a technology offering a higher temporal and frequency resolution which is useful in studying the dynamic brain processes. Time-frequency analysis of EEG is a well-established technique used to study MI (Pfurtscheller, Scherer, Müller-Putz, & Lopes da Silva, 2008). Although hand mental rotation is claimed to involve MI, the time-frequency characteristics of mental rotation have never been compared with those of MI. Such an analysis is necessary to establish the relationship between MI and hand mental rotation. Previous 3D objects and alphanumeric based mental rotation studies (Riečansky` and Katina, 2010 and Gill et al., 1998) using EEG did not describe the complete time-frequency characteristics. In a recent study, Chen and colleague (Chen, Bin, Daly, & Gao, 2013) only analysed an early induced EEG activity during hand mental rotation induced by HLT. Their experimental design involved subjects pressing buttons with their hands to indicate their judgements. Since the subjects were believed to be mentally rotating their hands, pressing the button with the same hands could interfere with the results. An important, yet unanswered question that would further confirm similarity between explicit and implicit MI is whether it is possible to discriminate between left and right mental rotation using EEG signal recorded during a hand mental rotation task such as HLT. The present study has three main objectives. (1) To study the time-frequency dynamics and spatial localisation of sensorimotor activities during mental rotation of hands induced by HLT. (2) To test whether it is possible to discriminate between left and right hand mental rotation using EEG recorded during HLT. (3) To compare time-frequency responses over the sensorimotor cortices between implicit MI (in HLT) and explicit MI. The knowledge gained by studying the above is relevant to understanding the mental rotation process. Furthermore establishing that implicit MI is involved in mental rotation and that it is similar to explicit MI can open new areas of application in which mental rotation induced implicit MI can be used to complement explicit MI used in rehabilitation of movement (Cramer et al., 2007, Dijkerman et al., 2004, Driskell et al., 1994 and Grangeon et al., 2012). Patients who find it difficult to perform explicit MI due to loss of proprioception/sensation for example following incomplete spinal cord injury may use the implicit MI automatically invoked in the brain to activate the motor cortex in a similar manner as explicit MI in rehabilitation. Hand mental rotation induced with HLT is already in use in the treatment of complex regional pain (Moseley et al., 2012, Walz et al., 2013 and Bowering et al., 2013) and its use is expected to widen (Moseley et al., 2012).

During the hand mental rotation task, the recorded brain activity had similar spatial and time-frequency characteristics to those found during explicit motor imagery. The sensorimotor activity is known to be distinctive for left and right hand explicit MI. It was shown here that the sensorimotor activity was also distinctive for the left and right hand mental rotation. These suggest that implicit MI used during the mental rotation of hand in HLT is similar to explicit MI. These results indicate that mental rotation of body parts can be used to complement MI in areas of rehabilitation in which MI is used for therapeutic purposes. Patients who are unable to perform explicit MI could use implicit MI. Patients can easily understand a laterality judgement task than a task involving movement imagination which is often abstract. Unlike in the case of MI therapists can easily tell when the patients are correctly performing a judgement task.