عنوان انگلیسی
Self-imagery in individuals with high body dissatisfaction: The effect of positive and negative self-imagery on aspects of the self-concept
دانلود فوری مقاله + سفارش ترجمه 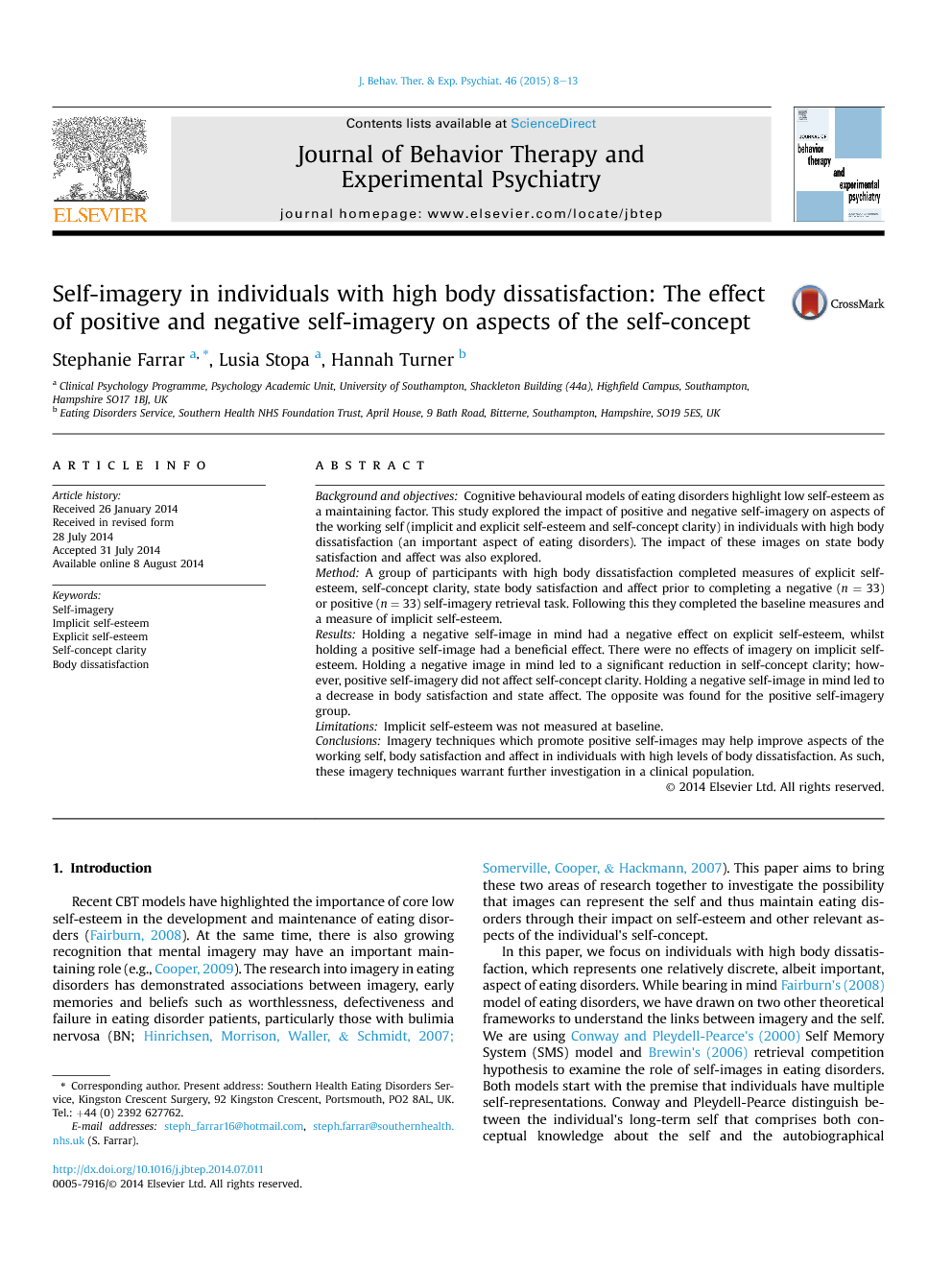 Recent CBT models have highlighted the importance of core low self-esteem in the development and maintenance of eating disorders (Fairburn, 2008). At the same time, there is also growing recognition that mental imagery may have an important maintaining role (e.g., Cooper, 2009). The research into imagery in eating disorders has demonstrated associations between imagery, early memories and beliefs such as worthlessness, defectiveness and failure in eating disorder patients, particularly those with bulimia nervosa (BN; Hinrichsen et al., 2007 and Somerville et al., 2007). This paper aims to bring these two areas of research together to investigate the possibility that images can represent the self and thus maintain eating disorders through their impact on self-esteem and other relevant aspects of the individual's self-concept. In this paper, we focus on individuals with high body dissatisfaction, which represents one relatively discrete, albeit important, aspect of eating disorders. While bearing in mind Fairburn's (2008) model of eating disorders, we have drawn on two other theoretical frameworks to understand the links between imagery and the self. We are using Conway and Pleydell-Pearce's (2000) Self Memory System (SMS) model and Brewin's (2006) retrieval competition hypothesis to examine the role of self-images in eating disorders. Both models start with the premise that individuals have multiple self-representations. Conway and Pleydell-Pearce distinguish between the individual's long-term self that comprises both conceptual knowledge about the self and the autobiographical knowledge store, and the individual's ‘working self’ – a sub-set of the long-term self that is created to achieve specific goals. It is possible to think of the working self as the individual's current ‘on-line’ self and we hypothesised that images activated in response to certain situations can represent this working self. Brewin's retrieval competition hypothesis sits well with the SMS model because he argues that different self-representations compete for retrieval. The repeated activation of a negative working self may increase its accessibility and inhibit the availability of alternative positive representations. We propose that negative self-images in BN represent a working self that is retrieved when thinking about eating, weight or shape. The negative content and affect associated with these images (e.g., Hinrichsen et al., 2007) suggests that this working self is likely to be characterised by negative beliefs and uncertainty about the self and high levels of body dissatisfaction. As described above, in this study, we investigated the impact of positive and negative self-imagery on the working self in a group of individuals with high body dissatisfaction. We drew on parallel work in social anxiety and operationalised the working self in terms of self-esteem (implicit and explicit) and self-concept clarity (see Hulme, Hirsch, & Stopa, 2012 for more details). The rationale for this choice is explained below. Self-esteem represents an active evaluative attitude towards the self (Demo & Savin-Williams, 1992) and is central to Fairburn's (2008) model. Self-esteem comprises both implicit and explicit components, which tap into two distinct, albeit related, constructs (Hetts & Pelham, 2001). Implicit self-esteem is formed primarily through non-conscious automatic processing (Greenwald & Banaji, 1995) and is therefore relatively unaffected by conscious information or manipulation (Hetts & Pelham, 2001). In our view, self-images are likely to tap into both systems, despite Fairburn's focus on explicit self-esteem. Investigations of implicit self-esteem in eating disorders have already demonstrated the expected discrepancies between implicit and explicit self-esteem and shown that implicit self-esteem remains positive even in the presence of low explicit self-esteem (Cockerham et al., 2009 and Hoffmeister et al., 2010). In fact, in Cockerham et al.'s (2009) study, implicit self-esteem was higher in the eating disorder compared to the control group. Further evidence supporting the argument for considering implicit as well as explicit self-esteem in eating disorders comes from Vanderlinden et al.'s (2009) study on patients with eating disorders in which positive feedback improved implicit self-esteem, but negative feedback had no impact. By comparison, in the patient group explicit self-esteem was effected in the expected direction by both positive and negative feedback, whereas neither type of feedback impacted on the control group's self-esteem. Self-concept clarity describes the degree to which individuals hold a clear, consistent, and stable view of the self (Campbell et al., 1996). Certainty about one's self-concept can contribute to a sense of control over future outcomes, which in turn, supports a positive and confident view of the self (Baumgardner, 1990). Conversely, uncertainty about the self-concept is associated with low self-esteem, less positive affect and lower congruence between perceptions of current and past behaviour (Baumgardner, 1990 and Campbell, 1990). Although self-concept clarity has not been investigated in individuals with eating disorders, the discrepancy between implicit and explicit self-esteem may create doubt and uncertainty about the self and cause difficulties in maintaining a consistent self-view (Cockerham et al., 2009). The current study investigated the impact of holding positive and negative self-images on the working self in a group of participants with high body dissatisfaction. We hypothesised that negative self-image retrieval would be associated with a negative working self, demonstrated by an increase in negative explicit self-esteem, a decrease in positive explicit self-esteem and a reduction in self-concept clarity. In contrast, we expected that positive self-image retrieval would be associated with a more positive working self. The study also aimed to explore whether manipulating self-imagery impacted on implicit self-esteem in this population. Given that individuals were asked to retrieve an image of their body, we also predicted that negative self-imagery retrieval would be associated with reduced body satisfaction, increased negative affect and reduced positive affect and that positive self-image retrieval would be associated with improvements on these measures.