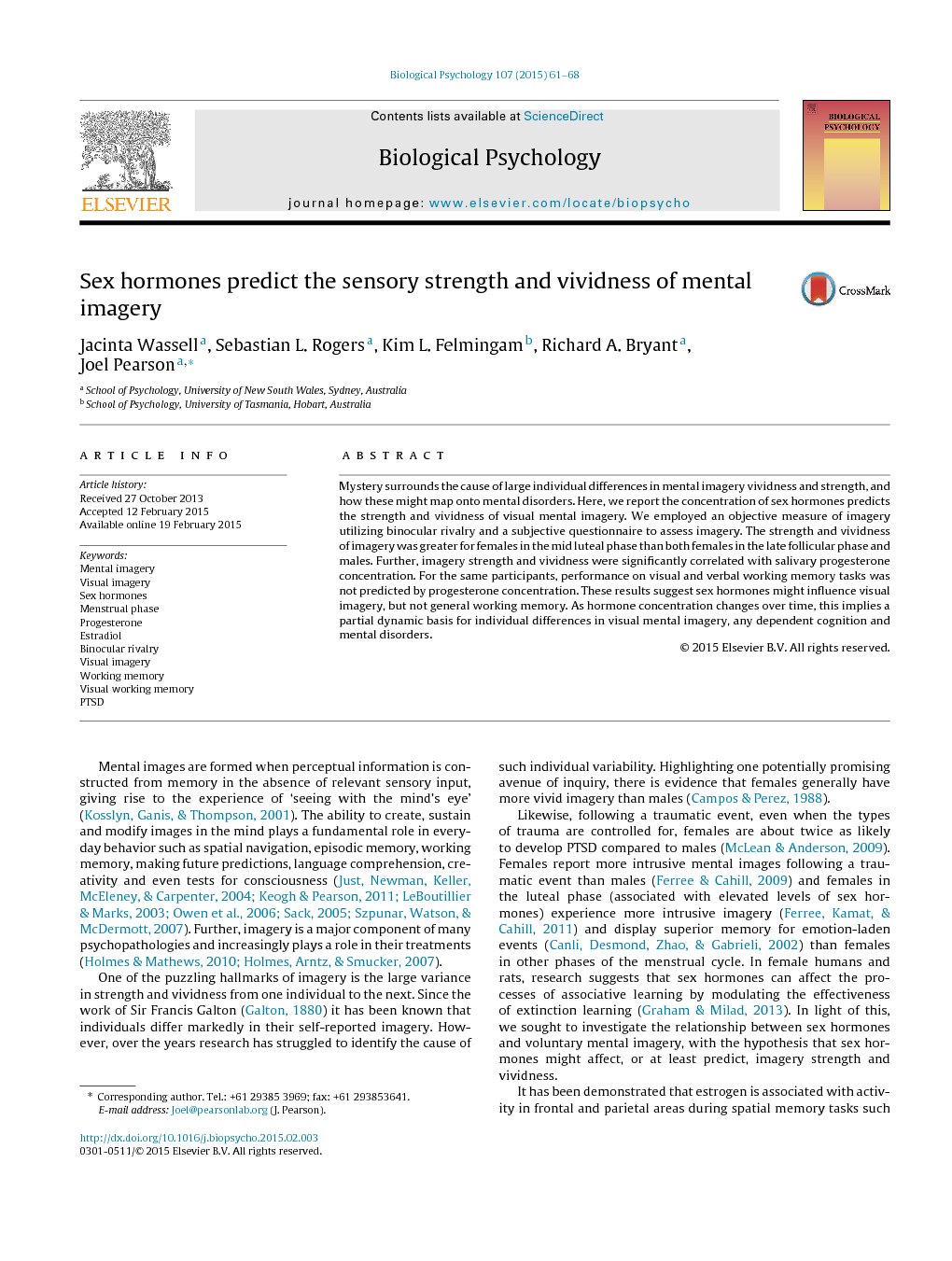 Mystery surrounds the cause of large individual differences in mental imagery vividness and strength, and how these might map onto mental disorders. Here, we report the concentration of sex hormones predicts the strength and vividness of visual mental imagery. We employed an objective measure of imagery utilizing binocular rivalry and a subjective questionnaire to assess imagery. The strength and vividness of imagery was greater for females in the mid luteal phase than both females in the late follicular phase and males. Further, imagery strength and vividness were significantly correlated with salivary progesterone concentration. For the same participants, performance on visual and verbal working memory tasks was not predicted by progesterone concentration. These results suggest sex hormones might influence visual imagery, but not general working memory. As hormone concentration changes over time, this implies a partial dynamic basis for individual differences in visual mental imagery, any dependent cognition and mental disorders.

Mental images are formed when perceptual information is constructed from memory in the absence of relevant sensory input, giving rise to the experience of ‘seeing with the mind's eye’ (Kosslyn, Ganis, & Thompson, 2001). The ability to create, sustain and modify images in the mind plays a fundamental role in everyday behavior such as spatial navigation, episodic memory, working memory, making future predictions, language comprehension, creativity and even tests for consciousness (Just et al., 2004, Keogh and Pearson, 2011, LeBoutillier and Marks, 2003, Owen et al., 2006, Sack, 2005 and Szpunar et al., 2007). Further, imagery is a major component of many psychopathologies and increasingly plays a role in their treatments (Holmes and Mathews, 2010 and Holmes et al., 2007). One of the puzzling hallmarks of imagery is the large variance in strength and vividness from one individual to the next. Since the work of Sir Francis Galton (Galton, 1880) it has been known that individuals differ markedly in their self-reported imagery. However, over the years research has struggled to identify the cause of such individual variability. Highlighting one potentially promising avenue of inquiry, there is evidence that females generally have more vivid imagery than males (Campos & Perez, 1988). Likewise, following a traumatic event, even when the types of trauma are controlled for, females are about twice as likely to develop PTSD compared to males (McLean & Anderson, 2009). Females report more intrusive mental images following a traumatic event than males (Ferree & Cahill, 2009) and females in the luteal phase (associated with elevated levels of sex hormones) experience more intrusive imagery (Ferree, Kamat, & Cahill, 2011) and display superior memory for emotion-laden events (Canli, Desmond, Zhao, & Gabrieli, 2002) than females in other phases of the menstrual cycle. In female humans and rats, research suggests that sex hormones can affect the processes of associative learning by modulating the effectiveness of extinction learning (Graham & Milad, 2013). In light of this, we sought to investigate the relationship between sex hormones and voluntary mental imagery, with the hypothesis that sex hormones might affect, or at least predict, imagery strength and vividness. It has been demonstrated that estrogen is associated with activity in frontal and parietal areas during spatial memory tasks such as mental rotation tasks (Schöning et al., 2007), and it has been linked to verbal fluency (Maki, Rich, & Rosenbaum, 2002), while progesterone in women correlates positively with visual perception (Broverman et al., 1981 and Wijayanto et al., 2009). Estradiol (an estrogenic hormone) is known to decrease inhibitory gamma-aminobutyric acid (GABA), known to play important inhibitory role in sensory perception (Edden et al., 2009, Rudick and Woolley, 2001, van Loon et al., 2013, Wallis and Luttge, 1980 and Yoon et al., 2010). In addition, estradiol has direct excitatory effects on cell membranes, leading to a decrease in firing thresholds and an increase in mean resting state activity (Smith, 1989, Toran-Allerand et al., 2002 and Wong and Moss, 1992). However, in many cases progesterone antagonizes estradiol actions and is thought to indirectly enhance the effects of GABA (Kokate et al., 1994, McEwen, 2001 and Reddy et al., 2004). Hormone cycle-related fluctuations in cognition and perception are difficult to accurately assess in humans, due to the antagonistic influence of progesterone and its effects on neural, perceptual and cognitive functioning (Becker, 2005 and Finocchi and Ferrari, 2011). Spikes in estradiol concentration can appear without co-occurring spikes in progesterone, but rises in progesterone are typically accompanied by high estradiol in the mid luteal phase of the menstrual cycle (Thorneycroft, Mishell, Stone, Kharma, & Nakamura, 1972). In addition, many human studies suffer from a reliance on self-report of menstrual stage, which may limit the reliability and accuracy of menstrual categorisation (Maki and Resnick, 2001 and Sherwin, 2005). The present study investigated the role of sex hormones in the individual differences in imagery strength by measuring levels of progesterone and 17β-estradiol (the predominant estrogenic hormone during reproductive years) and relating this to performance on objective and subjective indices of imagery strength and vividness. Recognizing that the processes of visual imagery and visual working memory overlap (Baddeley and Andrade, 2000, Keogh and Pearson, 2011 and Keogh and Pearson, 2014), we also controlled for visual and verbal working memory. We hypothesized that imagery would be strongest in females in the luteal phase of the menstrual cycle because both estrogen and progesterone are elevated in the luteal phase, and both of these hormones have been linked to enhanced performance on perceptual tasks.