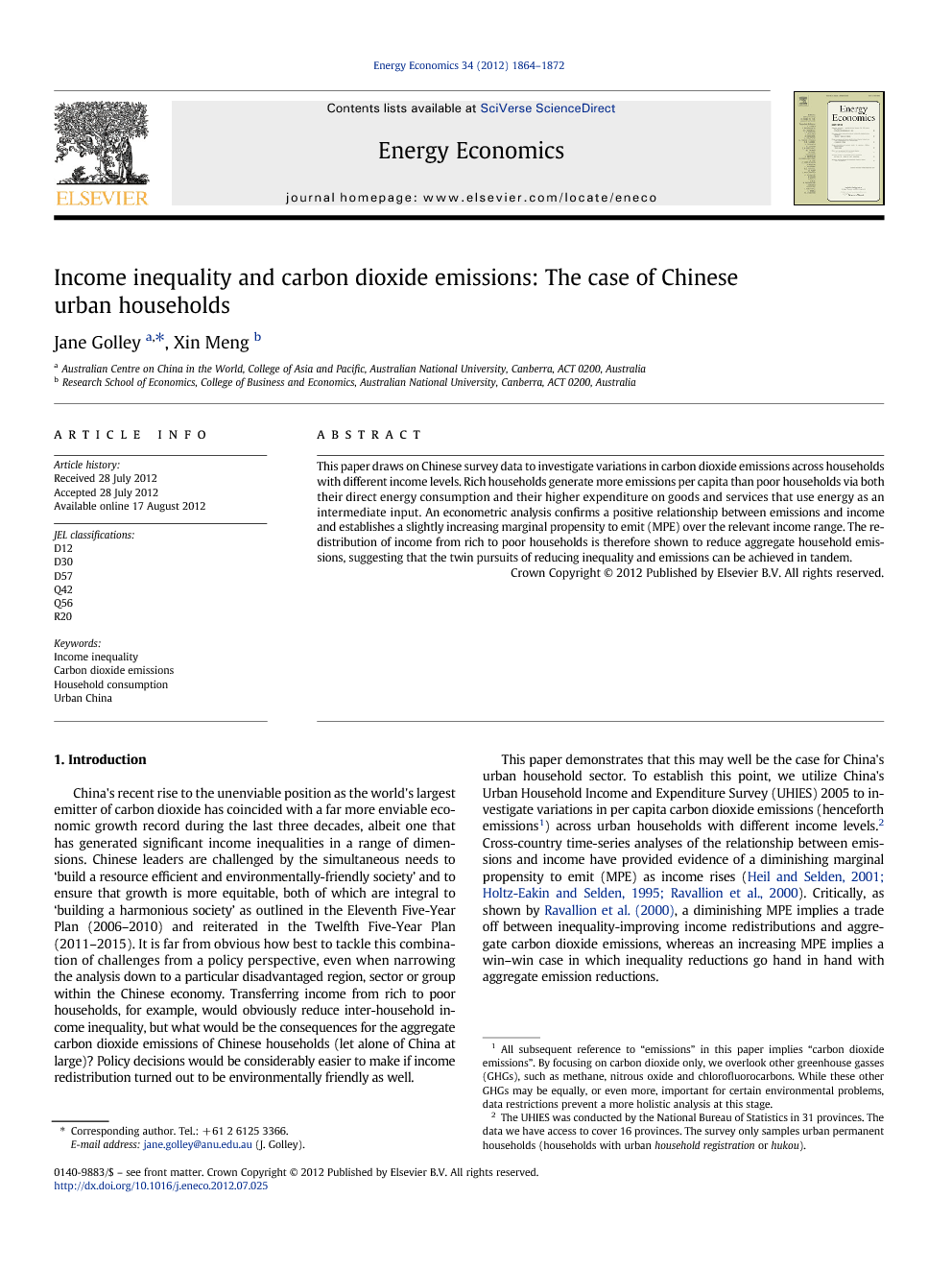 This paper draws on Chinese survey data to investigate variations in carbon dioxide emissions across households with different income levels. Rich households generate more emissions per capita than poor households via both their direct energy consumption and their higher expenditure on goods and services that use energy as an intermediate input. An econometric analysis confirms a positive relationship between emissions and income and establishes a slightly increasing marginal propensity to emit (MPE) over the relevant income range. The redistribution of income from rich to poor households is therefore shown to reduce aggregate household emissions, suggesting that the twin pursuits of reducing inequality and emissions can be achieved in tandem.

China's recent rise to the unenviable position as the world's largest emitter of carbon dioxide has coincided with a far more enviable economic growth record during the last three decades, albeit one that has generated significant income inequalities in a range of dimensions. Chinese leaders are challenged by the simultaneous needs to ‘build a resource efficient and environmentally-friendly society’ and to ensure that growth is more equitable, both of which are integral to ‘building a harmonious society’ as outlined in the Eleventh Five-Year Plan (2006–2010) and reiterated in the Twelfth Five-Year Plan (2011–2015). It is far from obvious how best to tackle this combination of challenges from a policy perspective, even when narrowing the analysis down to a particular disadvantaged region, sector or group within the Chinese economy. Transferring income from rich to poor households, for example, would obviously reduce inter-household income inequality, but what would be the consequences for the aggregate carbon dioxide emissions of Chinese households (let alone of China at large)? Policy decisions would be considerably easier to make if income redistribution turned out to be environmentally friendly as well. This paper demonstrates that this may well be the case for China's urban household sector. To establish this point, we utilize China's Urban Household Income and Expenditure Survey (UHIES) 2005 to investigate variations in per capita carbon dioxide emissions (henceforth emissions1) across urban households with different income levels.2 Cross-country time-series analyses of the relationship between emissions and income have provided evidence of a diminishing marginal propensity to emit (MPE) as income rises (Heil and Selden, 2001, Holtz-Eakin and Selden, 1995 and Ravallion et al., 2000). Critically, as shown by Ravallion et al. (2000), a diminishing MPE implies a trade off between inequality-improving income redistributions and aggregate carbon dioxide emissions, whereas an increasing MPE implies a win–win case in which inequality reductions go hand in hand with aggregate emission reductions. Ravallion et al. (2000: p. 653) acknowledge that consumer demand is ‘the most likely source of non-linearities in the effect of higher incomes on emissions, particularly given that the latter depend in large part on what goods are consumed within the economy’. They also make the critical observation that direct consumer demand for energy (i.e. fossil fuels) is only part of the story since ‘many goods which do not require fossil fuel combustion as part of their consumption do require it for production. Both the direct and indirect demands are relevant to carbon emissions’ (p. 653). Yet after making this observation, they then use estimates of national-level emissions based on fossil fuel use and cement production to calculate per capita emissions, which do not take consumers' indirect energy demand into account. Taking a consumer-based approach, numerous recent studies have highlighted how important this indirect energy consumption—and hence indirect emissions generation—can be. Wei et al. (2007), for example, attempt to quantify the direct and indirect energy requirements and related carbon emissions of Chinese urban and rural residents between 1999 and 2002, and show that 71% of urban household energy is consumed indirectly. Pachauri and Spreng (2002) show that indirect energy requirements account for close to half of the total energy consumption of Indian households, while Cohen et al. (2005) show that 61% of household energy is indirectly consumed in Brazil.3 When a more comprehensive measure of indirect emissions is included in each consumer's total emissions, it is far from clear that the MPE will still be diminishing, whether in cross-country time-series or single country cross-sectional analyses.4 The paper is structured as follows. Section 2 describes the methodology and data used to calculate each household's per capita energy consumption and emissions and presents the key results depicting the relationship between these two variables and per capita income. Our econometric analysis is presented in Section 3, followed by a consideration of the impact of income redistribution on aggregate household emissions in Section 4. Section 5 concludes.

This paper has focused on just one of the many sources contributing to China's new and unenviable position as the world's largest emitter of carbon dioxide: urban household consumption. Using urban household survey data, we examined the extent of variation in per capita energy consumption and emissions across households with different income levels. As expected, richer households emit more per capita both directly and indirectly. More interesting were the findings that poorer households are more emission intensive in their direct energy consumption because of their heavy reliance on coal, while richer households are more emission intensive in their indirect energy consumption. Our results indicated that 81% of Chinese urban household emissions in 2005 were generated indirectly through the energy inputs used in the production of goods consumed by those households. This percentage rose steadily through the income range, peaking at 89% for households in the richest decile, compared with just 61% for the poorest households. This combination of facts gave rise to a positive relationship between per capita total emissions and per capita income, driven by the rise in indirect emissions over the income range. Given that the sole purpose of all production is ultimately consumption (as Adam Smith pointed out centuries ago), a deeper understanding of the relationship between consumer choice—both between and within direct and indirect energy demand—and the emissions generated as a consequence is called for. This paper offered a small step in that direction. Our econometric analysis confirmed that the positive relationship between total emissions and income indicated an increasing marginal propensity to emit across income deciles, which was underpinned by an increasing marginal propensity to emit indirectly over the range and a slightly increasing marginal propensity to emit directly over the first nine deciles. After controlling for income, households with larger dwellings and a higher percentage of elderly members had higher direct and indirect emissions, while households in Beijing—one of the country's most developed urban areas—had higher indirect emissions relative to 14 of the 15 other provinces in the survey data. As Chinese household incomes continue to rise and as China's urbanization gathers pace, consumer choices are likely to follow trends established in the most developed urban cities. In combination with a rapidly aging population, evidence of an increasing MPE (even if only slight), and double-digit economic growth, it may be tempting to conclude that China's carbon dioxide emissions are on unstoppable upward trend, since all of these factors point in that direction. However, such a conclusion would be unwise based on cross-sectional results, given the potential for changes in consumer choices and production techniques. The former could be altered by the introduction of a carbon tax or changing attitudes toward “green consumption”, for example. And there are a number of ways of improving the latter, including efforts to promote energy efficiency in the manufacturing sector, to strengthen international cooperation in low-carbon technologies, to reduce the emissions associated with upstream production sectors in the booming construction sector, and to conserve energy in the lighting, heating and air-conditioning at the household level (Guan et al., 2009). With all of these possibilities, the future path of the world's top carbon dioxide emitter is very difficult to pin down—or up, as the case may be. Instead, our final conclusion is less far-reaching and more optimistic. Household-level income redistribution is certainly not an appropriate policy tool for tackling China's growing emissions—and nor did we set out to demonstrate that it was. What our results do allow us to conclude is that inequality-reducing income redistribution is unlikely to have a significantly detrimental impact on aggregate urban household carbon dioxide emissions. This is surely a positive finding for a country intent on building an environmentally friendly and harmonious society.