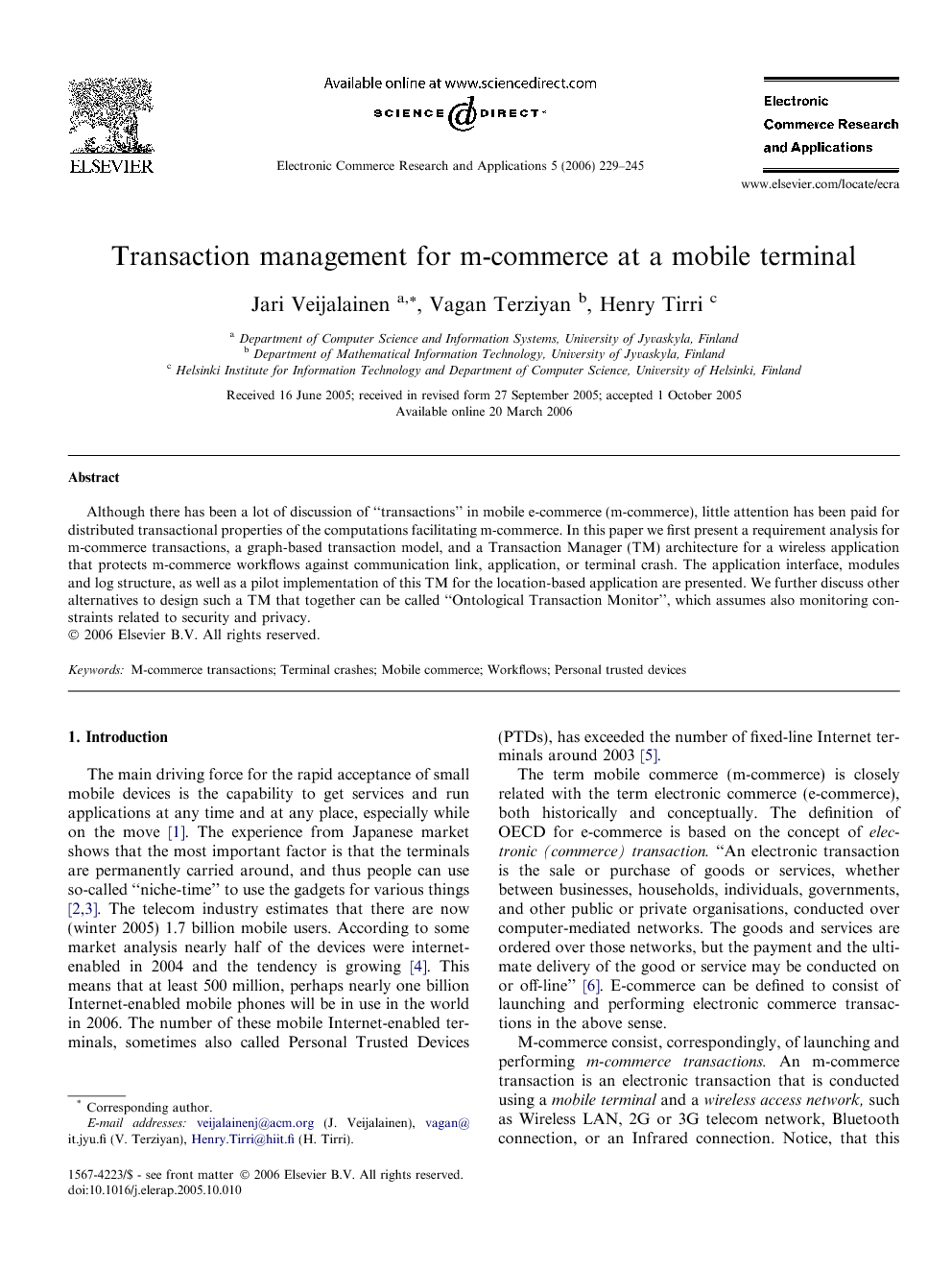 Although there has been a lot of discussion of “transactions” in mobile e-commerce (m-commerce), little attention has been paid for distributed transactional properties of the computations facilitating m-commerce. In this paper we first present a requirement analysis for m-commerce transactions, a graph-based transaction model, and a Transaction Manager (TM) architecture for a wireless application that protects m-commerce workflows against communication link, application, or terminal crash. The application interface, modules and log structure, as well as a pilot implementation of this TM for the location-based application are presented. We further discuss other alternatives to design such a TM that together can be called “Ontological Transaction Monitor”, which assumes also monitoring constraints related to security and privacy.

Currently one can see the emergence of at least five different kinds of m-commerce transaction types: Internet e-commerce over wireless access networks, location-based services, ticketing applications, retail shopping, and banking. M-commerce operates partially in a different environment than Internet e-commerce due to the special characteristics and constraints of the terminals, sometimes called Personal Trusted Devices, and networks, and the context, situations and circumstances that people use their PTDs while roaming. In this paper, we have analysed the business models and ensuing transactional requirements in the environment and deduce key ingredients for a transaction model necessary for m-commerce environments. We concentrated mostly on the two first types of m-commerce transactions mentioned above in this paper, namely mobile Internet e-commerce and location-based services. Central conclusions are that m-commerce transactions in a strong sense are needed. The key insight is that m-commerce transactions should be seen as distributed workflows with transactional properties. Their modelling can be based on RDAGs and their properties expressed using these. It is evident from the analysis of the m-commerce environment that only the first level below the root transaction is controllable by the root. The deeper levels in the execution hierarchy are dictated by the business relationships between the business actors and can neither be determined nor controlled by the customer launching the m-commerce transaction on her terminal. M-commerce transactions as transactional workflows are relatives of S-transactions, i.e. structurally RDAGs, long lasting, contain cancellations and real actions. A form of semantic atomicity (preferably certified delivery [28]) is the property they try to enforce. Another important conclusion is that the security and privacy issues must be combined in a different way with the transaction modelling concepts than before. This is mainly because the devices used to launch m-commerce transactions can be stolen by malicious people and thus the transaction root “hijacked” by them. Another issue related with loosing the device is that privacy can be jeopardized due to the information contained in the transaction logs or elsewhere within the device. The m-commerce environment is global, highly autonomous and heterogeneous due to roaming, different regulatory frameworks and existing and emerging business models. This causes roaming heterogeneity, a new form of heterogeneity, to emerge. That and other forms of heterogeneity make it worthwhile to develop standard solutions to reduce heterogeneity and make global m-commerce possible, an important task for Open Mobile Alliance. As the experience with Symbay shows, this is not always easy. An important conclusion is that the m-commerce transactions are important both conceptually and also pragmatically, especially when the mobile commerce revenues grow. Although at least to certain extent coherent view on them has been presented here, rendering e.g. standard software at the terminal feasible, much more detailed work is needed. Especially the marriage of Semantic Web and transaction concepts requires a lot of work, but promises interesting results. The formal m-commerce transaction model with its typical properties is for further study.