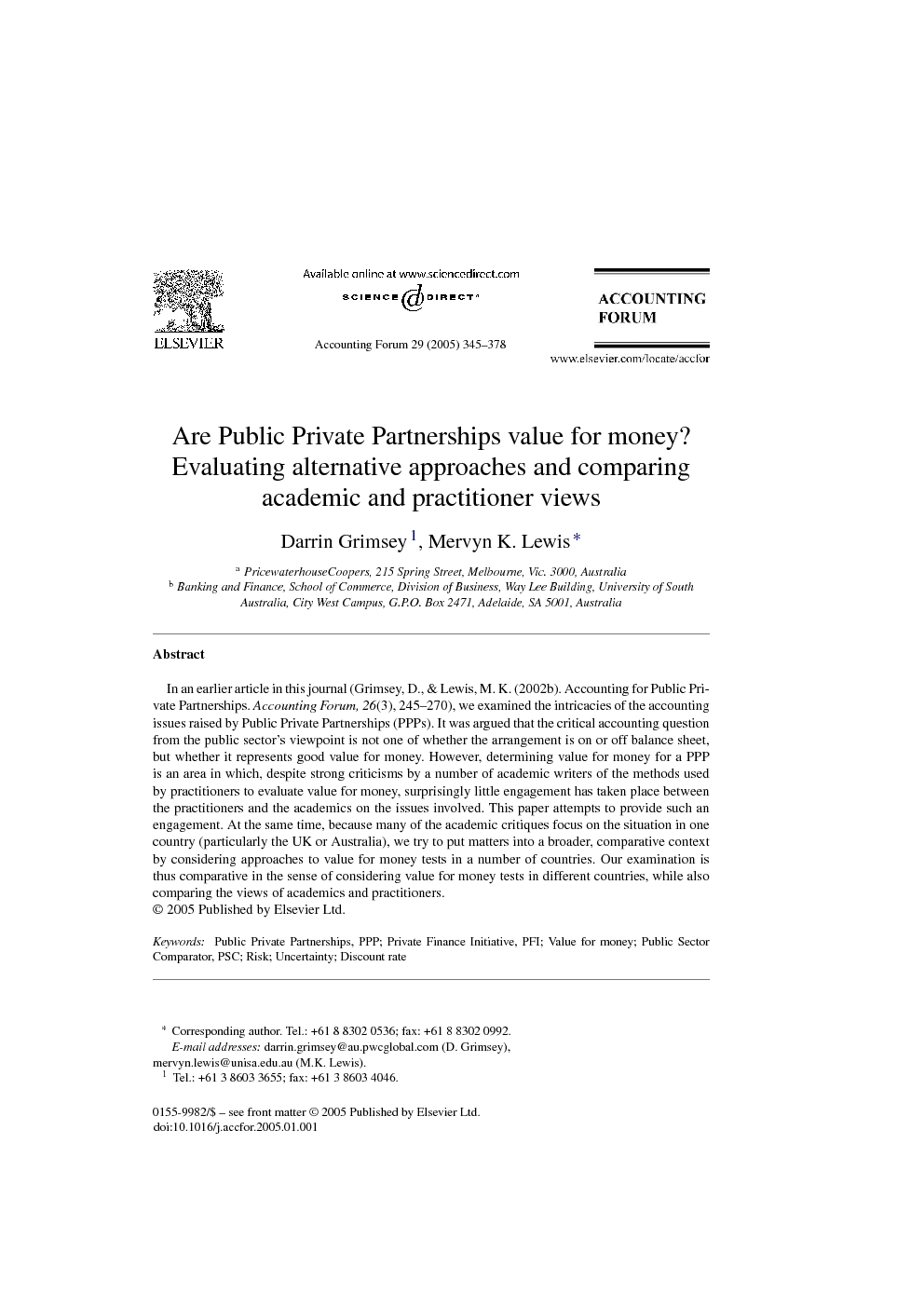 In an earlier article in this journal (Grimsey, D., & Lewis, M. K. (2002b). Accounting for Public Private Partnerships. Accounting Forum, 26(3), 245–270), we examined the intricacies of the accounting issues raised by Public Private Partnerships (PPPs). It was argued that the critical accounting question from the public sector's viewpoint is not one of whether the arrangement is on or off balance sheet, but whether it represents good value for money. However, determining value for money for a PPP is an area in which, despite strong criticisms by a number of academic writers of the methods used by practitioners to evaluate value for money, surprisingly little engagement has taken place between the practitioners and the academics on the issues involved. This paper attempts to provide such an engagement. At the same time, because many of the academic critiques focus on the situation in one country (particularly the UK or Australia), we try to put matters into a broader, comparative context by considering approaches to value for money tests in a number of countries. Our examination is thus comparative in the sense of considering value for money tests in different countries, while also comparing the views of academics and practitioners.

Public Private Partnerships (PPPs) are a refinement of the private financing initiatives for infrastructure that started in the early 1990s and describe the provision of public assets and services through the participation of the government, the private sector and the consumers. There is no single definition of a PPP. Depending on the country concerned, the term can cover a variety of transactions where the private sector is given the right to operate, for an extended period, a service traditionally the responsibility of the public sector alone, ranging from relatively short term management contracts (with little or no capital expenditure), through concession contracts (which may encompass the design and build of substantial capital assets along with the provision of a range of services and the financing of the entire construction and operation), to joint ventures where there is a sharing of ownership between the public and private sectors. Generally speaking, PPPs fill a space between traditionally procured government projects and full privatisation. Although many commentators consider PPPs to be a new version of privatisation (Minow, 2003), in our view PPPs are not privatisation because with privatisation the government no longer has a direct role in ongoing operations, whereas with a PPP the government retains ultimate responsibility.2 Nor do PPPs involve simply the one-off engagement of a private contractor to provide goods or services under a normal commercial arrangement. Instead, the emphasis is on long-term contracts and strict performance regimes, such as build-operate-transfer (BOT) or design-build-finance-operate (DBFO) projects to design, construct, finance, manage and operate infrastructure under a concession, with revenues (either from government or users) according to services supplied. The private sector partner is paid for the delivery of the services to specified levels and must provide all the managerial, financial and technical resources needed to achieve the required standards. Importantly, the private sector must also bear the risks of achieving the service specification. There are various reasons as to why governments might undertake PPPs, although paramount is the objective of achieving improved value for money (VFM), or improved services for the same amount of money, as the public sector would spend to deliver a similar project. There is a long history of publicly procured contracts being delayed and turning out to be more expensive than budgeted. Transferring these risks to the private sector under a PPP structure and having it bear the cost of design and construction over-runs is one way in which a PPP can potentially add value for money in a public project. However, construction risk is not the only aspect of public procurement that needs to be addressed. There are also risks attached to site use, building standards, operations, revenue, financial conditions, service performance, obsolescence and residual asset value, amongst others, to be taken into account when evaluating whether the PPP route to public procurement constitutes good value for money. In fact, based on experience with Private Finance Initiative (PFI)3 projects in the UK, there is an acceptance amongst public service project managers that there are six main determinants of value for money (Arthur Andersen, 2000), namely: risk transfer; the long-term nature of contracts (including whole-of-life cycle costing); the use of an output specification; competition; performance measurement and incentives; private sector management skills. Of these, competition and risk are seen to be the most important. It follows that what would seem to be required to achieve value for money, defined as ‘the optimum combination of whole life cost and quality (or fitness for purpose) to meet the user's requirement’,4 is that • projects be awarded in a competitive environment; • economic appraisal techniques, including proper appreciation of risk, be rigorously applied, and that risk is allocated between the public and private sectors so that the expected value for money is maximized; • comparisons between publicly and privately financed options be fair, realistic and comprehensive. These considerations are normally examined on a case-by-case basis (although one study does focus on the overall rates of return across a large number of PFI projects),5 on the grounds that risk allocation depends on each project's risk profile, while the competitiveness of the market for bids will vary from project to project and from one time to another. However, while competition and risk allocation are the important pre-conditions, with value for money enhanced by transferring an appropriate degree of risk to the private entity, they do not guarantee value for money. Rather, the possibility of achieving extra value for money by implementing a PPP can be estimated (under the approach in the UK and some other countries) with a two-fold analysis conducted prior to the PPP implementation. It comprises, first, the calculation of the benchmark cost of providing the specified service under traditional procurement and, second, a comparison of this benchmark cost with the cost of providing the specified service under a PPP scheme. This benchmark is known as the public sector comparator (PSC).