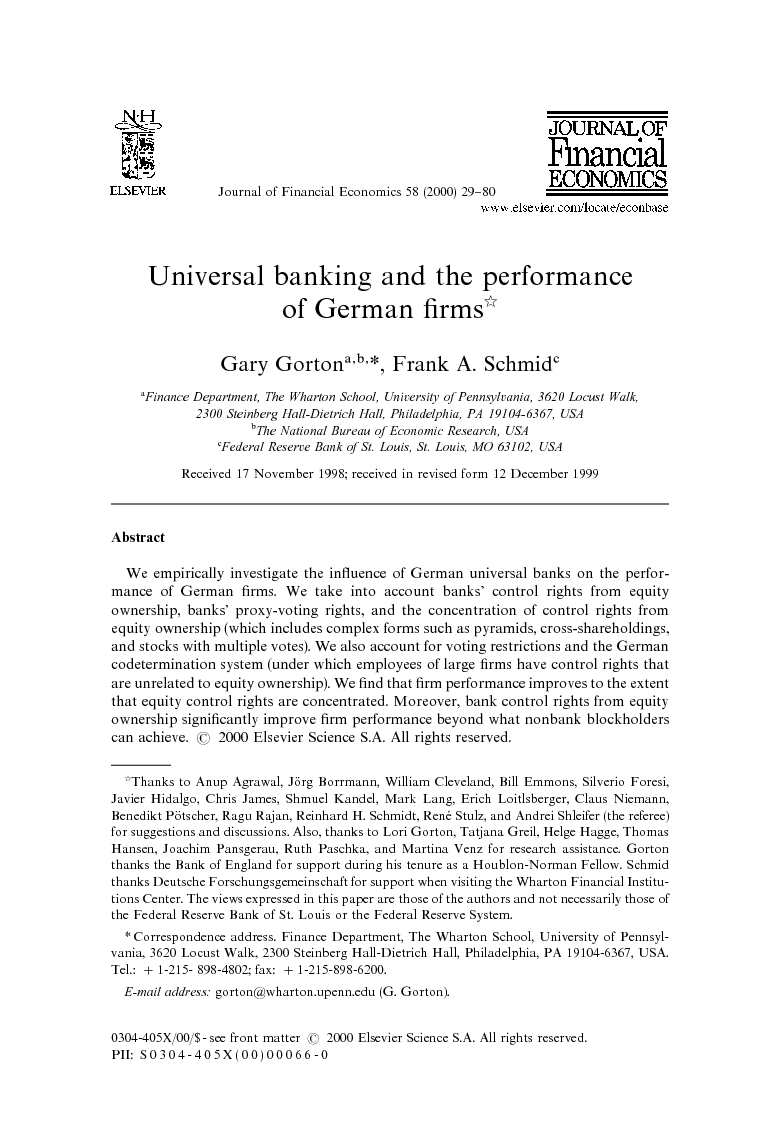 Little is known about corporate governance in economies in which the stock market is not a central institution. In economies with stock markets, the link between control rights and cash-flow rights is more direct and, consequently, can be the basis for takeovers as the ultimate form of governance. Poorly run firms can be taken over by a raider who buys shares in the stock market. Because a share purchase is the purchase of a bundle of cash-flow rights and control rights, the raider will have an incentive and the power to improve the value of the firm. In economies with small or nonexistent stock markets, banks appear to be very important. The concentration of effective, if not formal, power in banks is in contrast to the workings of stock market economies. Our investigation focuses on the extent to which a bank relationship in Germany affects firm performance when the mechanism of takeovers is absent and banks appear powerful. What happens in economies in which the stock market is not so liquid and listings are few? In Germany, several institutional features, aside from the small stock market, suggest that the link between cash-flow rights and control rights is somewhat uncoupled. In particular, with respect to corporate governance, Germany has the following notable features: (i) bank equity ownership, (ii) proxy voting by banks, (iii) high concentration of equity ownership, and (iv) codetermination. We empirically investigate whether these features interact in ways that provide a role for banks to positively affect the performance of firms. When doing that we take into account (i) voting restrictions, (ii) pyramiding, (iii) cross-shareholdings, and (iv) stocks with multiple votes. We find evidence supporting the notion that banks are an important part of the corporate governance mechanism in Germany. Firm performance, measured by the market-to-book value of equity, improves to the extent that banks have control rights from equity ownership. During the periods we investigate, banks do not extract private value to the detriment of firm performance. We find no evidence of conflicts of interest between banks and other shareholders. In particular, we find no evidence that banks use proxy voting to further their own private interests or, indeed, that proxy voting is used at all. It appears, then, that corporate governance mechanisms that are different from those that operate in stock-market-based economies can be effective. Clearly, however, many questions remain to be studied.