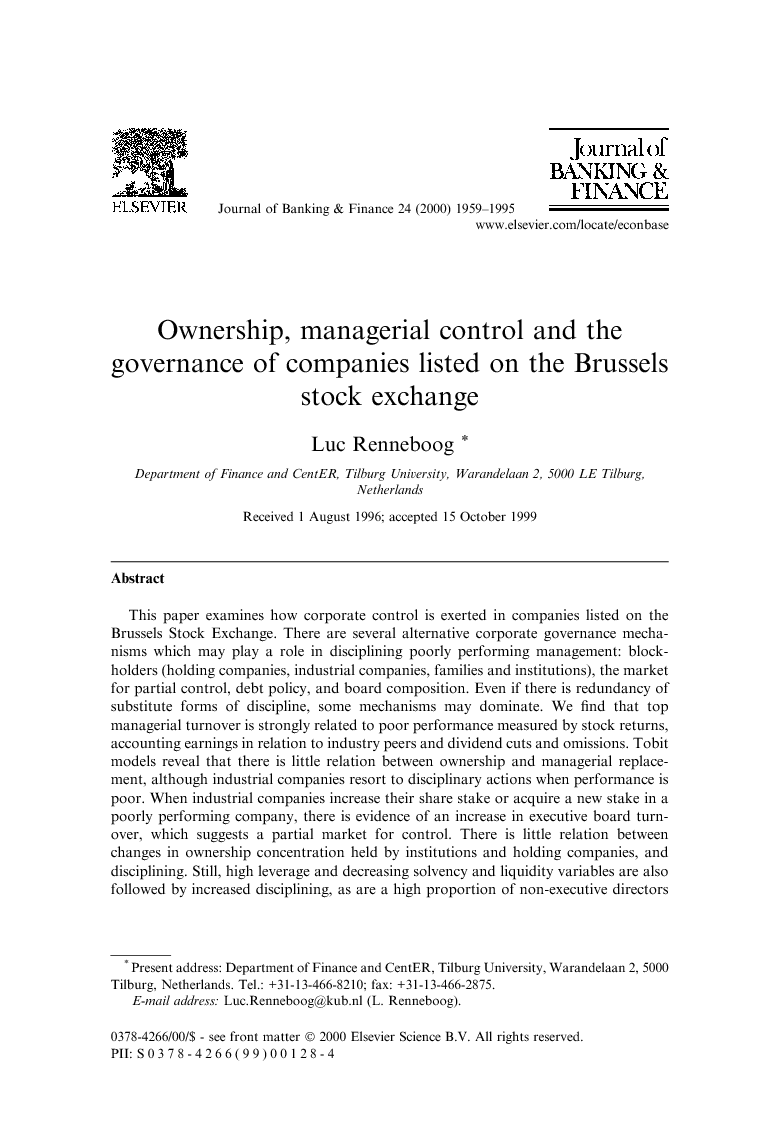 This paper examines how corporate control is exerted in companies listed on the Brussels Stock Exchange. There are several alternative corporate governance mechanisms which may play a role in disciplining poorly performing management: blockholders (holding companies, industrial companies, families and institutions), the market for partial control, debt policy, and board composition. Even if there is redundancy of substitute forms of discipline, some mechanisms may dominate. We find that top managerial turnover is strongly related to poor performance measured by stock returns, accounting earnings in relation to industry peers and dividend cuts and omissions. Tobit models reveal that there is little relation between ownership and managerial replacement, although industrial companies resort to disciplinary actions when performance is poor. When industrial companies increase their share stake or acquire a new stake in a poorly performing company, there is evidence of an increase in executive board turnover, which suggests a partial market for control. There is little relation between changes in ownership concentration held by institutions and holding companies, and disciplining. Still, high leverage and decreasing solvency and liquidity variables are also followed by increased disciplining, as are a high proportion of non-executive directors and the separation of the functions of CEO and chairman.

Whereas in Anglo-American countries, managerial performance is maintained by the complementary intervention of both internal and external control mechanisms (see Shleifer and Vishny, 1997, for an overview), the disciplinary function of the (hostile) take-over market in Belgium, and most other Continental European countries, is limited. Recent Belgian legislative changes with regard to ownership disclosure laws and anti-take-over procedures have further reduced the likelihood of take-overs as a corporate control mechanism. Consequently, as in recent codes of good corporate governance – the Dutch Peeters report (1997), the French Viénot report (1995) and UK Cadbury report (1992) – the Belgian policy recommendations of 1998 by the Stock Exchange Commission, the Association of Employers (VBO) and the Commission for Banking and Finance focus on the effectiveness of internal corporate control mechanisms.1 This paper investigates whether or not poor corporate performance triggers board restructuring and whether disciplinary actions are initiated by internal governance. This paper also examines whether the accumulation of shares into large blocks of shares mitigates the problems of free riding in corporate control, permitting control to be exerted more effectively. The relation between the nature of ownership and incidence of disciplinary turnover when corporate performance is poor is also studied. Besides ownership concentration, capital structure choice may be an instrumental monitoring variable as it can be a bonding device triggering corporate control actions. Such creditor monitoring is expected to be intensified in case of low interest coverage and low liquidity. We also analyse whether a market for share stakes arises. In Continental Europe, such a market might play a role equivalent to the role of external markets in the UK and the US. If a company underperforms, able monitors can increase their voting rights to reach a control level allowing them to nominate a new management team. We find that poor company performance precedes increased board restructuring (turnover of executives, of the management committee and of CEO and executive chairman). This is consistent with findings reported by, among others, Denis and Denis (1995) and Warner et al. (1988) for the US, by Franks and Mayer (1998) and Kaplan (1994) for Germany and by Franks et al. (1998) for the UK. The composition of the board also has an important impact on the internal corporate control system. A high fraction of non-executives on the board and the separation of the functions of CEO and (non-executive) chairman increases the turnover of executive directors of underperforming companies. Weisbach (1988) also reports that outside directors of US firms play a larger role in monitoring management than inside directors. Franks and Mayer (1998) show that, in German companies with concentrated ownership, supervisory board representation goes hand in hand with ownership or large shareholdings. For Japan, Kaplan and Minton (1994) show that board appointments of directors representing banks and corporations are followed by increases in top management turnover. In contrast, Franks et al. (1998) report that non-executive directors seem to support incumbent management in the UK even in the wake of poor performance. Consistent with Shleifer and Vishny (1986) and Grossman and Hart (1980), we find that higher board turnover is positively correlated with strong concentration in ownership which limits free riding on control. Still, this relation is limited to industrial and commercial companies and family shareholders. Considering that the ownership structure is typically complex with stakes held through multiple tiers of ownership, we find that the decision to substitute top management of poorly performing companies is taken by ultimate shareholders (industrial companies and families) who control either directly or indirectly, via affiliated companies, a large percentage of the voting rights. However, neither large institutional investors nor holding companies seem to be involved in active corporate monitoring, which further questions the role and need for ownership cascades involving holding companies. Although, an active market in share stakes exists, it is only weakly related to performance. Specific shareholder classes (industrial and commercial companies) with superior monitoring abilities or with private benefits of control, increase their voting stake to better position themselves to replace management. Such a market for blocks of control also exists in the UK and in Germany, as detailed in Franks et al. (1998) and Franks and Mayer (1998). Shareholders who increase their holdings do so with a clear intention to assume an active monitoring role since management turnover significantly increases in subsequent periods. We also find that high leverage and low interest coverage are related to increased board restructuring which suggests that creditors intervene as the risk of financial distress increases. However, because this interpretation is not corroborated in interviews with monitors; liquidity and solvency-related indicators may act as monitoring triggers for directors or shareholders. Finally, management replacement is followed by modest improvements in growth of dividends per share over a period of two years after turnover. However, board turnover is followed by decreases in earnings. The earnings decline may result from new management's decision to expense large costs while earnings reductions can still be attributed to predecessors, thus lowering the benchmark and allowing for substantial improvements in subsequent years (Murphy and Zimmerman, 1993). The remainder of this paper is organised as follows. Section 2 explains the hypotheses. Section 3 presents the data and methodology. Section 4 provides stylised facts about the ownership structure in Belgian listed companies and Section 5 discusses the main results of the governance models. Finally, Section 6 summarises the findings.

In this paper the importance of several internal and external mechanisms of corporate governance was analysed in terms of disciplining management of poorly performing companies. There may be substitute forms of discipline, and even if there is redundancy, one form may dominate the other consistently. Disciplinary actions against management are taken when market adjusted share returns are negative and when the company generates operating earnings’ losses or resorts to substantial cuts in dividends in the years prior to the restructuring. There is also evidence that companies with levels of and changes in ROE and cash flows below those of industry peers are subjected to increased monitoring. These performance–turnover relations are much stronger for listed industrial and commercial companies than for listed holding companies and financial institutions. Belgian equity markets are characterised by few listings, a high degree of ownership concentration held by holding companies and families, and to a lesser extent industrial companies. Furthermore, control is levered by pyramidal and complex ownership structures and there is an important market for share stakes. Little relation was uncovered between ownership structures and the disciplining of top management in listed industrial and commercial companies. However, the presence of large industrial shareholders (and to a lesser extent of family shareholdings) is related to high executive board turnover when performance is poor, whereas no evidence was found for a monitoring role by institutions or holding companies. A fraction of the market for share stakes may be considered as a corporate control market because industrial and commercial companies increase their shareholdings (or purchase large share blocks) in listed poorly performing industrial companies in which there is, subsequently, increased conflictual management replacement. In the light of disciplining actions undertaken by industrial companies (who are often in the same industry as the target company), the lack of active corporate control in the wake of poor performance by holding companies is striking. High ownership concentration held by a holding company group can lead to strategic deadlocks for quoted companies, as illustrated by the BBL case with the Group Brussels Lambert as reference shareholder. Daems (1998, p. 65) illustrates this deadlock with another example: ‘A reference shareholder [belonging to a holding group] will tend to concentrate on the interests of the group as a whole. He might be tempted to divide its markets over its subsidiaries such that they do not compete too intensively with each other. Hence, [the French holding group] Suez, could have an interest in dividing the international [utility] markets over its subsidiaries, [the French] Lyonnaise des Eaux and [the Belgian] Tractebel. This limitation of strategic freedom of the subsidiaries is not in the interest of minority shareholders and investors who are participating in the group via the stock exchange.’ Although high leverage also seems instrumental to replace poorly performing management, there is no direct evidence that it is bondholders or banks who force underperforming management out. Interviews with non-executive directors disclosed that high leverage or low interest coverage stimulate actions by the (non-executive) board (and as such the shareholders) rather than creditor intervention. We find that the role of the non-executive directors is important in the disciplining process: a high proportion of non-executive directors leads to increased executive board turnover. Given that companies usually do not reveal the representation of the shareholders of the board of the directors, the percentage of non-executive directors was used as a proxy for independence of the board from management, but the board structure may very well be influenced by ownership concentration. Furthermore, a higher probability of CEO replacement was found when the tasks of CEO (‘delegated’ director) and (non-executive) chairman are separated. Corporate governance relations in holding companies and especially financial institutions are much weaker than in listed industrial companies. Board composition and leverage have a substantial impact on board restructuring, but neither ownership concentration nor a partial market for share stakes leads to increased disciplining in holding companies. Belgian listed holding companies may to a large extent suffer from a lack of corporate control and seem to have discharged themselves from efficient monitoring of the companies they control, as seems also be the case for French holding companies (Banerjee et al., 1997). In spite of the presence of a large shareholder in a vast majority of Belgian listed companies and of the breakdown – both in terms of performance and governance – of the ownership cascade system involving holding companies, it is problematic that the recent codes for good corporate governance do not encompass any recommendation with regard to large shareholder monitoring.35