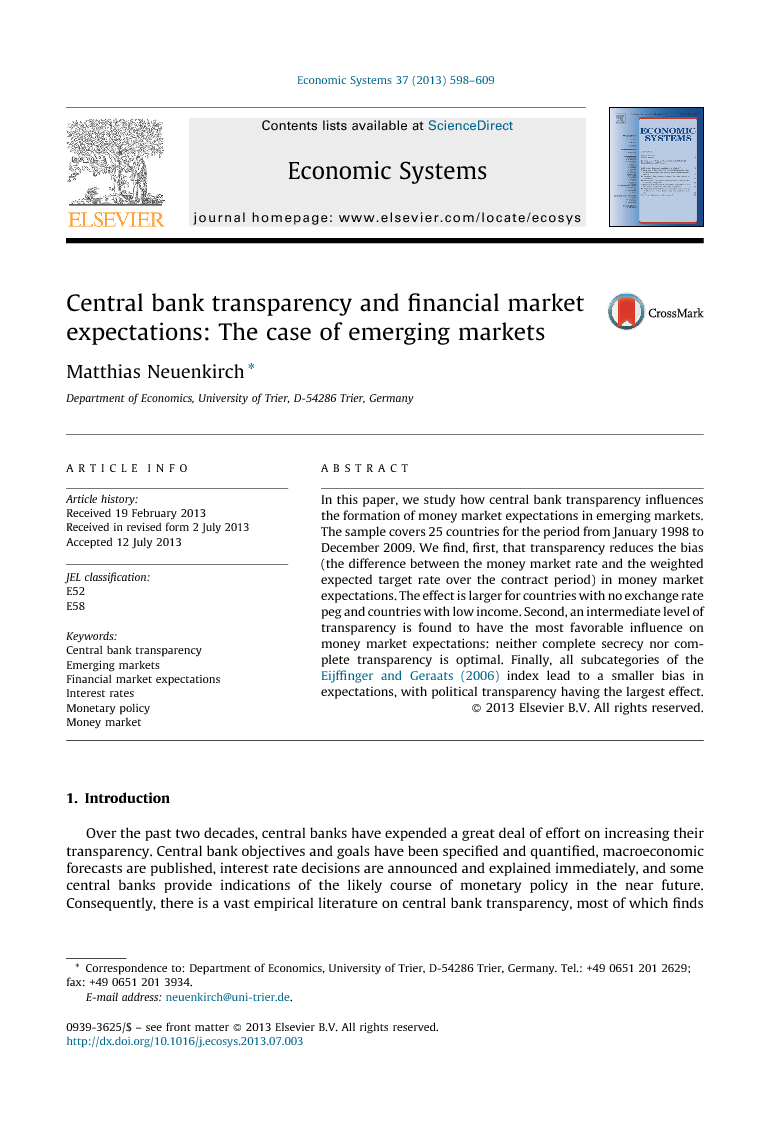 Over the past two decades, central banks have expended a great deal of effort on increasing their transparency. Central bank objectives and goals have been specified and quantified, macroeconomic forecasts are published, interest rate decisions are announced and explained immediately, and some central banks provide indications of the likely course of monetary policy in the near future. Consequently, there is a vast empirical literature on central bank transparency, most of which finds beneficial effects of such transparency. For example, van der Cruijsen and Eijffinger (2010) review the literature and conclude that transparency (i) improves consensus across forecasters, (ii) lowers inflation and anchors inflation expectations, (iii) improves the credibility, reputation, and flexibility of central banks, (iv) has no obvious influence on output and output variability, and (v) improves policy anticipation.1 Most of this literature focuses on mature economies, but central banks in emerging markets have also been hard at work increasing their transparency. Fig. 1 shows the minimum, median, and maximum transparency index for the 25 emerging markets in our sample2 versus nine often studied advanced economies.3 Transparency is higher in advanced economies, but there is a noticeable trend of increasing transparency in emerging markets during the first half of the sample period (1998–2003). However, in the second half of the sample period (2004–2009), there is no change in minimum, median, and maximum transparency of the emerging markets. Siklos (2011) concludes that it is unclear whether this break reflects limits to central bank transparency or, to some extent, transparency “fatigue.” Regardless of the reason for it, in the empirical analysis below, we explicitly control for this break. Full-size image (21 K) Fig. 1. Transparency index for 25 emerging markets and nine advanced economies. Figure options Despite these developments in the late 1990s and early 2000s, empirical evidence about the influence of central bank transparency on emerging markets is scant. Fatas et al. (2007) analyze the effects of a formal quantitative monetary policy target (exchange rate target, money growth target, inflation target) in 42 advanced and emerging countries over the period 1960–2000. They find that a de jure target tends to lower inflation and smooth business cycles and that hitting the target de facto increases the positive effects. Chortareas et al. (2002a) construct a transparency index based on forecasts from 87 central banks worldwide covering the period 1995–1999. These authors find that greater transparency in forecasts is associated with lower inflation for countries with an inflation target or a monetary target, but not for countries with an exchange rate anchor. Output variability is unaffected. In addition, Chortareas et al. (2002b) examine the influence of transparency in forecasting and decision-making on the costs of disinflation. The sacrifice ratio is negatively related to transparency in forecasting but not to transparency in the decision-making process. Dincer and Eichengreen (2009) construct a broader index of transparency for 100 central banks and document a significant movement toward higher transparency during their sample period (1998–2006). Using transparency as an explanatory variable, they find that higher transparency is associated with less inflation variability. However, inflation persistence is not significantly affected by this trend. van der Cruijsen et al. (2010) employ an index based on the same questionnaire but arrive at a different conclusion. They discover that transparency significantly reduces inflation persistence, but also detect an optimal intermediate degree of transparency (between 5.5 and 7.5) at which inflation persistence is minimized. Thus, central banks might not necessarily benefit from further increasing transparency. Middeldorp (2011) examines 24 emerging and advanced economies using the Dincer and Eichengreen (2009) dataset. He finds that transparency increases the accuracy and reduces the volatility of professional interest rate forecasts. To date, the literature provides no emerging-market-specific conclusions and tends to focus on transparency's impact on inflation and output (for an exception, see Middeldorp, 2011). However, to conduct sound monetary policy, it is particularly important to know whether or not central bank actions are being correctly anticipated by financial markets.4 In this context, Neuenkirch (2012) concludes—for nine mature economies—that a higher degree of central bank transparency improves the expectation formation process. Transparency reduces the expectation bias in the money market (namely, the difference between the money market rate and the weighted expected target rate over the contract period) and dampens variation in expectations. Coppel and Connolly (2003) find that the extent to which market participants anticipate changes in the policy rate has gradually increased since the late 1980s, as has the speed of reaction to interest rate announcements. Andersson and Hoffmann (2009) find evidence that the three central banks in their sample (the Reserve Bank of New Zealand, the Norges Bank, and the Riksbank) have been highly predictable in their monetary policy decisions, regardless of whether forward guidance involved the publication of an own interest rate path.5 This paper fills the gap in the literature pertaining to emerging markets and examines the impact of transparency on the course of short-term interest rates. Our survey covers 25 emerging market countries for the period January 1998–December 2009. Econometrically, we employ an unbalanced panel least squares model to assess the following research questions. First, does transparency decrease the expectation bias in money markets? If so, is the bias-reducing influence linear or non-linear? Second, are there subcategories of transparency (political, economic, procedural, policy, operational) that are particularly important for the formation of expectations? We employ a variant of the bias indicator put forward in Neuenkirch (2012) and examine the influence of transparency as measured by Eijffinger and Geraats's (2006) broad index 6 (and its subcomponents) on the course of short-term interest rates. The remainder of this paper is organized as follows. Section 2 introduces the dataset and explains our econometric methodology. Section 3 presents the results for the influence of transparency on the central bank's ability to manage financial market expectations. Section 4 concludes.

In this paper, we study how central bank transparency influences the formation of money market expectations. Our survey covers 25 emerging market countries for the period January 1998–December 2009. As the dependent variable, we employ a variant of the bias indicator put forward in Neuenkirch (2012), which captures the deviation of money market rates from the expected target rate. Our findings are as follows. First, transparency mitigates the bias in money market expectations. The effect is larger for countries with no exchange rate peg and countries with relatively low income. However, an intermediate level of transparency has the most favorable influence on money market expectations: neither complete secrecy nor complete transparency is optimal. Second, a detailed examination of the subcategories of the Eijffinger and Geraats (2006) index reveals that all subcategories reduce bias in expectations, with political transparency having the largest effect. Of the individual question items, an explicit contract or a similar institutional arrangement between the monetary authorities and the government (Q1c) stands out, as do two subcategories of operational transparency (Q5a and Q5b) and the prompt disclosure of interest rate decisions (Q4b). Our results have important implications for policymakers. First, an increase in political transparency (see Fig. 3) paid off during the sample period. This category has the largest bias-reducing influence across all subcategories and therefore it might be beneficial for the remaining 12 central banks—that is, the ones not achieving the maximum score in this subcategory—to increase this particular aspect of transparency. There is even more room for improvement when it comes to the other subcategories of the transparency index as, in the case of operational transparency, only four (Q5a) and one (Q5b) of the central banks receive the maximum score. Second, since the prompt explanation of policy decisions, that is, formal central bank statements, also results in a strong bias-reducing impact, the use of informal communication could be another useful tool for steering money market expectations (for evidence in the context of nine advanced economies, see Neuenkirch, 2012). Finally, however, when deciding on improvements in transparency, central banks should take into account that too much transparency can be harmful. Agents can become confused by the conditionality of central bank publications or simply suffer from an overload of information.