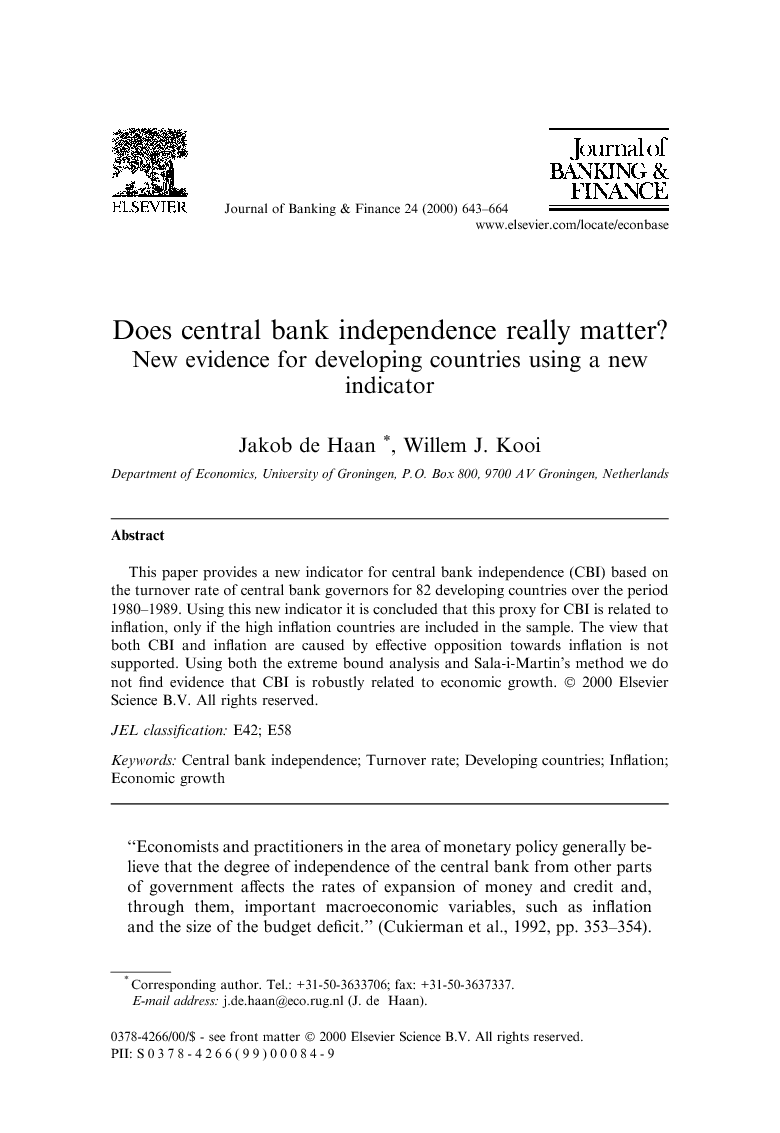 This paper provides a new indicator for central bank independence (CBI) based on the turnover rate of central bank governors for 82 developing countries over the period 1980–1989. Using this new indicator it is concluded that this proxy for CBI is related to inflation, only if the high inflation countries are included in the sample. The view that both CBI and inflation are caused by effective opposition towards inflation is not supported. Using both the extreme bound analysis and Sala-i-Martin's method we do not find evidence that CBI is robustly related to economic growth.

As follows from the citation above, nowadays is it widely believed that regulation resulting in a high level of central bank independence (CBI) coupled with some explicit mandate for the bank to restrain inflation are important institutional devices to assure price stability. An independent central bank can give full priority to low levels of inflation, whereas in countries with a more dependent central bank other considerations (notably, re-election perspectives of politicians and a low level of unemployment) may interfere with the objective of price stability. Indeed, there is quite some evidence for a negative relationship between central bank independence and inflation (see Eijffinger and De Haan (1996) for a review). This evidence generally consists of cross-country regressions using proxies for CBI based on the statutes of the central bank (e.g., Eijffinger and Van Keulen, 1995). Popular as the view referred to above may be, the empirical literature on the effects of central bank independence recently came under attack. First, the relevance of independence measures which are based on regulations on the position of the central bank is disputed if it comes to testing whether central bank independence is conducive to lower inflation. For instance, Forder (1996, pp. 43–44) argues that “a central bank may be independent by statute, and it is nevertheless accepted – on all sides – that the government will have its wishes implemented. ... it is quite clear that the reading of statutes is not a measure of independence in the sense required by the theory ... There is no theory that says it matters what the rules say. There is only a theory that says it matters what the behaviour is”. Of course, one could conjecture that regulations concerning the position of the central bank may (at least partially) shape the options for the central bank to pursue the kind of policies that it deems necessary. Still, existing indices of central bank independence are often incomplete and noisy indicators of actual independence. For example, laws cannot specify explicitly the limits of authority between central banks and the political authorities under all contingencies. And even when the laws are quite explicit, actual practice may deviate from them Cukierman et al., 1992 and Walsh, 1997. However, this does not mean that legal indicators are uninformative. But, as Cukierman (1995) points out, it does imply that their use should be supplemented by judgement in the light of the problem under consideration. In particular some indices are more appropriate for some purposes than for others. For instance, legal independence measures may be a better proxy for actual independence in industrial countries than in developing countries. Cukierman (1992) and Cukierman et al. (1992) therefore developed a yardstick for central bank autonomy which is not based on regulation but on the actual average term of office of central bank governors in different countries during the period 1950–1989. This indicator is based on the presumption that, at least above some threshold, a higher turnover of central bank governors indicates a lower level of independence. So far, a number of studies have used this indicator for CBI and conclude that there is compelling evidence that CBI matters, as there is a clear relationship between the turnover rate of central bank governors (TOR) and the inflation performance. Cukierman et al. (1993) even report that their TOR is significantly related to economic growth. Second, it should be noted that a significant correlation does not necessarily imply causation. The correlation between both variables could be explained by a third factor, e.g. the culture and tradition of monetary stability in a country. Indeed, Posen, 1993 and Posen, 1995 challenges the conventional view on this grounds arguing that the strength of the opposition of the financial sector against inflation both determines the degree of central bank independence and the level of inflation. According to Posen monetary policy is driven by a coalition of political interests in society, because a central bank will be prepared to take a strong anti-inflation line only when there is a coalition of interests politically capable to sustain such a policy stance. In industrial countries, the financial sector represents such a coalition. De Haan and Van 't Hag (1995) criticize Posen's empirical results for OECD countries. Posen's view is only confirmed if Cukierman's legal indicator is used. There is less support if alternative legal indicators for CBI are employed. This paper extends the existing literature in a number of ways. First, based on information provided by the IMF and national central banks we develop a new indicator for central bank independence based on the turnover rate of central bank governors for 82 developing countries over the period 1980–1989. Second, we analyse the robustness of previous findings with respect to the relationship between CBI and inflation by using this new indicator. Third, we examine the relationship between various macroeconomic variables and our proxy for CBI. The remainder of the paper is organized as follows. Section 2 briefly reviews the literature. Section 3 presents our new indicator and compares it with that of Cukierman et al. (1992). 4 and 5 show how well this indicator is related to various macroeconomic variables (inflation, output growth), thereby providing new insights with respect to the robustness of the conclusions of previous research. The final section offers some concluding comments.

This paper extends the literature on the consequences of central bank independence in a number of ways. Based on information provided by the IMF and national central banks we develop a new indicator for central bank independence (CBI) based on the turnover rate of central bank governors for 82 developing countries over the period 1980–1989. Using this indicator we analyse the robustness of previous findings on the relationship between CBI and macroeconomic variables like inflation and economic growth. We conclude that their is a significant relationship between CBI and inflation (variability). However, this conclusion only holds if the high inflation countries are included in the sample. Following the sensitivity analysis of Levine and Renelt (1992) and of Sala-i-Martin (1997) we conclude that there is no (directly nor indirectly) robust relationship between our indicator for CBI and economic growth. This finding is in contrast to the conclusion of Cukierman et al. (1993).