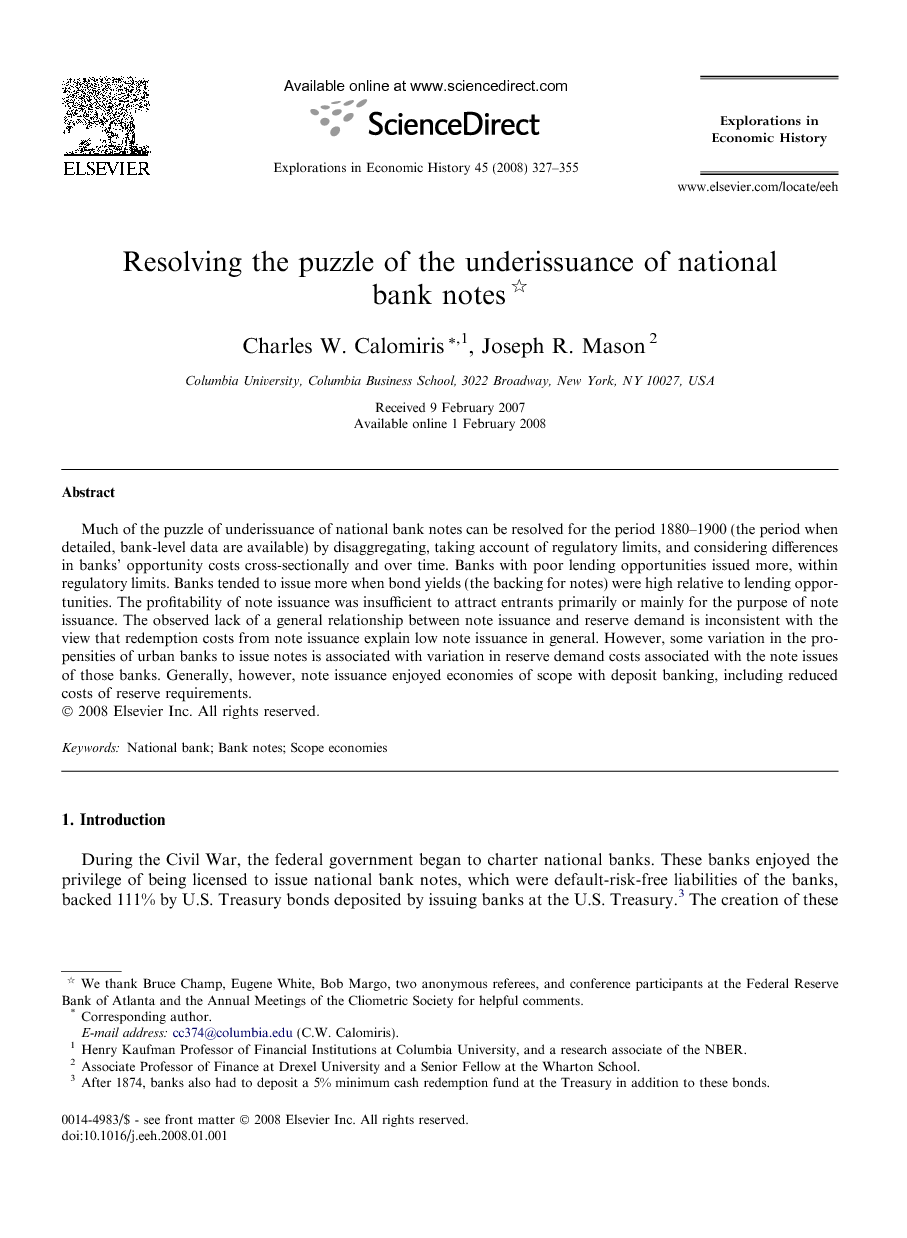 Much of the puzzle of underissuance of national bank notes can be resolved for the period 1880–1900 (the period when detailed, bank-level data are available) by disaggregating, taking account of regulatory limits, and considering differences in banks’ opportunity costs cross-sectionally and over time. Banks with poor lending opportunities issued more, within regulatory limits. Banks tended to issue more when bond yields (the backing for notes) were high relative to lending opportunities. The profitability of note issuance was insufficient to attract entrants primarily or mainly for the purpose of note issuance. The observed lack of a general relationship between note issuance and reserve demand is inconsistent with the view that redemption costs from note issuance explain low note issuance in general. However, some variation in the propensities of urban banks to issue notes is associated with variation in reserve demand costs associated with the note issues of those banks. Generally, however, note issuance enjoyed economies of scope with deposit banking, including reduced costs of reserve requirements.

For the period 1880–1900, we are able to explain much of the note issuing patterns of national bank notes when we disaggregate the data to the level of individual banks, take account of the limits banks faced on their maximum permissible note issues, and consider differences in opportunity costs of note issuing across banks. In 1880, 40% of national banks, in 1890, 5% of national banks, and in 1900, 21% of national banks were max- imum note issuers. Banks with low lending opportunities maximized their ability to issue notes but could not issue more than a certain amount. Other banks, with high lending opportunities, chose not to issue more notes. Years in which bond yields (the required backing for notes) were higher saw greater propensities to issue notes, holding constant lending opportunities. Models of redemption costs associated with issuing national bank notes (per se) do not explain the substan- tial cross-sectional variation in the extent to which national banks chose to issue national bank notes. The theory that redemption cost explains underissuance of notes is inconsistent with the observed lack of a general relationship between bank note issuance and excess reserve holdings. At the same time, the redemption cost explanation may have relevance for the issuance behavior of urban banks. For urban banks, low residual note issuance in some years (estimated in Section 3 ) is associated with higher reserve needs related to issuing national bank notes in some of those years, at least for one definition of reserves (NER). An examination of reserve demand indicates substantial economies of scope between note issuing, on the one hand, and deposit taking and lending, on the other hand. Those economies of scope probably included shared overhead costs as well as the ability to economize on the costs of maintaining mandatory minimum levels of reserves and capital when issuing notes. Combining deposit taking and note issuing allowed banks to make full use of capital and reserves that were legally required in support of note issuing but which exceeded warranted levels. National banks did not enter mainly to issue national bank notes. Indeed, over the period 1880–1900, new entrants focused less on note issuing, while banks exiting were more likely to be maximum issuers. Nor did banks raise new equity capital mainly to finance additional note issuance. Note issuing was profitable only for some banks, and only when combined with lending and deposit taking. Note issuing seems to have been a relatively unprofitable line of business for relatively successful bankers. During our period, understanding the low issuance of national bank notes is substantially improved by disaggregating data and thus avoiding misleading ‘‘representative bank ” analysis relating average bank behavior and average bank opportunities. Unfortunately, data limitations prevent us from applying this same approach to the period after 1900, when the apparent profitability of bank note issuance was especially high