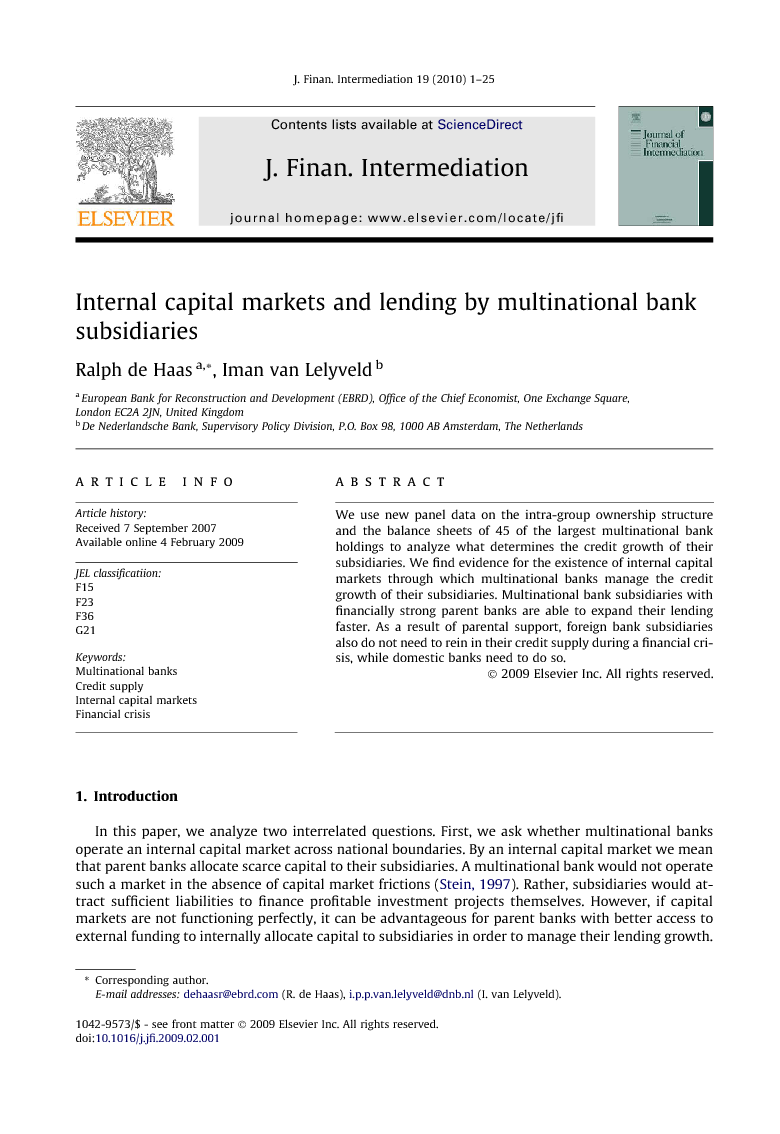 We examine whether multinational banks operate an internal capital market and, if so, whether the presence of financially integrated banks exposes countries to foreign economic developments. We analyze how multinational bank lending is influenced by the macroeconomic situation in the host country and in the home country, and by the financial characteristics of the subsidiary itself, those of the parent bank, and those of other subsidiaries. This is the first paper to analyze these micro and macro determinants of multinational bank lending within an integrated empirical framework. Our findings indicate that multinational banks manage the credit growth of their subsidiaries. In particular, we find strong proof of support effects. Subsidiaries of strong parent banks—that have high net interest margins or low loan loss provisioning to net interest revenue—grow faster. Subsidiaries of parent banks that keep less liquid assets on their balance sheets are able to grow faster as well. If other subsidiaries in the same banking group are relatively profitable this also positively influences subsidi- ary lending. Finally, we find that during systemic banking crises, multinational bank subsidiaries keep lending, whereas domestic banks are forced to sharply restrict their credit supply. Robustness tests add further credibility to the claim that our findings do not reflect macroeconomic linkages but in- tra-bank capital management. As Houston et al. (1997) did for national bank holdings in the US, we provide evidence for the operation of internal capital markets at the international level. We find weaker empirical support for substitution effects. We show that, in line with substitution effects, multinational bank subsidiaries expand lending faster when economic growth in their home country decreases. Likewise, we find that high host country growth stimulates credit growth, although this effect is limited to greenfield and remote subsidiaries. However, our robustness tests show that domestic bank lending is also procyclical (though somewhat less so) and also negatively related to economic growth in the home countries of foreign competitor banks. So while our findings are in line with substitution effects, they may also partly reflect macroeconomic linkages between countries. Our findings imply that openness to multinational bank subsidiaries can benefit host countries. Since the pace of multinational bank lending is partly determined abroad, the aggregate credit supply in the host country becomes more stable and less strongly correlated with the local business cycle. We find that multinational banks provide a stabilizing factor during local financial turmoil in particular. Diversity in bank ownership therefore contributes to credit stability, allowing firms with binding cred- it constraints to optimize investments and households to better smooth consumption over time. An important caveat is that the above interpretation of our results presumes that parent banks operate an internal capital market because they are better able to attract liquidity and raise capital than individual subsidiaries. If parent banks themselves experience problems with raising funds, they may no longer be able to support subsidiaries. Lending by foreign subsidiaries may even be scaled back in order to free up capital for the parent bank, leading to contagion from home to host countries. Indeed, the global financial crisis is currently testing the resilience of the support effects docu- mented in this paper. Multinational banks have so far continued to support their foreign subsidiaries. For instance, in Kazakhstan, cross-border foreign bank credit to domestic banks has dried up and the latter consequently had to rein in their own lending. Multinational bank subsidiaries were much less affected. ATF Bank, a mid-sized Kazakh bank owned by the Italian UniCredit group, for instance ob- tained credit lines and capital injections from its parent bank. In Latvia, multinational bank subsidiar- ies continued to receive funding from their parent banks, while Parex Bank, the second-largest bank and the only domestic bank left in the country, suffered a run on its deposits, forcing the government to step in. Both examples illustrate that lending by multinational bank subsidiaries tends to be more stable than cross-border foreign bank lending (see also Peek and Rosengren, 2000a ). For countries that plan to open up their banking system, it may thus make sense to not only permit cross-border foreign bank lending, but to also allow committed multinational banks to establish or buy local subsidiaries. When doing so, countries should ideally encourage entry from a variety ofhome countries. Diversified multinational bank ownership is preferred to highly concentrated foreign ownership as the latter implies an overreliance on intra-bank support from one or a very small num- ber of foreign parent banks.