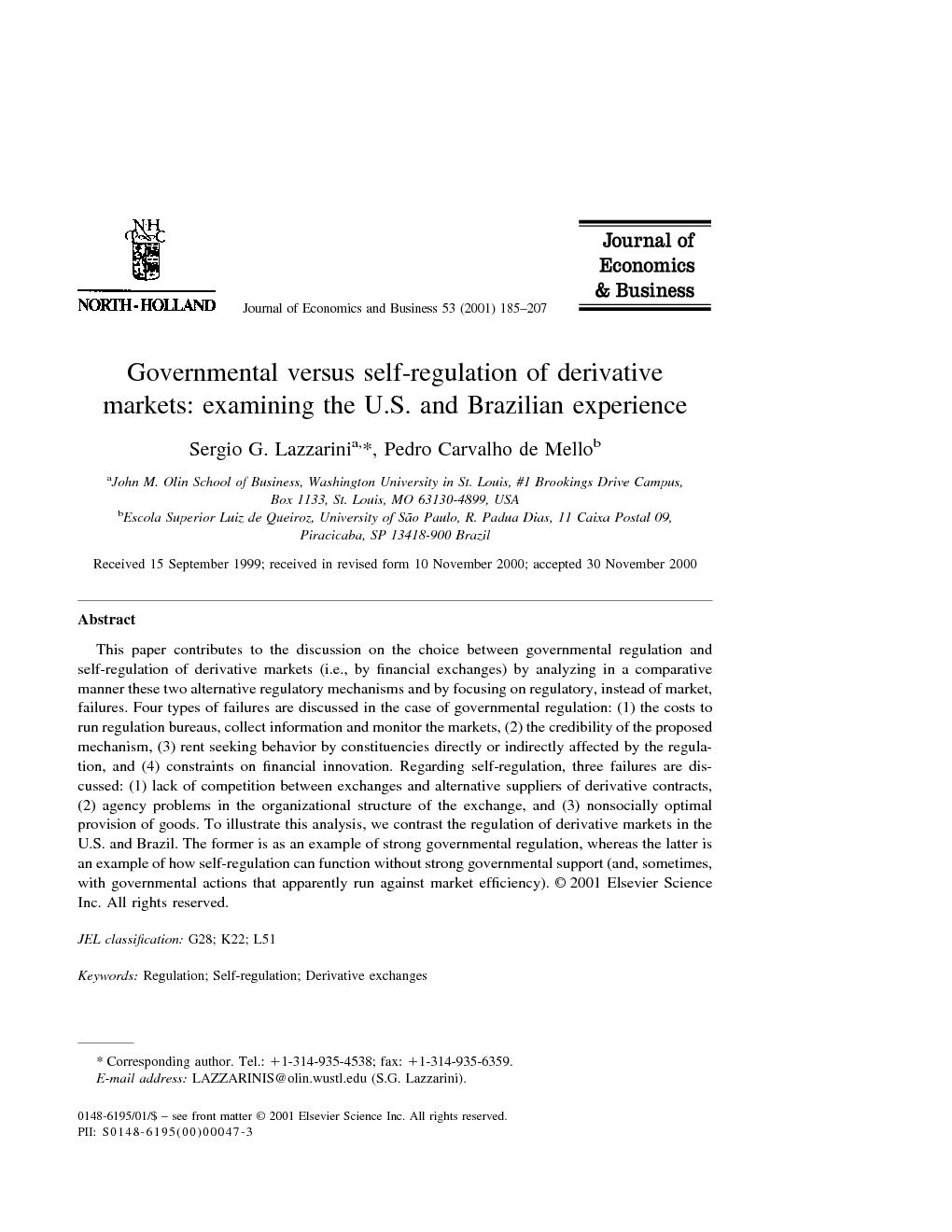 This paper contributes to the discussion on the choice between governmental regulation and self-regulation of derivative markets (i.e., by financial exchanges) by analyzing in a comparative manner these two alternative regulatory mechanisms and by focusing on regulatory, instead of market, failures. Four types of failures are discussed in the case of governmental regulation: (1) the costs to run regulation bureaus, collect information and monitor the markets, (2) the credibility of the proposed mechanism, (3) rent seeking behavior by constituencies directly or indirectly affected by the regulation, and (4) constraints on financial innovation. Regarding self-regulation, three failures are discussed: (1) lack of competition between exchanges and alternative suppliers of derivative contracts, (2) agency problems in the organizational structure of the exchange, and (3) nonsocially optimal provision of goods. To illustrate this analysis, we contrast the regulation of derivative markets in the U.S. and Brazil. The former is as an example of strong governmental regulation, whereas the latter is an example of how self-regulation can function without strong governmental support (and, sometimes, with governmental actions that apparently run against market efficiency).

What is the optimal balance between governmental regulation and self-regulation of derivative markets (i.e., by financial exchanges)? This has long been subject to an intense debate, being recently revisited due to several cases of bankruptcies involving derivative negotiation (e.g., Miller 1996, Romano 1996 and Pirrong 1997), popularly attributed to the lack of enough governmental regulation. The debate, however, has provided only limited answers to that question for two reasons. First, governmental regulation and self-regulation are rarely observed in a comparative manner, i.e., by evaluating the competencies and flaws of both mechanisms simultaneously. Proponents of governmental deregulation focus on the costs associated with government action, thus neglecting failures of self-regulation, while defendants of tight regulatory regimes tend to dismiss the costs of government regulation. Second, the justification for intervention has relied heavily on the existence of market failures, usually disregarding the feasibility of the proposed change (e.g., more governmental or self-regulation). The existence of market failures does not imply necessarily that a remedy can be successfully proposed and implemented. 1 This paper contributes to this discussion by assessing the choice between governmental regulation and self-regulation in a comparative manner and by considering feasible solutions. To support our analysis, we contrast the regulation of derivative markets in the U.S. and Brazil. The former is as an example of strong governmental regulation, whereas the latter is an example of how self-regulation can function without strong governmental support (and, sometimes, with governmental actions that apparently run against market efficiency).2 Despite its status as a developing country, Brazil has a large derivative market: its main financial exchange, The Commodity and Futures Exchange (BM&F), ranks among the top ten derivative exchanges in the world according to the number of contracts traded. Given that the U.S. case has been extensively discussed in the literature (e.g., Gemmil 1983, Fischel 1986, Pashigian 1986, Edwards and Ma 1992, Pirrong 1995, Romano 1996 and Romano 1997), we only provide some general comments about it, and leave a detailed analysis for the Brazilian case. We owe our main theoretical underpinning to Ronald Coase. First, because he stressed that the analysis of economic organization (regulation being one specific mechanism) should be essentially comparative. In particular, even though the word “regulation” is usually understood as some form of governmental intervention, this is only one alternative way to regulate a market or industry: less understood is how organizations—in our case, financial exchanges—accomplish this task. Within this perspective, Coase (1988) wrote: All exchanges regulate in great deal the activities of those who trade in these markets (the times at which transactions can be made, what can be traded, the responsibilities of parties, the terms of settlement, etc.), and they provide machinery for the settlement of disputes and impose sanctions against those who infringe the rules of exchange. It is not without significance that these exchanges, often used by economists as examples of a perfect market and perfect competition, are markets in which transactions are highly regulated (and this quite apart from any governmental regulation that there may be) (Coase, 1988, p. 9). Thus, although exchanges are usually treated as an example of an “ideal’ market, they represent instead a rich example of an organizational effort to reduce costs in market transactions (Telser & Higinbotham, 1977). This invites a comparative analysis of two mechanisms to promote regulation: governmental action and the effort of exchanges to orchestrate their markets, i.e., self-regulation. The recognition of market failures is not enough, because it leaves unspecified which of these two mechanisms have better competencies to deal with these failures. To tackle this issue, we focus instead on the regulatory failures Coase 1964 and Dempsey 1989 of both governmental and self-regulation, i.e., how the operation of these mechanisms per se creates inefficiencies. Our second contribution draws from Coase’s insistence that market failures do not necessarily justify market intervention. As he observed, … all solutions have costs and there is no reason to suppose that government regulation is called for simply because the problem is not well handled by the market or the firm (Coase, 1960, p. 18). (In our case, the “firm” is represented by exchanges and their self-regulatory devices.) Therefore, the objective to reduce certain market failures may be simply economically unfeasible and operationally irrelevant (Williamson, 1996), i.e., remedies may not be implementable with net gains. Again, the observance of market failures is not enough: it is important to discuss what is the least costly mechanism to mitigate market failures (as discussed before) and if the proposed change (more regulation or self-regulation) can be feasibly implemented. 3 This orientation, in particular, forces us to consider the details of the institutional environment 4 of a country (for instance, how politics can influence the credibility of governmental regulation), avoiding “one-size-fits-all” recommendations. The paper is organized as follows. We begin by reviewing, in a comparative manner, the literature assessing failures of governmental and self-regulation. The U.S. experience is then discussed as an example of a derivative market supported by strong governmental regulation. The Brazilian experience, in contrast, provides elements to evaluate how self-regulation can function without strong governmental support. We conclude by pointing out lessons that can be taken from these cases, in particular with respect to our main question: what is the optimal balance, if any, between governmental regulation and self-regulation in derivative markets?

Certainly, the evidence presented in this paper does not allow us to test the relevance of regulatory failures and their impact on the performance of derivative markets. However, some lessons can be learned and, possibly, motivate further theoretical and empirical research. We present below some general implications of our discussion. 1. A priori, there is no optimal balance between governmental regulation and self-regulation. It strongly depends on the particular conditions of each country, especially the institutional environment. Countries in which regulatory agencies are not insulated from governmental discretion can induce noncredible and counterproductive regulation. The Brazilian case demonstrates that governmental intervention in the derivative markets has attempted to support particular economic policies rather than reduce market failures. An increase in the power of governmental regulatory agencies would simply create a noncredible and costly regulation that could, as a result, reduce trader willingness to enter the market. Thus, the Brazilian case does not mean that self-regulation is enough: it means instead that it might be the only feasible solution given enforcement failures of the institutional environment as a whole. Furthermore, the establishment of public regulatory agencies in countries with problems of corruption and inefficient public management can exacerbate rent seeking. This point is important because derivative negotiation has emerged in many countries 19 and the regulatory experience of other countries such as the U.S. may be used as an example—but with unexpected consequences. The careful observation of institutional conditions serves us to avoid “one-size-fits-all” recommendations. 2. A given regulatory framework tends to perpetuate over time. Using Krueger’s (1990) words, regulatory agencies have lives of their own. This simply means that certain proposals to increase or decrease regulation may be simply operationally irrelevant: coalitions profiting from the regulatory framework will attempt to oppose the proposed change—the U.S. case being a vivid illustration. Thus, even if there are significant benefits to change the regulatory status of a country (e.g., reduce the scope of public agencies to avoid excessive costs), the rent dissipated by political groups in order to support the existing regime may outweigh those benefits. 3. Considerations about failures of self-regulation invite an analysis about how the governance of exchanges can be improved, and how competition between suppliers of derivative contracts can be enhanced. In a normative sense, this also suggests that governmental regulation, whenever feasible, can be a complementary mechanism attempting to reduce failures of self-regulation Houthakker 1982, Pirrong 1995 and Pirrong 1998, rather than market failures. For example, the government can encourage competition between exchanges or other suppliers of derivative products, and facilitate entry by international exchanges. The government can also create rules to mitigate agency problems within exchanges, which may be substantial even if exchanges face competition (Pirrong, 1995).20 The converse is also true: self-regulation can act as a device to detect and generate pressure to avoid counterproductive government rules. Further studies are needed to evaluate this possible complementarity between governmental and self-regulation.21 There are, certainly, many unanswered questions. How can problems of self-regulation, with respect to possible conflicts of interest between members and their exchange be mitigated? If one adopts a perspective that governmental regulation (if feasible) can complement self-regulation, should governments attempt to increase competition between exchanges, reduce agency problems, or both? On the other hand, is it possible to insulate public agencies from discretionary intervention and increase the efficiency (and feasibility) of governmental regulation? How can increased cross-country derivative negotiation (which has to deal with distinct institutional environments) be coped with, in particular with the emergence of alliances between international exchanges (e.g., Domowitz, 1995)? We note that all these questions require essentially a comparative perspective based on the relative competencies and shortcomings of feasible regulatory mechanisms. Surely, this approach can provide more useful theorizing and empirical investigation than criticisms towards one or other mechanism alone.