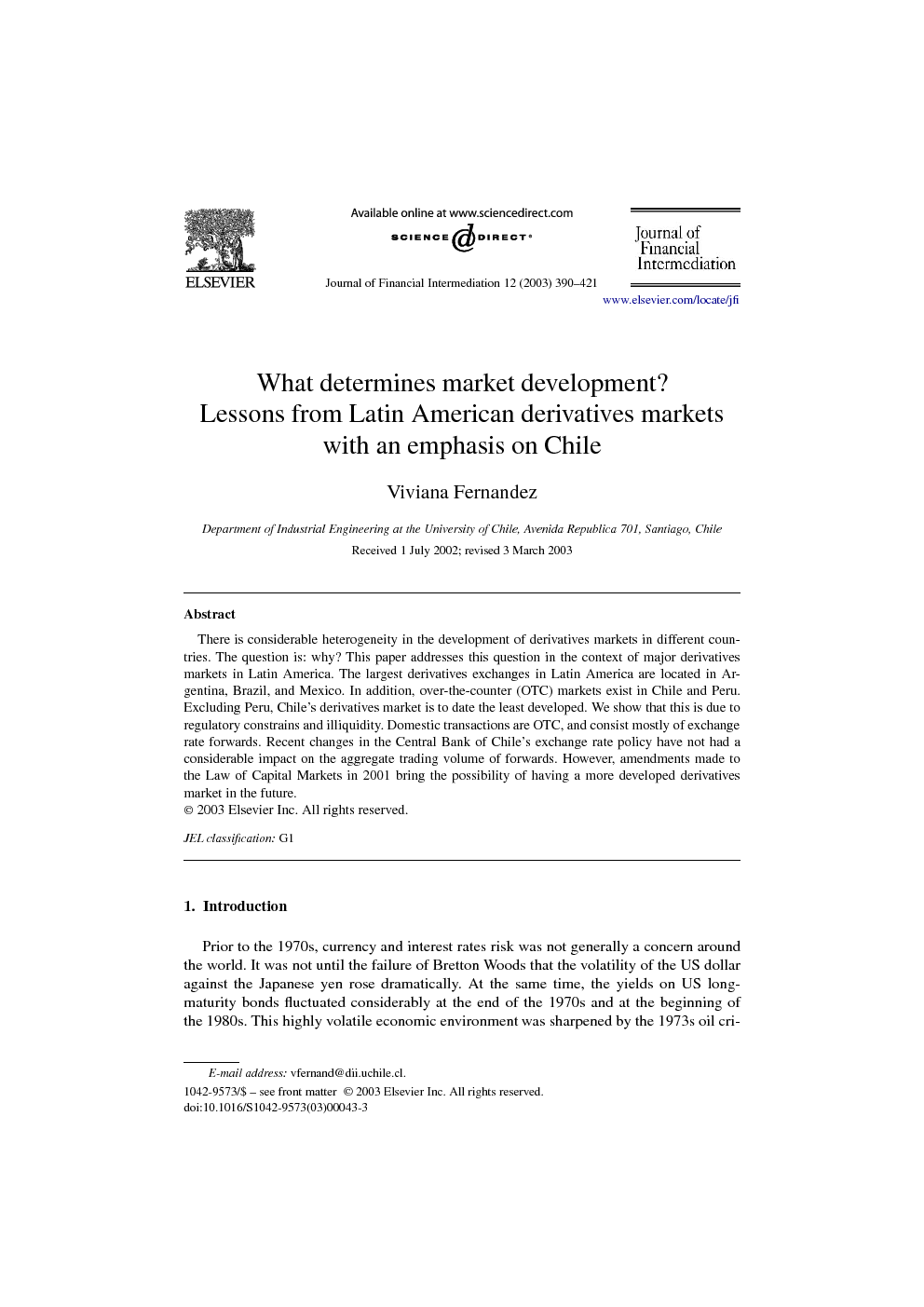 There is considerable heterogeneity in the development of derivatives markets in different countries. The question is: why? This paper addresses this question in the context of major derivatives markets in Latin America. The largest derivatives exchanges in Latin America are located in Argentina, Brazil, and Mexico. In addition, over-the-counter (OTC) markets exist in Chile and Peru. Excluding Peru, Chile's derivatives market is to date the least developed. We show that this is due to regulatory constrains and illiquidity. Domestic transactions are OTC, and consist mostly of exchange rate forwards. Recent changes in the Central Bank of Chile's exchange rate policy have not had a considerable impact on the aggregate trading volume of forwards. However, amendments made to the Law of Capital Markets in 2001 bring the possibility of having a more developed derivatives market in the future.

Derivatives began to be actively traded between the mid-1970s and the mid-1980s on and outside exchanges in most industrialized countries. According to information gathered by The Bank of International Settlements, at the end of April 2001 the value of OTC positions outstanding was over US$99 trillion, while the value of positions outstanding in organized exchanges was approximately US$20 trillion. In Latin America, the largest derivatives exchanges are located in Argentina (MATBA, ROFEX), Brazil (BM&F, BOVESPA), and Mexico (MexDer). In addition, OTC markets exist in Chile and Peru. The contracts regularly traded in Chile are US$/Chilean peso and US$/Unidad de Fomento (UF) forwards. Other types of derivatives, such as individual stock options and stock indices options have been barely traded. In the case of Chile, the causes appear to be low market liquidity and regulatory constraints faced by institutional investors. However, recent amendments to the Law of Capital Markets—which involve the creation of an exchange for emerging firms, and the existence of multi-fund AFPs, among others—might boost the derivatives market. Meanwhile, foreign exchange rate derivatives continue to be the most actively traded. In our analysis, we examined the effect of the elimination of the floating band of the US dollar against the Chilean peso in 1999 on forwards turnover. The figures showed us that, at least until December 2001, the exchange rate had not been significantly more volatile. And, therefore, the forwards market has not become noticeably more active. However, economic agents have now switched to shorter-maturity contracts as the exchange rate insurance provided by the floating band is no longer available. A subject for future research is to analyze the impact that the amendments made to the Chilean Law of Capital Markets might have on the domestic derivatives market. Until now, OTC markets for derivatives on foreign exchange and, more recently, on interest rates continue to be the only ones in existence. Exchange trading of derivatives has not resumed yet, and the big question is if it ever will.