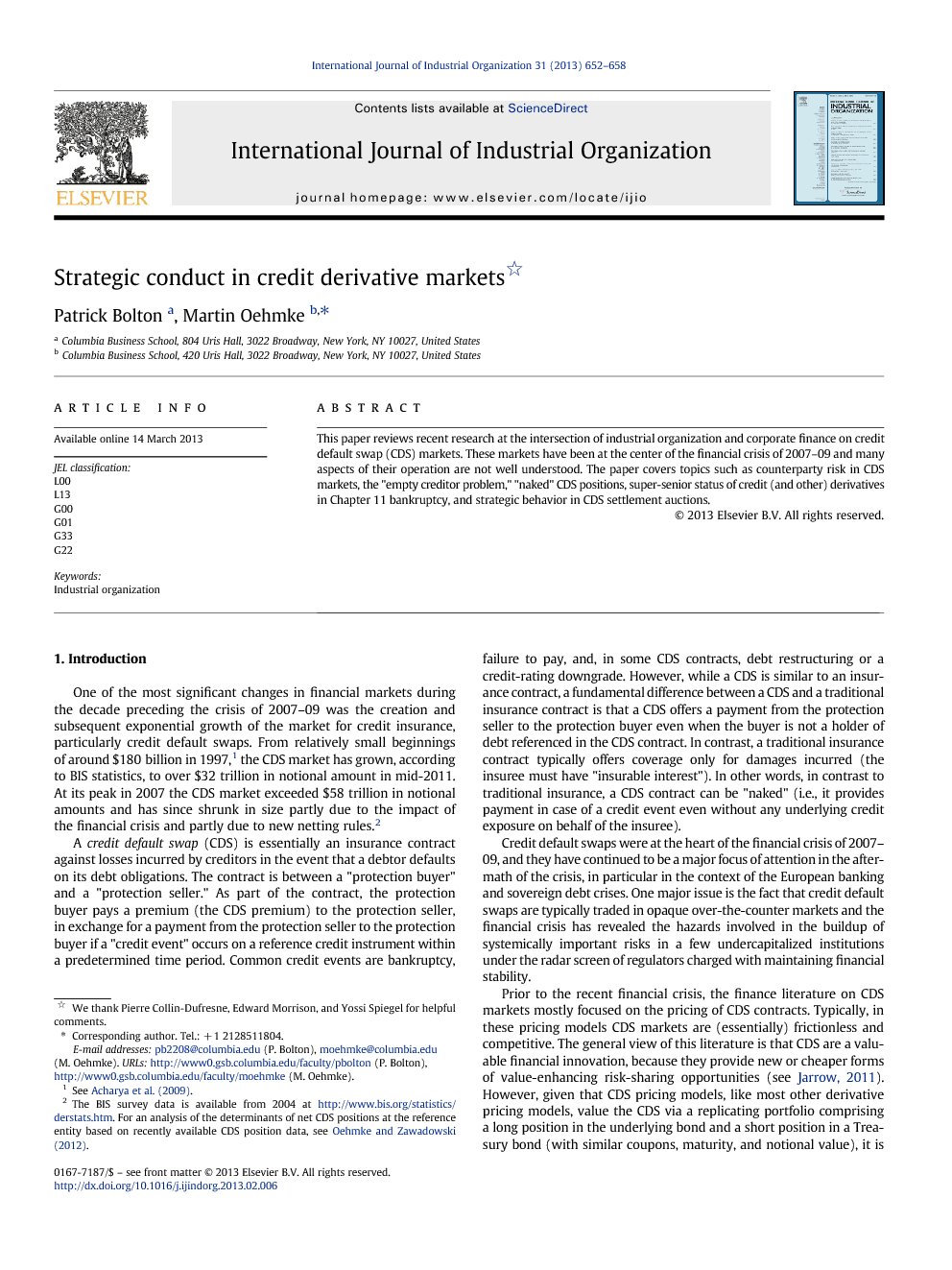 This paper reviews recent research at the intersection of industrial organization and corporate finance on credit default swap (CDS) markets. These markets have been at the center of the financial crisis of 2007–09 and many aspects of their operation are not well understood. The paper covers topics such as counterparty risk in CDS markets, the "empty creditor problem," "naked" CDS positions, super-senior status of credit (and other) derivatives in Chapter 11 bankruptcy, and strategic behavior in CDS settlement auctions.

This short review of recent research on strategic conduct in CDS markets highlights that, while CDS markets have grown to play a major role in the economy, and while some important issues relating to strategic conduct in this market have been identified, the economics of CDS markets are still imperfectly understood and many open questions remain for future research. The burgeoning literature reviewed here has only scratched the surface and each of the topics discussed above still requires deeper analyses. Going forward, there are three major policy initiatives that are likely to affect CDS markets substantially. The first is the implementation of the transition of standardized CDS away from OTC markets to central clearing platforms. Biais et al. (2012a) build on their earlier model of optimal insurance contracting in the presence of counterparty risk to analyze the costs and benefits of OTC markets versus trading on a CCP. They show that when the CCP is optimally designed, the CCP dominates OTC markets. The reason is that in general a CCP can make more efficient use of the mutualization of counterparty risks. Unfortunately, it is far from clear that current CCP proposals are designed optimally (i.e., maximize the benefits of mutualization). One specific concern, for example, is that the CCP itself may become a source of systemic risk, should rules on margin requirements be poorly designed. This is why the Dodd–Frank Act of 2010 includes provisions that require the Financial Stability Oversight Council (FSOC) to monitor CCPs and allows the FSOC to put any CCP that is a threat to financial stability under the supervision of the Federal Reserve Board. Another potential design flaw of existing CCPs is that they are far from transparent and thus may continue to protect the oligopoly rents of the large dealers (see Bolton et al., 2012). The second major initiative is the implementation of restrictions on proprietary trading by banks via the so-called Volcker Rule.13 To the extent that trading in CDS is not a hedging but a speculative activity, dealer banks may face restrictions in their CDS trading. This issue rose to prominence in the spring of 2012 with the disclosure of massive losses from CDS positions incurred by JPMorgan Chase (through the so-called London Whale).14 The third major policy question for the coming years concerns the special status of derivatives and swaps in bankruptcy or bank receivership. As pointed out above, current regulations give banks inefficient incentives to rely on funding through swaps and repos for their financing as opposed to more stable funding sources such as long-term unsecured bond financing. This is a major loophole in existing financial regulations, which seek to eliminate moral hazard in lending to banks. Left unchanged, this loophole could make short-term wholesale funding through repos even more the preferred source of cheap funding for banks in the next lending boom.