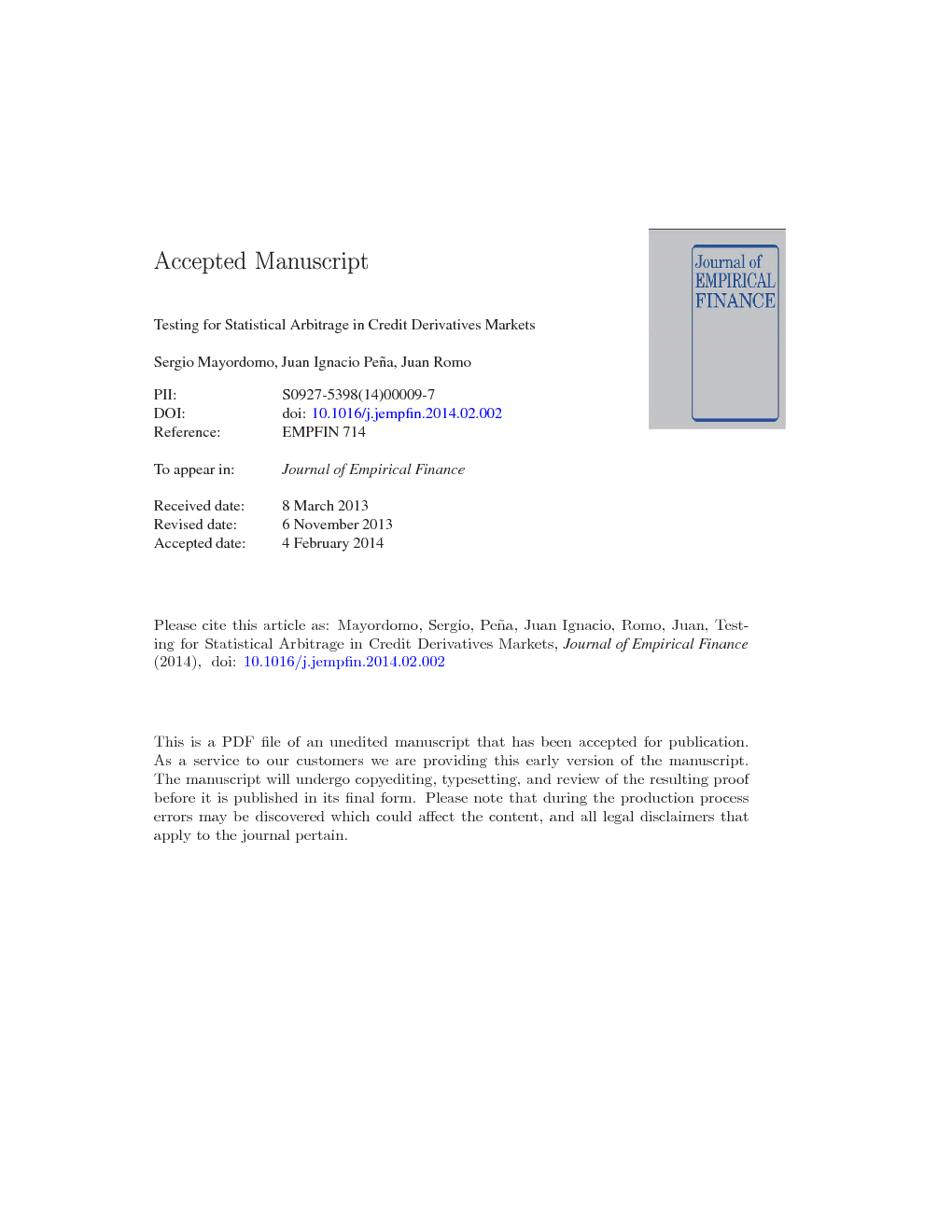 This paper studies statistical arbitrage opportunities in credit derivatives markets using strategies combining Credit Default Swaps (CDS) and Asset Swap Packages (ASP) by means of an improved statistical arbitrage test. Using four different databases (GFI, Reuters, CMA, and JP Morgan) from 2005 to 2009, we find persistent mispricings between the CDS and ASP spreads of individual firms, which should be priced similarly, before and during the 2007–2009 financial crisis. These mispricings are more frequent in low credit quality bonds and appear to offer arbitrage opportunities. We also aggregate the firms’ CDS and ASP in a portfolio and still find persistent deviations, mainly in the lower rated bonds. In aggregate terms the deviations from the parity relation can be explained from systematic factors such as financing costs, counterparty risk, and global risk. However, after considering realistic estimations of funding and trading costs, all these mispricings are unlikely to provide profitable arbitrage opportunities.

The 2007–2009 financial crisis and its possible consequences for the regulation of financial markets makes the study of the possible persistent mispricing in financial asset markets a topic of salient relevance. In this paper, we make the following contributions to this important topic. First, we apply the statistical arbitrage methodology to study the existence of deviations between the prices of CDS and ASP, at the individual firm level and at the portfolio level. At the individual firm level, we find evidence of a number of persistent deviations between ASP and CDS before and during the financial crisis of 2007–2009. When we aggregate the firms’ CDS and ASP in a portfolio we still find persistent deviations. The empirical evidence suggests that higher the bond’s (or bond portfolio’s) credit risk, the higher the probability of persistent deviations between CDSs and ASPs spreads. In aggregate terms the deviations from the parity relation can be explained from systematic factors such as funding costs, counterparty risk, and global risk. Once realistic assessments of the funding costs are included, all these mispricing are unlikely to provide profitable arbitrage opportunities. The second contribution is a subsampling-based enhanced version of the previous statistical arbitrage tests that allow for non-normal, autocorrelated, and heteroskedastic innovations of the incremental trading profits. The new test finds potential arbitrage opportunities with lower downside risk than existing alternatives in the particular sample used in this study. Our third contribution is methodological. We present a procedure which is more appropriate for misprice testing than the cointegration analysis, because it focuses on the existence of statistical arbitrage whenever only long positions in CDSs and ASPs are needed. This method is more appropriate because taking short positions in bonds included in an ASP in not likely to be feasible in most cases. Looking forward, we expect more definite evidence on other arbitrage strategies as well as in other credit derivatives. The new test and the procedure (long positions only) of this paper can also be applied to other financial markets.