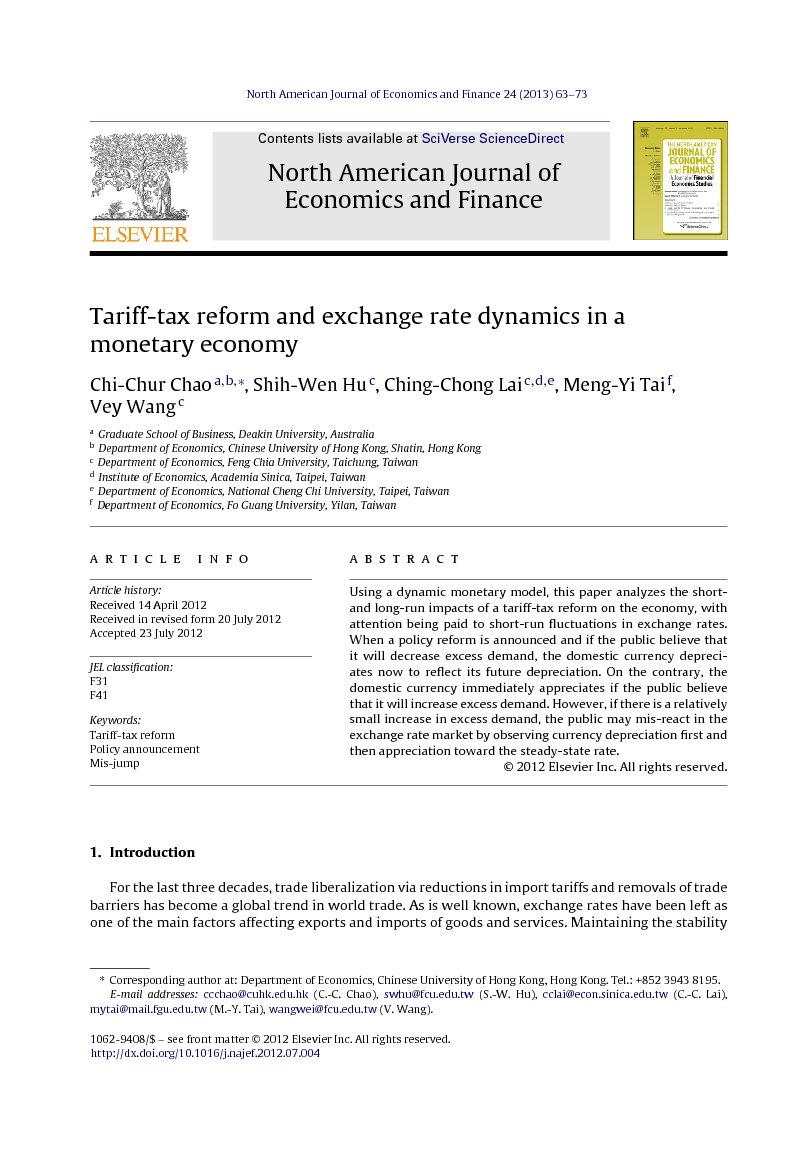 Using a dynamic monetary model, this paper analyzes the short- and long-run impacts of a tariff-tax reform on the economy, with attention being paid to short-run fluctuations in exchange rates. When a policy reform is announced and if the public believe that it will decrease excess demand, the domestic currency depreciates now to reflect its future depreciation. On the contrary, the domestic currency immediately appreciates if the public believe that it will increase excess demand. However, if there is a relatively small increase in excess demand, the public may mis-react in the exchange rate market by observing currency depreciation first and then appreciation toward the steady-state rate.

For the last three decades, trade liberalization via reductions in import tariffs and removals of trade barriers has become a global trend in world trade. As is well known, exchange rates have been left as one of the main factors affecting exports and imports of goods and services. Maintaining the stability of foreign exchange markets has thus been a target for many economies. However, the recent turmoil in global financial markets and accompanying declines in the U.S. dollar have raised new concerns about global financial order and the stability of the exchange-rate systems. In the literature on international finance, Dornbusch (1976) was the first to analyze the dynamic behavior of exchange rates in a monetary economy. A permanent monetary expansion causes the fluctuation in the exchange rate to be greater in the short run than in the long run. The extent of this short-run overshooting depends on how slowly the goods market adjusts relative to asset markets. Later studies (e.g., Agénor, 1995, Ahtiala, 1998, Chang and Lai, 1997, Chao et al., 2011, Devereux and Purvis, 1990, Frenkel and Rodriguez, 1982 and Wilson, 1979) focused on how monetary and fiscal policies affect dynamic adjustments of the economy. A common feature in these studies is that the exchange rate may either overshoot or undershoot its long-run equilibrium level.1 Nonetheless, related issues on commercial policy, such as import tariffs and exchange rates, remain unexplored. Differing from monetary or fiscal policies, in reducing tariffs trade liberalization directly yields a loss of revenue to the government. Many countries have considered raising other taxes, such as consumption taxes, to maintain a balanced government budget.2 The studies on this neutral tariff-tax reform can be found in Michael, Hatzipanayotou, and Miller (1993) and Hatzipanayotou, Michael, and Miller (1994). However, their studies are confined in the real side of the economy, in which monetary phenomena, such as movements in exchange rates, cannot be examined. The purpose of this paper is to fill up this lacuna by investigating the dynamic impacts of a neutral tariff-tax reform on key monetary variables, such as prices and exchange rates, in a monetary economy. However, it should be mentioned that the tax reform is usually featured by an anticipated implementation in nature. For example, Taiwan joined the World Trade Organization (WTO) on January 1, 2002. At that time, the average tariff rate on agricultural products was negotiated to decrease from 20.02% in 2001 to 14.01% in 2002, and was finally reduced to 12.86% at the end of the year 2004 or in 2007. In addition, the average tariff rate on industrial products was negotiated to decrease from 6.03% in 2001 to 5.78% in 2002, and was finally reduced to 4.15% at the end of the year 2002 or in 2004. In view of this fact, it seems plausible that the tariff-tax reform is usually conducted with a pre-announcement, and hence the analysis dealing with an anticipated tariff-tax reform may be more realistic in the real world. In doing so, how the relevant macro variables will react to the new information contained in the announcement of the neutral tariff-tax reform can be fully understood. The remainder of this paper is organized as follows. The analytical framework is outlined in Section 2, while Section 3 characterizes the dynamic behavior of the economy associated with the tariff-tax reform. Section 4 concludes.

Using a dynamic monetary model, in this paper we have analyzed the short- and long-run impacts of a tariff-tax reform on the economy. The tariff-tax reform considered is a design that replaces tariffs with a point-by-point increase in consumption taxes. By paying much attention to short-run fluctuations of exchange rates in terms of overshooting, undershooting or mis-jumps, we have investigated their dynamic paths following the announcement of the tariff-tax reform. When the tariff reform is announced and if the public believe it will decrease excess demand, the domestic currency will depreciate now to reflect future depreciation. On the contrary, the domestic currency will appreciate immediately if the public believe it will raise excess demand. However, if there is a relatively small increase in excess demand, the public may mis-react in the exchange rate market by observing currency depreciation first and only then the currency's appreciation toward the steady-state rate.