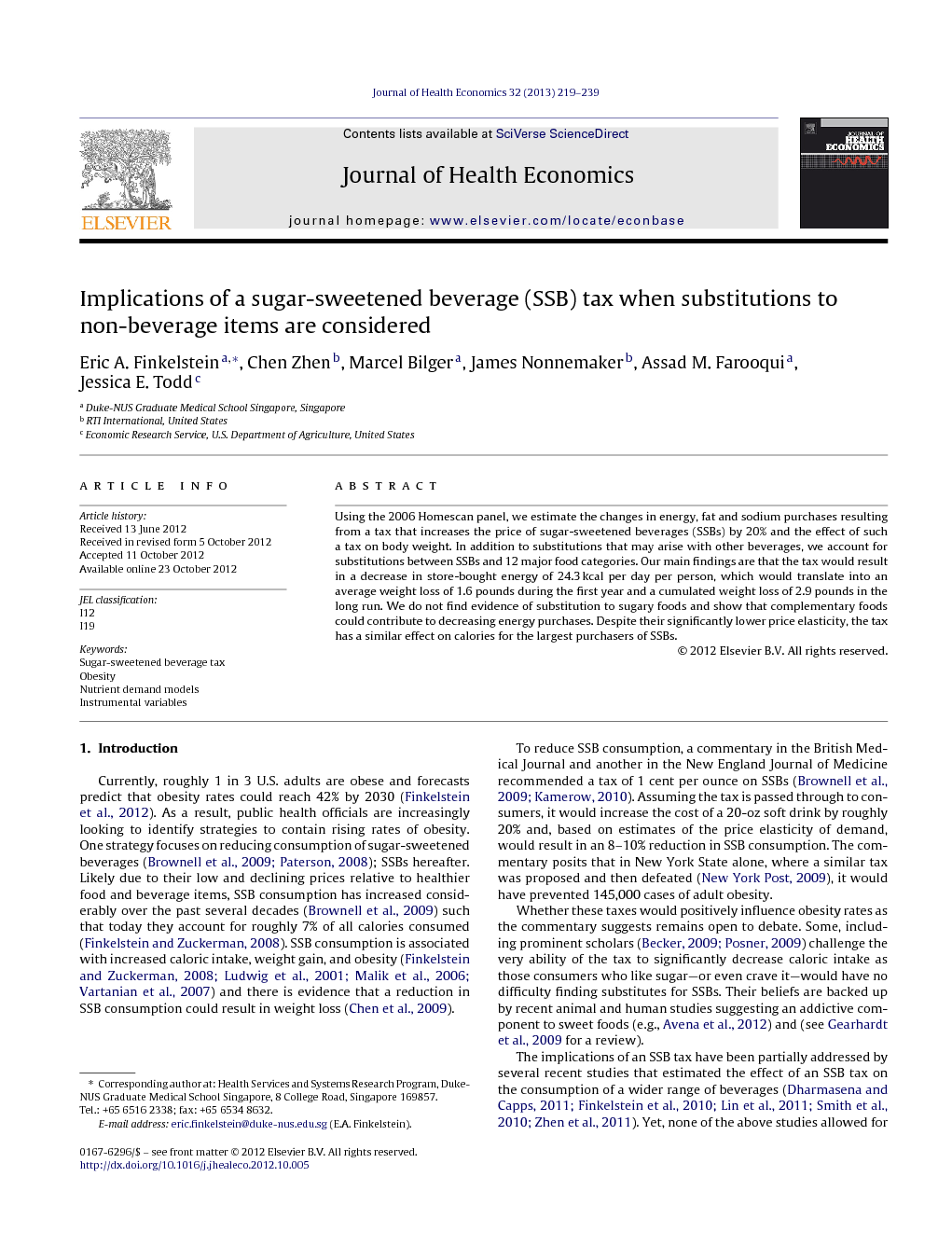 Using the 2006 Homescan panel, we estimate the changes in energy, fat and sodium purchases resulting from a tax that increases the price of sugar-sweetened beverages (SSBs) by 20% and the effect of such a tax on body weight. In addition to substitutions that may arise with other beverages, we account for substitutions between SSBs and 12 major food categories. Our main findings are that the tax would result in a decrease in store-bought energy of 24.3 kcal per day per person, which would translate into an average weight loss of 1.6 pounds during the first year and a cumulated weight loss of 2.9 pounds in the long run. We do not find evidence of substitution to sugary foods and show that complementary foods could contribute to decreasing energy purchases. Despite their significantly lower price elasticity, the tax has a similar effect on calories for the largest purchasers of SSBs.

Currently, roughly 1 in 3 U.S. adults are obese and forecasts predict that obesity rates could reach 42% by 2030 (Finkelstein et al., 2012). As a result, public health officials are increasingly looking to identify strategies to contain rising rates of obesity. One strategy focuses on reducing consumption of sugar-sweetened beverages (Brownell et al., 2009 and Paterson, 2008); SSBs hereafter. Likely due to their low and declining prices relative to healthier food and beverage items, SSB consumption has increased considerably over the past several decades (Brownell et al., 2009) such that today they account for roughly 7% of all calories consumed (Finkelstein and Zuckerman, 2008). SSB consumption is associated with increased caloric intake, weight gain, and obesity (Finkelstein and Zuckerman, 2008, Ludwig et al., 2001, Malik et al., 2006 and Vartanian et al., 2007) and there is evidence that a reduction in SSB consumption could result in weight loss (Chen et al., 2009). To reduce SSB consumption, a commentary in the British Medical Journal and another in the New England Journal of Medicine recommended a tax of 1 cent per ounce on SSBs (Brownell et al., 2009 and Kamerow, 2010). Assuming the tax is passed through to consumers, it would increase the cost of a 20-oz soft drink by roughly 20% and, based on estimates of the price elasticity of demand, would result in an 8–10% reduction in SSB consumption. The commentary posits that in New York State alone, where a similar tax was proposed and then defeated (New York Post, 2009), it would have prevented 145,000 cases of adult obesity. Whether these taxes would positively influence obesity rates as the commentary suggests remains open to debate. Some, including prominent scholars (Becker, 2009 and Posner, 2009) challenge the very ability of the tax to significantly decrease caloric intake as those consumers who like sugar—or even crave it—would have no difficulty finding substitutes for SSBs. Their beliefs are backed up by recent animal and human studies suggesting an addictive component to sweet foods (e.g., Avena et al., 2012) and (see Gearhardt et al., 2009 for a review). The implications of an SSB tax have been partially addressed by several recent studies that estimated the effect of an SSB tax on the consumption of a wider range of beverages (Dharmasena and Capps, 2011, Finkelstein et al., 2010, Lin et al., 2011, Smith et al., 2010 and Zhen et al., 2011). Yet, none of the above studies allowed for substitution from SSBs to non-beverage products that may result from the tax.1 This is a significant limitation as these studies do not fully address the concern that individual taste or sugar cravings could result in substituting SSBs with sugary, highly caloric foods. Because SSBs are among the most energy dense beverages, any switching away from SSBs to other beverages is almost guaranteed to reduce total beverage calories. The implications of the tax are less predictable when switching to non-beverage items is considered. This results because some food items, such as candy or cookies, are higher in calories per dollar than SSBs. As a result, if someone switches from SSBs to these foods as a result of a tax, net calories could actually increase.Schroeter et al. (2008)’s theoretical model yields similarly counterintuitive results when predicting the effects of a tax on away from home foods. These results stress that to assess the net effect of an SSB (or any food) tax, one needs to compute the change in calories resulting from the taxed product, as well as increases or decreases resulting from complementary or substitute products, and in this case, not only from other beverages. This paper aims to fill this gap by revisiting the extent to which targeted SSB taxes would reduce caloric purchases and weight when considering substitution to other foods and beverages. This includes, in addition to the beverages taken into account by Finkelstein et al. (2010), candies and cookies, which are both higher in calories per dollar spent than SSBs, and several other commonly purchased foods that are potential substitutes or complements to SSBs. Using these data, we estimate the changes not only in calories, but also in fat and sodium purchases resulting from a tax that increases SSB prices by 20%. These extensions are important as a healthy diet requires limiting not only caloric, but also fat and sodium intake (U.S. Department of Agriculture and U.S. Department of Health and Human Services, 2010). Because SSBs are low in both, it is possible that an SSB tax could increase consumption of both fat and sodium, thus reducing any health gains that may be achieved through reduced caloric intake. Unlike prior studies, we estimate the effects of SSB taxes using an instrumental variables technique which controls for potential price endogeneity. This is an important advancement as the prices used in prior studies may not be truly exogenous to the purchaser (i.e., driven by changes in both supply and demand), may be correlated with unobservable factors that influence demand, or may suffer from significant measurement error. An instrumental variables approach addresses these concerns. Finally, we estimate quantile regressions to explore the extent to which SSB taxes differentially affect those who are the largest purchasers of calories from both SSBs and all included food categories. The former explores whether the taxes work better among the highest SSB consumers, presumably the intended target, whereas the latter explores the extent to which the tax may differentially affects those who purchase the most calories (from stores) and therefore may be more likely to be obese. Section 2 presents the data sources, variable definitions and descriptive statistics. Section 3 covers our econometric models, identification strategy, and energy-to-weight loss computation methods. Section 4 presents our estimates for both aggregate and detailed changes in store-bought nutrients caused by the SSB tax along with the weight loss predictions. Section 5 concludes.