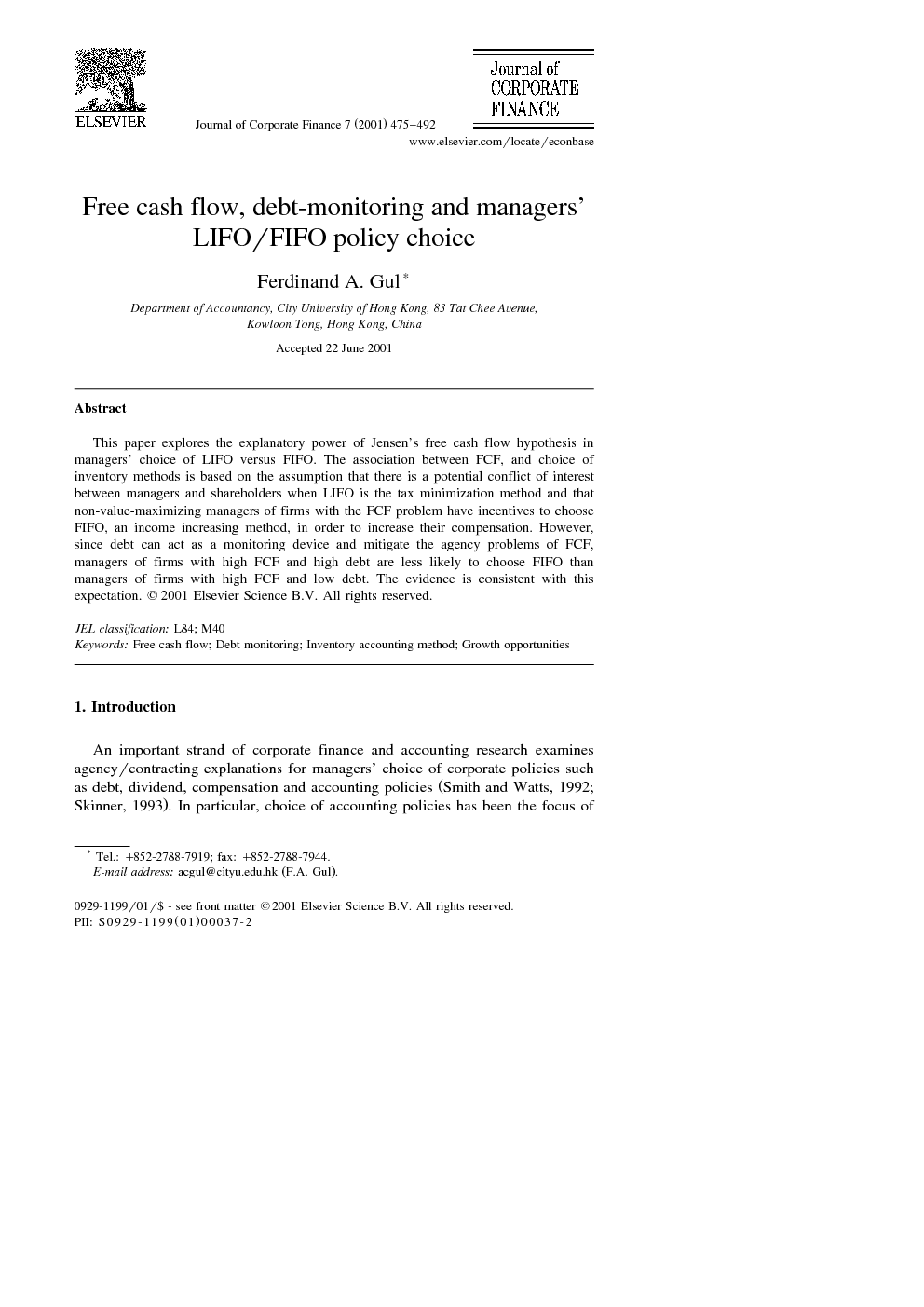 This paper explores the explanatory power of Jensen's free cash flow hypothesis in managers' choice of LIFO versus FIFO. The association between FCF, and choice of inventory methods is based on the assumption that there is a potential conflict of interest between managers and shareholders when LIFO is the tax minimization method and that non-value-maximizing managers of firms with the FCF problem have incentives to choose FIFO, an income increasing method, in order to increase their compensation. However, since debt can act as a monitoring device and mitigate the agency problems of FCF, managers of firms with high FCF and high debt are less likely to choose FIFO than managers of firms with high FCF and low debt. The evidence is consistent with this expectation.

An important strand of corporate finance and accounting research examines agency/contracting explanations for managers' choice of corporate policies such as debt, dividend, compensation and accounting policies Smith and Watts, 1992 and Skinner, 1993. In particular, choice of accounting policies has been the focus of some research interest. This paper focuses on managers' choice of inventory methods LIFO versus FIFO. Although prior studies provide some insight on why firms select LIFO, the understanding as to why firms remain on FIFO is still unclear and subject to some controversy Biddle, 1989, Niehaus, 1989, Cushing and LeClere, 1992 and Christie and Zimmerman, 1994.1 This paper attempts to provide an explanation for managers' choice of LIFO/FIFO by drawing on Jensen's (1986) Free Cash Flow (FCF) theory. FCF is defined as the excess cash available after mangers have invested in net present value (NPV) projects (Rubin, 1990, p. 81). According to Jensen, 1986 and Jensen, 1989, low growth/high FCF firms face an agency problem in the sense that managers indulge in ‘value-destroying activities’ such as increasing their perquisites, investing in negative NPV projects and generally acting against shareholders' interests. Jensen (1993, p. 849) also asserts that lucrative compensation and benefits are other ways in which the agency costs of FCF can manifest themselves. This suggests that managers of low growth/high FCF firms are more likely to choose FIFO, an income increasing method, rather than LIFO in order to receive higher compensation. Other reasons why non-value-maximizing managers may choose FIFO include job security Weisbach, 1988 and Christie and Zimmerman, 1994 and the need to mask non-value-maximizing expenditure from outsiders (Christie and Zimmerman, 1994). Jensen, 1986 and Jensen, 1989 also argues that debt can mitigate the agency problems between shareholders and managers of firms with the FCF problem and motivate management to act in the interests of the shareholders. Debt not only reduces the FCF but also provides discipline to management through the debt market. This debt monitoring hypothesis is formalized by Harris and Raviv (1990) and Stulz (1990) and empirically demonstrated by Maloney et al. (1993) and Gul and Tsui (1998). Following the debt monitoring hypothesis, managers of firms with the FCF problem and high debt are less likely to choose FIFO (and act against the interest of the shareholders), than managers of firms with the FCF problem and low levels of debt, ceteris paribus.2 The above reasoning regarding the role of FCF and debt monitoring was also examined by Gul and Tsui (1998) in a recent audit pricing study. They tested the hypothesis that there will be a positive association between FCF and audit fees and that the positive association is weaker for firms with higher levels of debt. They argued that since managers of low growth/high FCF firms are involved in non-value maximizing activities they are also expected to mask non-optimal expenditures by accounting manipulations (p. 220). Thus, auditors respond to the higher probability of accounting misstatements by exerting greater audit effort and charging higher audit fees. However, the existence of debt as a monitoring device for low growth/high FCF firms is expected to mitigate the FCF agency problems and thus reduce the positive association between FCF and audit fees. The results of their study are consistent with the hypotheses. The same reasoning is applied to managers' choice of LIFO/FIFO. Five proxies for growth are factor analyzed in order to obtain investment opportunity set (IOS) index. Firms with scores at the bottom quartile are categorized as low growth. The values for the independent variables, FCF and debt and the control variables size, inventory materiality, current ratio, average tax loss carryforward and return on assets are obtained by averaging the observations from Compustat for the years 1977, 1978, 1979 and 1980. Appropriate adjustments are made to all the relevant variables for LIFO firms to convert them to a FIFO basis. The dependent variable is the firm's inventory method, LIFO (coded 0) versus FIFO (coded 1) for the year 1980. Niehaus (1989) also examines LIFO/FIFO choice for the same year and provides information on compensation and industries facing price declines. The information on compensation provides the basis for the assumption in the paper that managers would prefer FIFO in order to improve their compensation, ceteris paribus. Logistic regressions are used to test the hypothesis. The significant negative interaction results between FCF and debt for low growth firms suggest that increasing levels of both debt and FCF are associated with a lower likelihood of managers choosing FIFO. These results are consistent with Jensen, 1986 and Jensen, 1989 FCF theory and the debt monitoring hypothesis. Another explanation for the results which draws from the debt covenant hypothesis may also be considered. Managers of firms with high debt and high FCF are less likely to choose FIFO than managers of high debt and low FCF because firms with high FCF are less likely to be close to debt covenant violations than firms with low FCF. The coefficients for debt in all the regressions are significant and positive. It is not possible to completely rule out this explanation but two reasons suggest that the FCF and debt monitoring is a more plausible explanation. First, the significant interaction results were only found for the low growth subsample and not for the high growth subsample. Second, a logistic regression with the full sample (N=285) shows that the interaction term for FCF and debt is insignificant.3 Section 2 provides the theoretical background for the paper and Section 3 discusses the research method including variables specification. This is followed in Section 4 by the data analyses and results. Section 5 presents a discussion and summary of the results.

This study provides evidence to show that managers of low growth/high FCF firms with high debt are more likely to act in the interest of shareholders and therefore less (more) likely to choose FIFO (LIFO). Overall, these results increase our understanding of the determinants of accounting policy choice and add to the literature on finance theory in two ways. First, and most importantly, it is the first study to demonstrate the role of FCF and debt as a monitoring device in managers' choice of inventory accounting method. Future research should examine the role of FCF and debt in other accounting methods choice. Second, the study provides some support for a stream of literature on the tax benefits hypothesis for the choice of LIFO/FIFO.