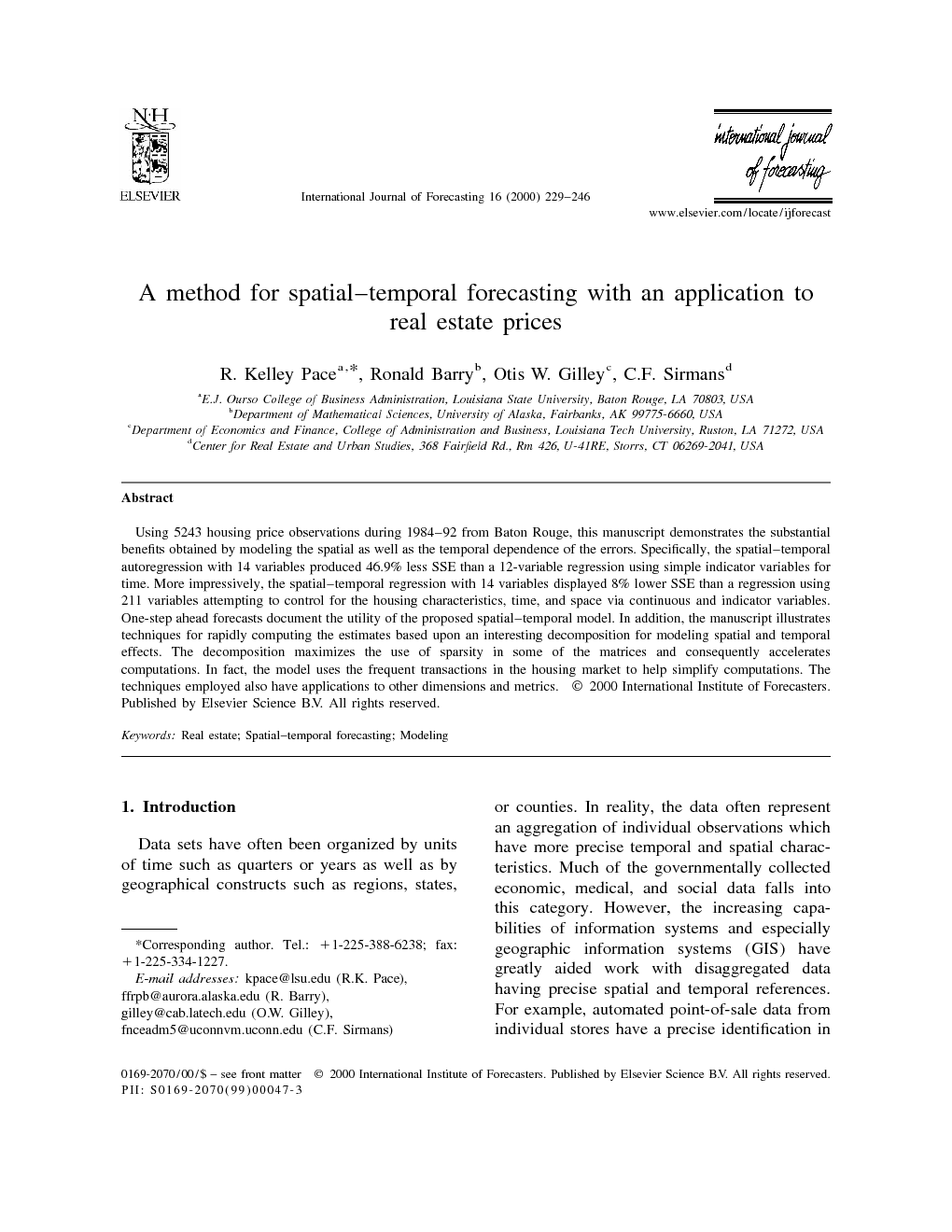 Using 5243 housing price observations during 1984–92 from Baton Rouge, this manuscript demonstrates the substantial benefits obtained by modeling the spatial as well as the temporal dependence of the errors. Specifically, the spatial–temporal autoregression with 14 variables produced 46.9% less SSE than a 12-variable regression using simple indicator variables for time. More impressively, the spatial–temporal regression with 14 variables displayed 8% lower SSE than a regression using 211 variables attempting to control for the housing characteristics, time, and space via continuous and indicator variables. One-step ahead forecasts document the utility of the proposed spatial–temporal model. In addition, the manuscript illustrates techniques for rapidly computing the estimates based upon an interesting decomposition for modeling spatial and temporal effects. The decomposition maximizes the use of sparsity in some of the matrices and consequently accelerates computations. In fact, the model uses the frequent transactions in the housing market to help simplify computations. The techniques employed also have applications to other dimensions and metrics.

This paper demonstrated some simple, easily computed techniques for taking into account both temporal and spatial information. Relative to using an extensive set of indicator variables, modeling correlations among the spatial and temporal errors produced a better goodness-of-fit coupled with much higher levels of parsimony in the regression equation. Specifically, the spatial–temporal regression with 14 variables exhibited 8% less sum-of-squared errors than the trend surface model regression with 211 variables. In this example, the extensive set of indicators over time and space did result in low long-range correlations among errors but still exhibited substantial short-range correlations among errors. In contrast, the spatial–temporal regression displayed lower levels of correlation among errors at all ranges. The spatial–temporal regression also displayed good ex-sample forecasting, an important desideratum in many contexts. For example, most local tax assessments in the US rely upon statistical predictions of housing values. In addition, primary and secondary mortgage lenders have begun exploring the use of statistical forecasting of housing prices as opposed to employing appraisers. Indicator set approaches do not lead as naturally to such predictions. Other applications such as creating constant quality indices could also benefit from jointly modeling the errors jointly over time and space. The continuous nature of the spatial variables in the spatial–temporal models allows the creation of a constant quality index surface as opposed to a set of separate indices. Naturally, specification of the correlations among errors across time and space could improve the quality of estimates in hedonic pricing applications. Structuring the problem to employ lower triangular weighting matrices comprised of individual sparse neighbor matrices and linear filter routines resolves the seemingly difficult problem of differencing each error from numerous other errors and avoids lengthy determinant computations. As many data in economics have specific spatial and temporal characteristics, these techniques could prove useful in other contexts as well. The becomes especially true when considering alternative spatial metrics which involve variables other than physical location. For example, Case, Rosen and Hines (1993) used separate metrics involving physical location, race, and income to improve on a standard regression’s ability to explain public expenditures. They found significant correlations among errors based upon both ordering by physical location and by race. Note, their data spanned the period 1970–85 and hence had a temporal dimension as well. As a potential extension to our work, decomposition of the weight matrix W into more than the physical location and temporal components examined herein could potentially produce additional econometric benefits without incurring significantly greater computational costs.