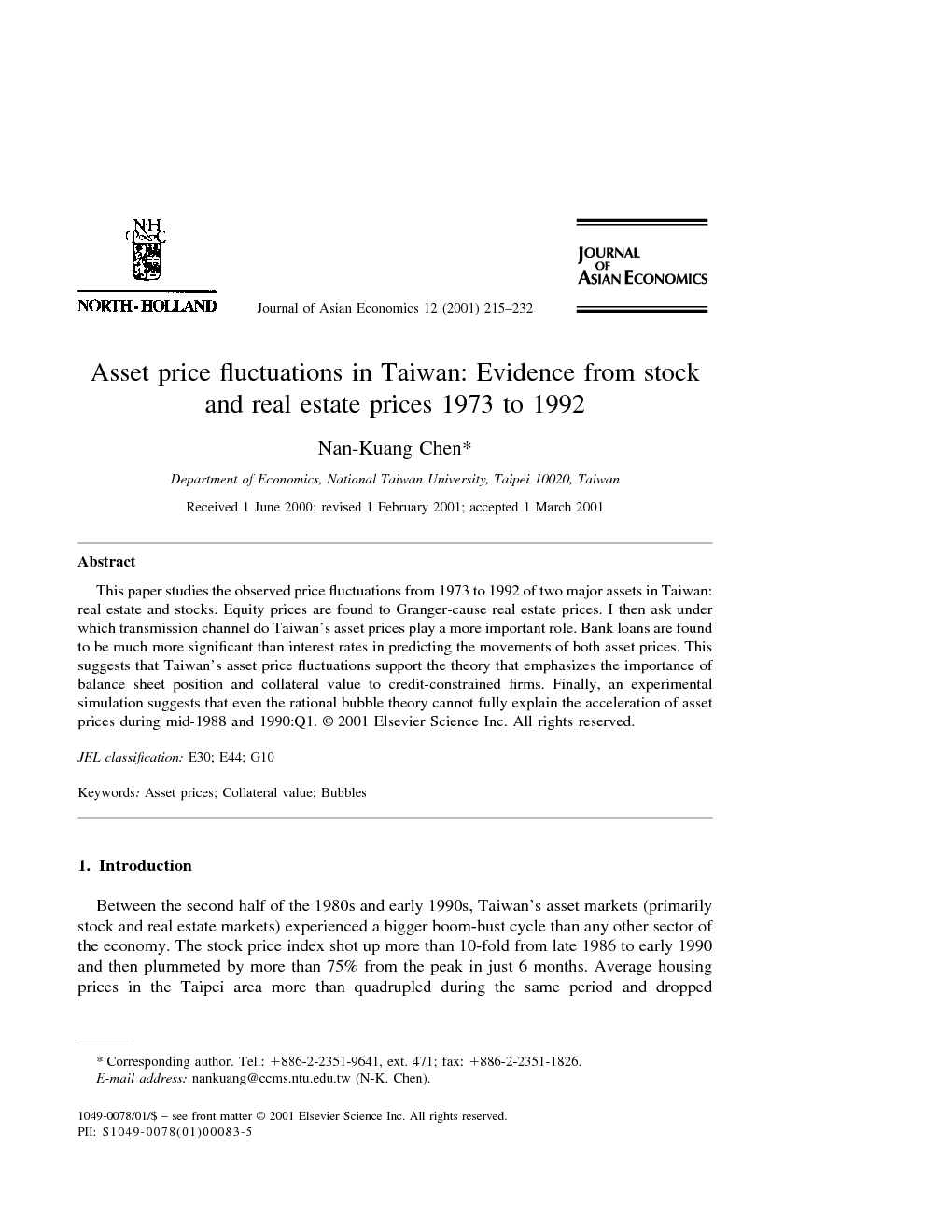 This paper studies the observed price fluctuations from 1973 to 1992 of two major assets in Taiwan: real estate and stocks. Equity prices are found to Granger-cause real estate prices. I then ask under which transmission channel do Taiwan’s asset prices play a more important role. Bank loans are found to be much more significant than interest rates in predicting the movements of both asset prices. This suggests that Taiwan’s asset price fluctuations support the theory that emphasizes the importance of balance sheet position and collateral value to credit-constrained firms. Finally, an experimental simulation suggests that even the rational bubble theory cannot fully explain the acceleration of asset prices during mid-1988 and 1990:Q1.

Between the second half of the 1980s and early 1990s, Taiwan’s asset markets (primarily stock and real estate markets) experienced a bigger boom-bust cycle than any other sector of the economy. The stock price index shot up more than 10-fold from late 1986 to early 1990 and then plummeted by more than 75% from the peak in just 6 months. Average housing prices in the Taipei area more than quadrupled during the same period and dropped afterwards, though less drastically. Such large fluctuations of Taiwanese asset prices have often been considered as the boom and burst of a bubble. During the same period, however, the big swing in Taiwan’s asset prices was far from a unique experience. Japan and Scandinavia went through an even more dramatic inflation and deflation in asset prices. In fact, nearly all other OECD countries experienced a similar pattern of asset price fluctuations around 1984 to 1993. In emerging economies, financial crises of this type have been particularly prevalent since the early 1980s, including Argentina, Chile, Mexico, and several East Asian countries. These tremendous fluctuations in asset prices not only have a huge impact on the net worth of corporations and individuals, but also have significant and persistent effects on real economic activities Higgins and Osler 1997, Kaminsky and Reinhart 1996a and Kaminsky and Reinhart 1996b.1 A common background for most of these crises was financial deregulation and substantial credit expansion. Credit expansion is then accompanied by a rapid rise in asset prices such as real estate and stocks.2 At a certain point, the asset markets collapse and their prices plunge, due to a change in the regulatory or economic environment.3 The collapse of asset prices and the exposure of banks to equity and real estate markets therefore initiate defaults of debtors, banking crises, and persistent economic downturns. Sometimes this may be accompanied by an exchange rate crisis.4 The Japanese asset price inflation that occurred in the 1980s provides a good example of this type of phenomenon. Financial liberalization throughout the 1980s led to an expansion in credit. The Nikkei 225 index rose from around 10,000 in 1985 to a peak of 38,916 in December 1989. The Bank of Japan then tightened money and this led to a sharp increase in interest rates in early 1990. The Nikkei 225 fell sharply down to 20,222 by October 1990. Commercial real estate prices dropped by as much as 70% from their peak (Peek and Rosengren, 1997). A severe banking crisis and recession followed. Furthermore, in the New England area of the U.S., the collapse of real estate markets following the boom in the mid-1980s eroded the net worth of banks due to huge losses on real estate loans. Together with a stricter regulatory bank capital requirement imposed about the same time, it caused a “capital crunch” (Peek and Rosengren, 1992).5 The boom in Taiwan’s real estate and stock prices that occurred in the second half of the 1980s seemed to be consistent with the above story. Financial liberalization throughout the 1980s deregulated interest rates and the exchange rate. Deregulation in the banking industry and securities markets also promoted competition among financial institutions. Finally, the lifting of the capital mobility restraint and the desire to suppress the pace of the NT dollars appreciation led to a hike in credit expansion. The monetary policy stance was also unprecedented eased during this period, with the monetary aggregates growing at unusually high rates (e.g., M1B growth reached 51% between 1986:Q4 to 1987:Q1). The stock price index climbed rapidly from around 1100 at the end of 1986 and reached its peak of 12,000 in early 1990. In August 1989, the central bank raised the rediscount rate twice from 4.5% to 7.75%, and increased the required reserve ratio by 4%, aiming to abate the high growth rate of money supply. More importantly, the central bank executed an array of radical selective credit control procedures to tighten credit expansion in land development and construction and securities investment. However, in early 1990, the asset markets went bust, the stock price index sank from around 12,000 to under 3000 in half a year, and the real estate market became sluggish if not outright collapsed. Economic activity was hit hard in the aftermath of the asset market slump. There are several channels through which an exogenous shock can affect asset prices. I borrow from the theoretical frameworks in which asset prices amplify exogenous shocks by way of various transmission channels. The theoretical hypotheses are then put to test to understand what role do Taiwan’s asset prices play in the interest rate channel and credit channel of transmission mechanism. Finally, although it is not this paper’s purpose to identify whether asset prices contain bubbles, I simulate bubble paths based on the rational bubble theory to test whether they can fully capture the acceleration of asset prices during mid-1988 and early 1990. The remainder of this paper is organized as follows. Section 2 discusses theoretical frameworks that are useful for understanding price movements of stocks and real estate in a dynamic setting and examines in detail the interaction of these two asset prices. Section 3 explores the factors behind the observed movements of these two asset prices, using a multivariate VAR. Given the assumption that asset prices are subject to bubbles during the late 1980s, I calculate hypothetical bubble paths to compare with the observed asset prices. Section 4 concludes.

This paper examines the relationship of Taiwan’s stock and real estate prices and tries to identify in which channel the asset prices play a role in amplifying the transmission mechanism. I find that stock prices tend to lead housing prices. An expansion of bank credit, rather than a lower rediscount rate, is likely to be the cause of asset price fluctuations. Stock and real estate prices then reinforce each other in accordance with the theory that emphasizes the importance of balance sheet position and collateral value to credit-constrained firms. A tentative experiment simulating the surge of asset prices in the late 1980s suggests that during mid-1988 and 1991:Q1, even the stochastic bubble theory could not fully capture the movements of asset prices. Several issues need to be addressed for future studies. Firstly, it is well known that the informal credit markets in developing countries play an important role in financing investment and consumption. It was estimated that Taiwan’s informal credit market provided more than one third of the total amount of loans to private enterprises during our sample period (Tang, 1995). It will be of great interest to study how the informal financial sector interacted with the formal financial sector in transmitting shocks to asset prices. Second, our sample is restrained due to the lack of consistently estimated real estate prices. Taiwan’s financial markets, however, have advanced rapidly since the early 1990s. A notable development is the increase of direct financing relative to indirect financing. A reasonable conjecture is that the availability of more sources of funds may lessen the monetary policy effect that directly affects the amount of bank loans on asset markets. It is important for both researchers and policymakers to identify the relative significance of different transmission channels along the evolution of the financial structure. Boyd and Gertler 1995Browne and Rosengren 1992Browne and Case 1992Gertler and Gilchrist 1994