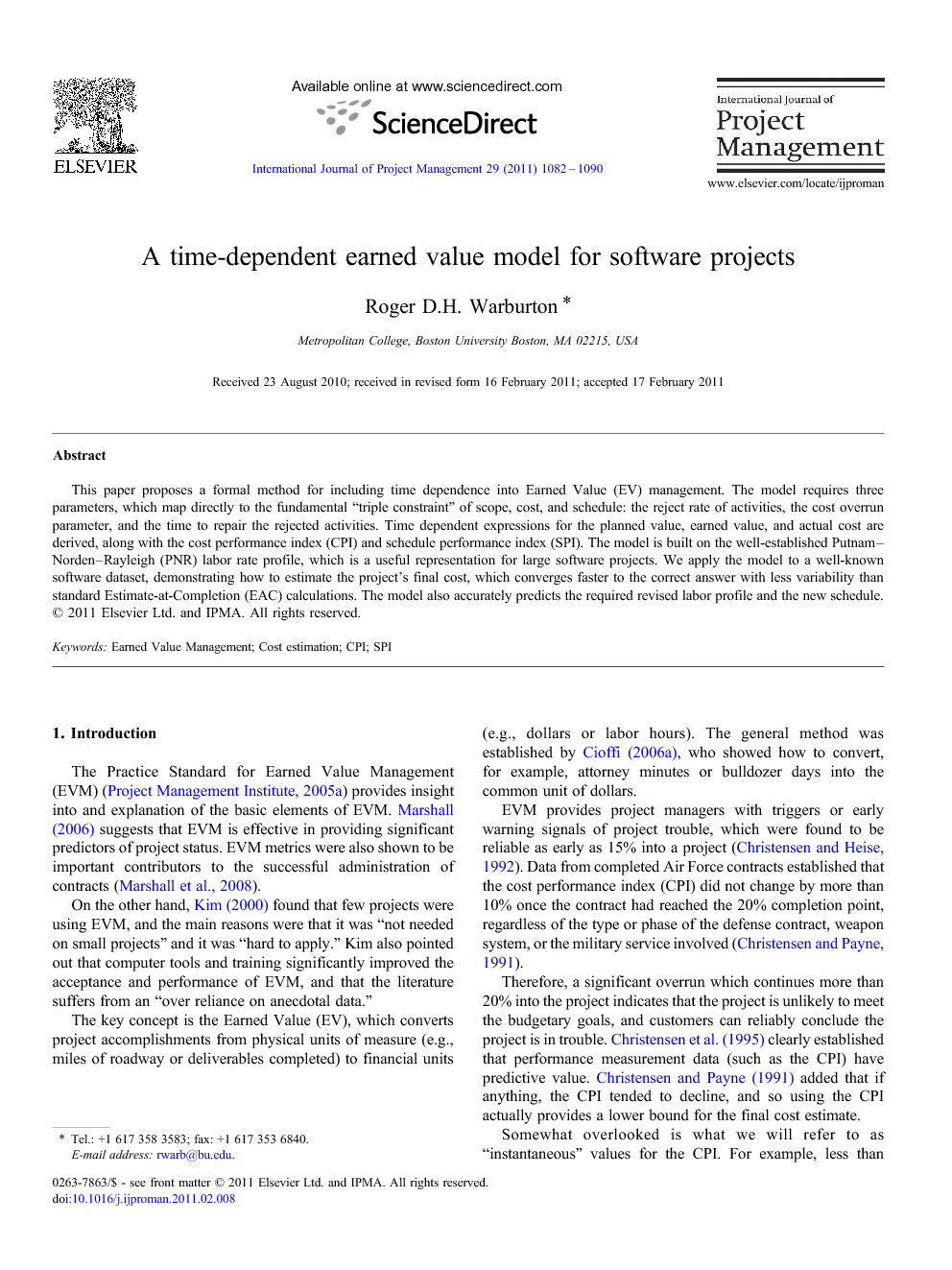 This paper proposes a formal method for including time dependence into Earned Value (EV) management. The model requires three parameters, which map directly to the fundamental “triple constraint” of scope, cost, and schedule: the reject rate of activities, the cost overrun parameter, and the time to repair the rejected activities. Time dependent expressions for the planned value, earned value, and actual cost are derived, along with the cost performance index (CPI) and schedule performance index (SPI). The model is built on the well-established Putnam–Norden–Rayleigh (PNR) labor rate profile, which is a useful representation for large software projects. We apply the model to a well-known software dataset, demonstrating how to estimate the project's final cost, which converges faster to the correct answer with less variability than standard Estimate-at-Completion (EAC) calculations. The model also accurately predicts the required revised labor profile and the new schedule.

The Practice Standard for Earned Value Management (EVM) (Project Management Institute, 2005a) provides insight into and explanation of the basic elements of EVM. Marshall (2006) suggests that EVM is effective in providing significant predictors of project status. EVM metrics were also shown to be important contributors to the successful administration of contracts (Marshall et al., 2008). On the other hand, Kim (2000) found that few projects were using EVM, and the main reasons were that it was “not needed on small projects” and it was “hard to apply.” Kim also pointed out that computer tools and training significantly improved the acceptance and performance of EVM, and that the literature suffers from an “over reliance on anecdotal data.” The key concept is the Earned Value (EV), which converts project accomplishments from physical units of measure (e.g., miles of roadway or deliverables completed) to financial units (e.g., dollars or labor hours). The general method was established by Cioffi (2006a), who showed how to convert, for example, attorney minutes or bulldozer days into the common unit of dollars. EVM provides project managers with triggers or early warning signals of project trouble, which were found to be reliable as early as 15% into a project (Christensen and Heise, 1992). Data from completed Air Force contracts established that the cost performance index (CPI) did not change by more than 10% once the contract had reached the 20% completion point, regardless of the type or phase of the defense contract, weapon system, or the military service involved (Christensen and Payne, 1991). Therefore, a significant overrun which continues more than 20% into the project indicates that the project is unlikely to meet the budgetary goals, and customers can reliably conclude the project is in trouble. Christensen et al. (1995) clearly established that performance measurement data (such as the CPI) have predictive value. Christensen and Payne (1991) added that if anything, the CPI tended to decline, and so using the CPI actually provides a lower bound for the final cost estimate.

A major challenge in project management is balancing the “triple constraint” of scope, cost, and schedule. We presented a model with three parameters, which map directly to the fundamental triple constraint: the reject rate, r, is a measure of the scope quality, as it characterizes the rate at which activities do not meet their designed objectives, and must be reworked. The cost overrun parameter, c, measures the cost to repair the rejected activities, and so maps directly to the project cost constraint. The time delay parameter, τ describes the time associated with repairing the rejected activities, and so maps directly to the project's schedule constraint. There are no extraneous or phenomenological parameters. We assumed that the parameters are constant over the life of the project. Industrial data strongly suggests that project error rates do indeed remain constant over time (McGarry et al., 1994), which suggests that the assumption that r is constant is reasonable. The Oxford English Dictionary appeared to follow the same ‘S’ curve for decades (Cioffi, 2006c), suggesting that its underlying project parameters were constant. Therefore, it seems a reasonable assumption that the model parameters are indeed constant. We assumed that the model parameters were all positive. The reject rate, r, is inherently positive. A positive value for c results in a cost overrun, but without change the model will work just as well if c is negative, representing a cost under run. However, the model will not work as presented for schedule accelerations (negative values of τ) because of the time delay terms, e.g., pv(t − τ). More research is required to determine if the model can be reformulated to include schedule accelerations. We have been unable to obtain project data on the average delay experienced by individual activities, so another topic for future research is to evaluate the reasonableness of the constant τ assumption by calibrating the model, and determining its range of applicability. By analyzing early project data, we demonstrated that project managers could easily estimate the values of the model's three parameters. Predictions of the final cost and schedule were then available, and allowing for noise in the data, these predictions were constant over the life of the project, an inherently useful property of a prediction. We conclude that the three parameters are in some sense fundamental, while quantities such as CPI and SPI are shown to be derived functions of time. The final cost prediction from the model appears to converge to the true value faster than standard EAC calculations. Also, the model predicts the new schedule and a revised labor profile, which can be used for staff planning. The model predicts the time dependence of the SPI(t), and further, the property that SPI(t) → 1 is an explicit property of the model. Project managers can measure SPI(t) over time and distinguish between inherent changes (those due to the time dependence of SPI(t)), and genuine changes in project performance, which are a result of significant managerial actions. Here, “significant actions” are those that actually reduce the reject rate, the cost overrun rate, and the time to repair. Without such significant actions, the project will simply follow its established path.