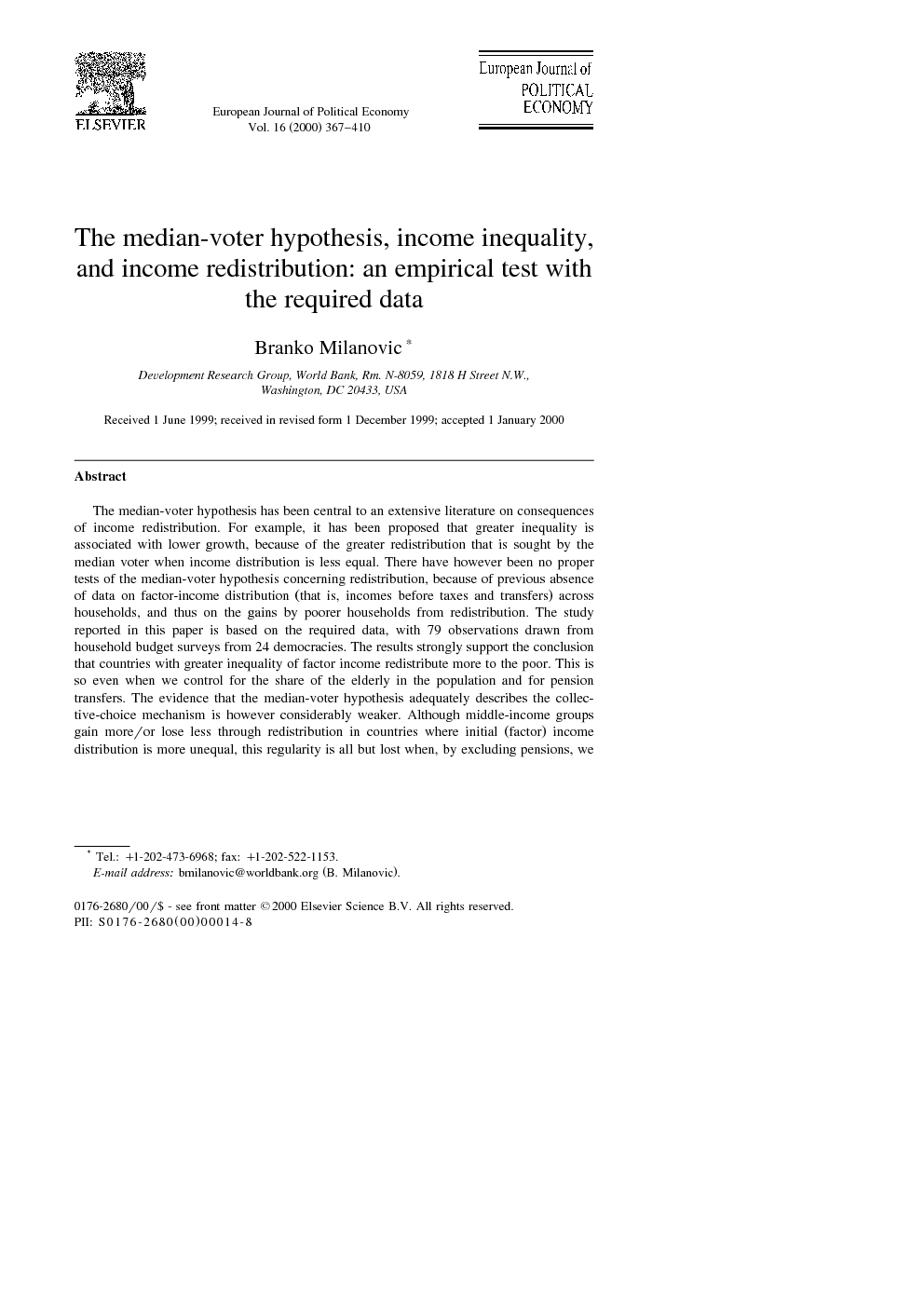 The median-voter hypothesis has been central to an extensive literature on consequences of income redistribution. For example, it has been proposed that greater inequality is associated with lower growth, because of the greater redistribution that is sought by the median voter when income distribution is less equal. There have however been no proper tests of the median-voter hypothesis concerning redistribution, because of previous absence of data on factor-income distribution (that is, incomes before taxes and transfers) across households, and thus on the gains by poorer households from redistribution. The study reported in this paper is based on the required data, with 79 observations drawn from household budget surveys from 24 democracies. The results strongly support the conclusion that countries with greater inequality of factor income redistribute more to the poor. This is so even when we control for the share of the elderly in the population and for pension transfers. The evidence that the median-voter hypothesis adequately describes the collective-choice mechanism is however considerably weaker. Although middle-income groups gain more/or lose less through redistribution in countries where initial (factor) income distribution is more unequal, this regularity is all but lost when, by excluding pensions, we look only at explicit redistributive social transfers from which middle classes contemporaneously gain little. This leaves us searching for an alternative explanation: do middle-classes gain from transfers in the long run even if not contemporaneously?; or is the median-voter hypothesis, based on direct democracy, a proper representation of the mechanisms of collective decision making in representative democracy?

The purpose of this study has been twofold: (1) to test the hypothesis of an inverse relationship between inequality in distribution of factor income and redistribution, and (2) to test one possible explanation for redistribution, the political collective-choice mechanism through the median-voter hypothesis. The approach taken in the paper is novel, in that, for the first time, both the median-voter hypothesis and the dependent and the independent variables in the redistribution equations are correctly specified. The dependent variable is the extent of redistribution — the income share gain of the lower half of income distribution according to factor income (“the poor”), or of the bottom quintile (“the very poor”), or the middle class (fifth and sixth decile). The independent variable is the inequality of factor incomes or the position of the middle class in factor-income distribution. Neither of these two variables was used in previous research, because they have not been readily available. The data used here are for a sample of 24 countries, with a total of 79 observations. The results show strong support for the redistribution hypothesis. More unequal factor-income countries redistribute more toward the poor and very poor. A country A with exactly the mean characteristics of the sample would have a factor Gini coefficient of 46.3, and the bottom half of its population (“the poor”) would receive 19.4% of the total factor income. When we move to disposable income distribution, that is, include all government cash transfers and personal taxes, the same average country would have a Gini of 32.2, and the samepeople would have increased their share to 32.1% of the total disposable income. The poor will therefore have gained a 12.7 percentage point share. Consider another country B, more unequal in terms of its factor-income distribution. Let the poor's factor-income share be 1 point less than their share in country A. Now, the redistribution in a more unequal country would be greater and the sharegain for the poor in country B would reach 13.7 percentage points, exactly 1 point more than in country A. The poor in both countries would therefore end up with the same share of disposable income. For the very poor (the bottom quintile), redistribution is even stronger making their position in terms of disposable income share negatively related to their starting position (factor-income share). The effects of redistribution become more muted when pensions are taken out of transfers and treated as factor income. The negative sign between the poor's share in factor income and share gain persists, and the coefficient remains statistically highly significant throughout, but is much smaller. Now, redistribution compensates for only 70% of the poor's initial shortfall in a more unequal country (i.e. the poor in country B will no longer be able to “catch up”, in terms of disposable income, with the poor in country A), and for a little over 90% of the very poor's shortfall. While the evidence supports the link between the extent of pro-poor redistribution and factor-income inequality, the evidence that redistribution takes place through the median voter channel is much weaker. The data — based on cash transfers only — do not allow us to conclude that the middle class is a net beneficiary of redistribution. Comparing cash transfers and taxes only, the middle-income groups appear invariably to be losers. However, it is likely that, if we included transfers in kind, the middle classes may turn out to be net beneficiaries. When we test a weaker formulation of the median voter hypothesis — namely that lower factor-income shares of the middle class are associated with a greater share gain — we find that the relation holds when pensions are included among cash transfers. When pensions are excluded, there is much less evidence that the middle classes starting from a less favorable factor income position redistribute more in their own favor. The median voter hypothesis thus fails when we focus on the truly redistributive transfers. The middle classes contemporaneously gain little from these transfers. This leaves us looking for explanations. First, since those poorer than the middle classes contemporaneously gain, perhaps the decisive voter is at a level income lower than the median? This seems implausible. Recent research has, if anything, moved in the direction of the conclusion that the decisive voter at a level higher than the median (see Bassett et al., 1999). Second, the absence of contemporaneous middle-class gain may mask a long-run middle-class gain from redistributive programs. Those currently in the middle class may not profit from current social transfers. They may, however, be willing to finance the transfers as insurance for themselves (they for example, receive transfers if they become unemployed). Third, and most problematically for previous studies, the median-voter hypothesis may not be the appropriate collective-decision making mechanism to explain redistribution decisions. The median-voter hypothesis is based on direct voting. Other than in Switzerland (and in various degrees amongst cantons; see Feld and Kirchgässner 2000), collective decisions are made with institutions of representative democracy rather than direct democracy. Since direct voting does not take place on every issue, the median-voter hypothesis applied to voters does not describe the collective decision-making rule. There is therefore a question whether, and to which extent, policy outcomes for an issue under representative democracy reflect the preferences of the median voter. The results that are reported in this paper suggest broad-ranging outcomes where the institutions of representative democracy do not result in the redistribution that would be sought by the median voter.