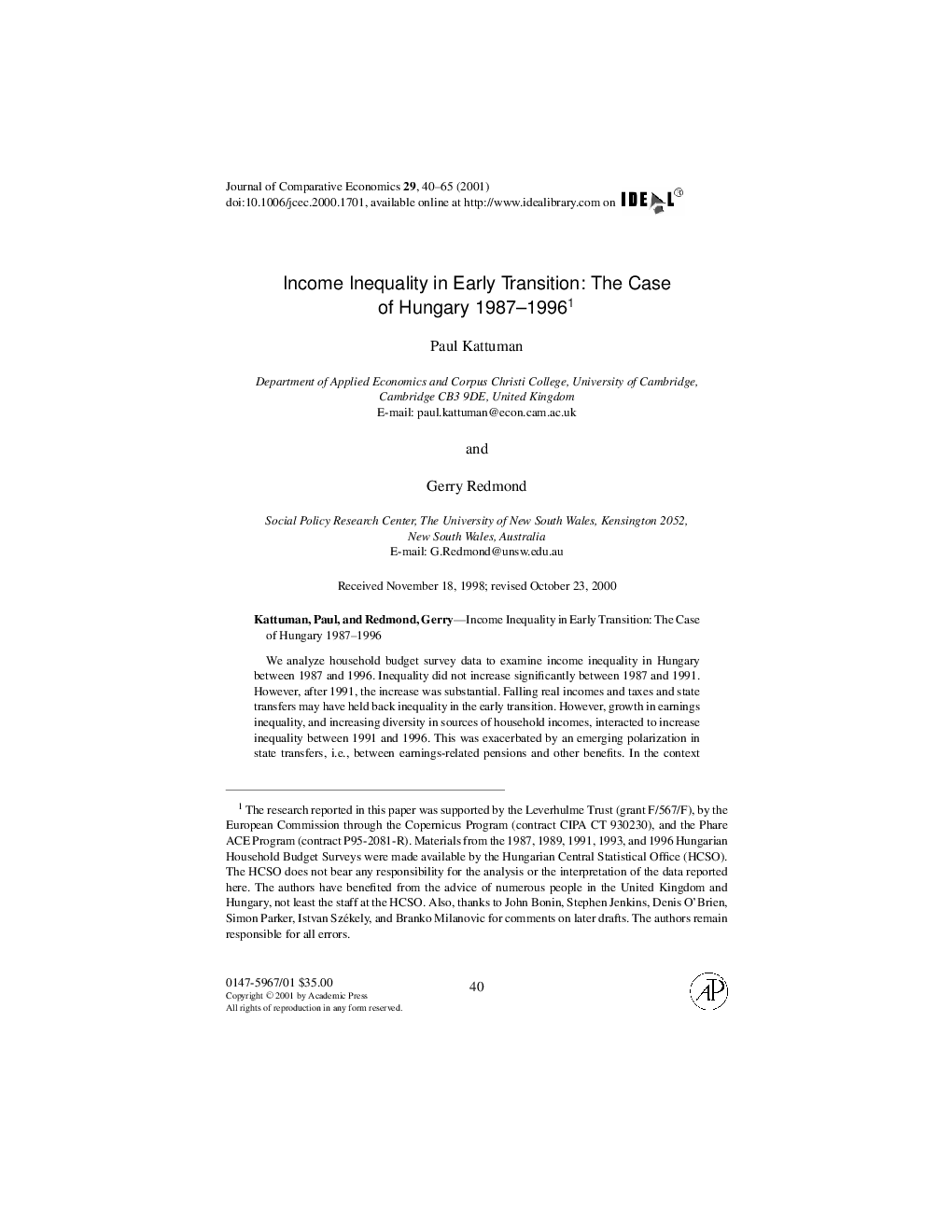 We analyze household budget survey data to examine income inequality in Hungary between 1987 and 1996. Inequality did not increase significantly between 1987 and 1991. However, after 1991, the increase was substantial. Falling real incomes and taxes and state transfers may have held back inequality in the early transition. However, growth in earnings inequality, and increasing diversity in sources of household incomes, interacted to increase inequality between 1991 and 1996. This was exacerbated by an emerging polarization in state transfers, i.e., between earnings-related pensions and other benefits. In the context of sustained economic growth, the increase in inequality could accelerate. J. Comp. Econ., March 2001 29(1), pp. 40–65. Department of Applied Economics and Corpus Christi College, University of Cambridge, Cambridge CB3 9DE, United Kingdom; Social Policy Research Center, The University of New South Wales, Kensington 2052, New South Wales, Australia. Copyright 2001 Academic Press.

It was widely anticipated that post-Communist economies would experience greater income inequality over the period of their transformation into market economies. Increased dispersion of market incomes was seen as a principal driving force in the transition process; incentives bloom when workers who invest in skills are able to command a market wage and people who invest in assets are able to realize a market income from them (Barr, 1994). Measurements reported in an emerging literature on inequality in transition suggest that it has indeed increased (F ̈ orster and T ́ oth, 1998; Milanovic, 1998; Flemming and Micklewright, 1999). As well as measuring changes in inequality, analysts have also begun to attempt to explain the factors that have driven these changes (Milanovic, 1999). Our paper contributes to this body of knowledge by focusing on Hungary in the years 1987 to 1996. Our main sources of information are Hungarian Household Budget Survey microdata for the years 1987, 1989, 1991, 1993, and 1996. Using these data, we measure and decompose household income inequality to gain a fuller picture of the principal forces that drove increased inequality through the early transition years in Hungary. Our analysis builds on the work of Jenkins (1996); we compare his analysis of the growth in inequality in the UK over the 1980s with the growth in inequality in Hungary in the 1990s. Our work also builds on that of Milanovic (1999), who argues that increased household income inequality in Central and Eastern Europe over the early transition years was driven largely by greater inequality in the earnings of employees. Our analysis supports that of Milanovic,but with some important nuances. With reference to changes in overall inequality, we cannot find any conclusive evidence that household income inequality increased between 1987 and 1991; indeed, it may even have fallen. After 1991, inequality certainly grew, although most of the growth appears to have taken place between 1991 and 1993, with little growth between 1993 and 1996. Regarding the evolution of components driving inequality between 1987 and 1996, we report three major findings. First,the contribution of employee earnings to household income inequality peaked in 1989 and 1991 when inequality was stable or falling. Our analysis shows that, as the importance of employee earnings declined after 1991, greater diversity in income sources began to play a more prominent role in generating inequality in Hungary.Second, we suggest that the institution of a progressive personal income tax regime in the late 1980’s moderated the growth in inequality in Hungary, at leas up to 1991; after 1991, the redistributive efficacy of the income tax regime declined.Third, we argue that social security programs, which generally had the effect of reducing inequality in the late 1980’s, had evolved by 1996 so that two different sets of programs, welfare benefits for families and the unemployed on the one hand and pensions on the other, were playing contradictory roles in terms of their influence on the distribution of incomes in post-Communist Hungary. These three factors seem likely to dictate the pattern of inequality growth in Hungary for some time to come.There are five further sections in this paper. In Section 2, we summarize the economic and policy background to the changes in income distribution in Hungary.Section 3 describes the data we use. The pattern of change in inequality in Hungary is presented in Section 4 and examined through decompositions in Section 5.Section 6 concludes.

In our examination of inequality in Hungary over the early transition years,we found that most of the changes in the income distribution occurred at the low and high income tails. Between 1987 and 1991, we cannot say for certain whether inequality increased at all; our data suggest that it did not and there are plausible arguments to be made as to why this might be the case. Earnings inequality did increase, but so did the efficacy of income taxes and the importance of state transfers, while income diversity as a whole did not increase greatly. The three keys to increased inequality after 1991 were, first, increased income diversity, second, the decreased efficacy of taxation, and third, a hollowing out of the state transfer system with mostly earnings-related pensions on one side and increasingly means-tested welfare on the other. Therefore, state policies clearly played an important role in determining the change in income dispersion in the early transition years. Income taxes, which were first introduced in 1988, were generally progressive and redistributive. However, as the importance of employee earnings declined and income from sources other than earnings became more prominent, the redistributive powers of taxes declined. This problem was exacerbated by government decisions to cut top tax rates before they began to increase again under the weight of the growing fiscal crisis in the mid-1990’s. The importance of state transfers as a proportion of household income increased over time, again until 1996, when widespread means-testing was introduced. For most households, state transfers constituted an important source of income. However, over time, the benefit recipients became polarized between mostly earnings-related pensioners, on the one hand, and means-tested welfare recipients, on the other, mirroring what Milanovic (1999) describes as the hollowing out of the earnings distribution. These three factors suggest that, by 1996, the first phase of transition in Hungary, characterized by a high level of government intervention, was passing and a new phase, characterized by a more concerted withdrawal of redistributive public policies, had begun.Subsequent changes in tax rates and welfare provisions would tend to confirm this view. As Hungary finally begins to enjoy sustained economic growth (OECD, 1999), we may conjecture that the dispersion in market incomes and the hitherto muted degree of polarization between earners and welfare recipients will begin to accelerate.