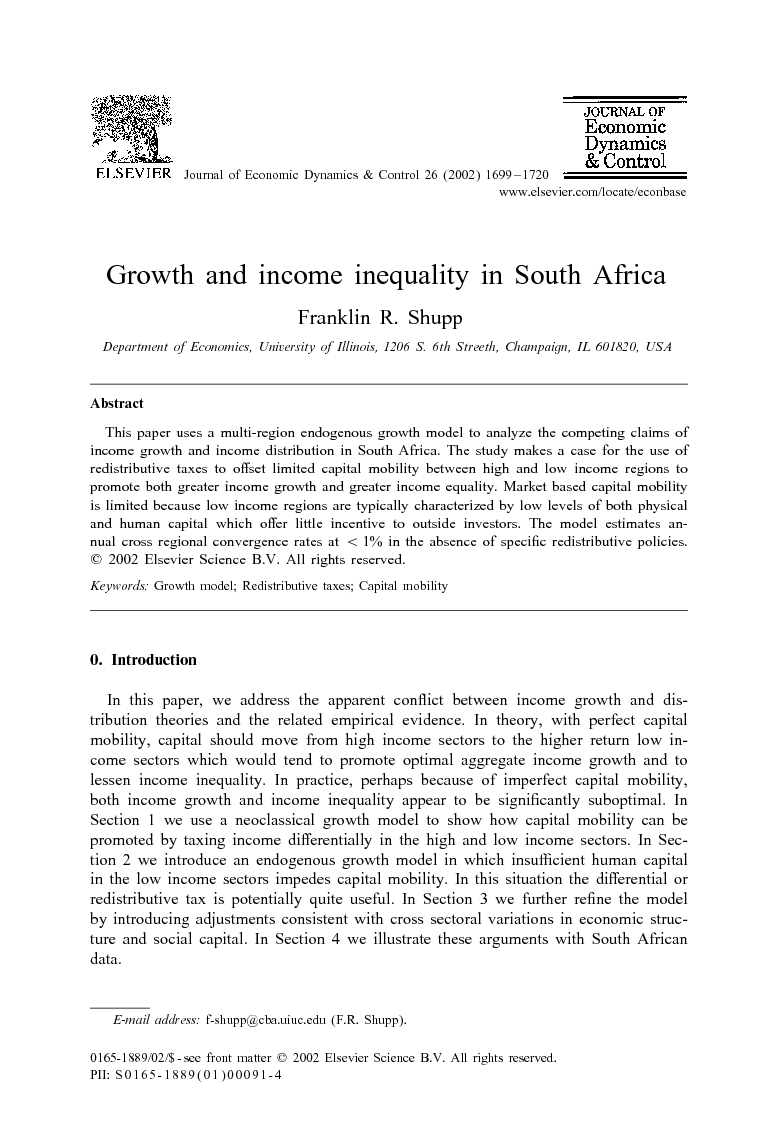 This paper uses a multi-region endogenous growth model to analyze the competing claims of income growth and income distribution in South Africa. The study makes a case for the use of redistributive taxes to offset limited capital mobility between high and low income regions to promote both greater income growth and greater income equality. Market based capital mobility is limited because low income regions are typically characterized by low levels of both physical and human capital which offer little incentive to outside investors. The model estimates annual cross regional convergence rates at <1% in the absence of specific redistributive policies.

Endogenous growth theory with its emphasis on human capital implies a slower rate of reduction in income inequality than that implied by the older neoclassical growth theory. Indeed cross country studies using the new or endogenous growth model typically find an annual convergence rate for per capital income of only 2% compared with an average rate of 6% found in studies using the Solow model (see, e.g., Jones, 1997). The slower convergence in the endogenous growth model derives from the argument that low income regions are typically characterized by low levels of both human and physical capital, and consequently lack the excess rates of return needed to attract high rates of capital investment. The 1% annual rate of convergence in per capita income across South African provinces estimated above for the period 1979–1994 in the first set of regressions presented is obviously somewhat <2% figure found in studies of other countries using endogenous growth theory. However a second set of regressions measuring convergence for income per worker did find the more common 2% convergence rate. These different findings for income per capita and income per worker dramatize the critical role played by employment in reducing income inequality in South Africa. Moreover, the promise implicit in the 2% convergence rate found for income per worker is itself severely compromised for two reasons. First, technology driven structural change creates a demand for ever higher skill levels which makes increasing employment very difficult without a corresponding increase in the supply of human capital. Second, the same changes in structure or technology which create a demand for a more skilled labor force also raise the relative rewards for those skills. This increases inequality rather than decreasing it. Indeed when the structural change argument is introduced into the second set of regressions, (see particularly regressions B.2 and B.4) estimated annual income convergence falls back towards 1%. The finding that technology driven structural change tends to slow convergence, i.e., to increase inequality is consistent with studies by Katz and Murphy (1992), Topel (1997) and Heckman (1998). These studies show that earnings inequality between skilled (university graduates) and unskilled (high school graduates) workers in the US increased by more than 2% annually over the last 25 years17 while the conclusions of the American studies are not directly transferable to South Africa,18 the implication is clear. Further reductions in income inequality will probably require in increase in the ratio of skilled to unskilled workers. If, as assumed above, skill can be proxied by formal education, this implies a substantial increase in average educational attainment. Furthermore, this increase must be achieved in the face of a significant emigration of the skilled (largely white) and an even more significant immigration of the unskilled (largely African). If instead skilled and unskilled labor are proxied by formal and informal employment, respectively, the dimension of the problem confronting South Africa becomes even more transparent. Put simply. Not only must the aggregate employment rate be increased, but the recent decline in the formal/informal employment ratio must be reversed. Otherwise even the modest reduction in income inequality found for the period 1979–1994 is unlikely to be sustained. In summary, the principal strength of the new or endogenous growth theory for studying income inequality is that it affords a direct measurement of the rate of income convergence. In this paper, we measured income convergence across regions (provinces), but the model can also be used to measure convergence across population groups, industrial sectors, gender, and/or age cohorts, given of course the relevant data. In theory, the model can also be used to measure the impact of capital redistribution policies. There are two qualification to this usage. First, the model implies that any imposed redistribution of either physical or human capital will be offset by an equal reduction in market induced capital formation, unless these policies are coupled with a corresponding redistribution of income. This conclusion, a consequence of the life cycle utility maximization assumption, appears to many to be overly strong. Second, there is little data to test the model since while many redistribution policies have been proposed, few have been thus far implemented. The endogenous growth model can also be used to measure the impact of income inequality on aggregate growth. Unfortunately, as noted in the previous section, the required income inequality time series data are not yet available for South Africa. The most serious limitation of the endogenous growth model employed is that it does not confront the unemployment question directly. As with most growth models, full employment is implicitly assumed. Consequently the unemployment question can only be addressed indirectly by comparing the separate estimates of the per capita income and per worker income regressions. A second limitation is that this full employment assumption together with the standard competitive market and life cycle utility maximization assumptions imply that any observed income convergence derives exclusively from technology spillovers. Relaxing these last two assumptions permits different marginal products of capital across sectors even in the absence of any spillover. These differences can also drive income convergence. Any combination of these assumptions leads to essentially the same regression equation, and consequently yields the same estimate of the convergence rate. The problem therefore is not with the estimate itself, but in trying to determine how much of the measured convergence is attributable to technological spillover from high income sectors, how much is attributable to the higher marginal product of capital (ex spillover) in low income sectors, how much is attributable to institutional constraints on capital mobility, and/or how much is attributable to purely stochastic factors. Appropriate policy responses are obviously sensitive to the answers to these questions.19 These and other limitations aside, the model framework presented here provides useful and measurable insights which can be readily related to ongoing growth and income distribution studies in South Africa.