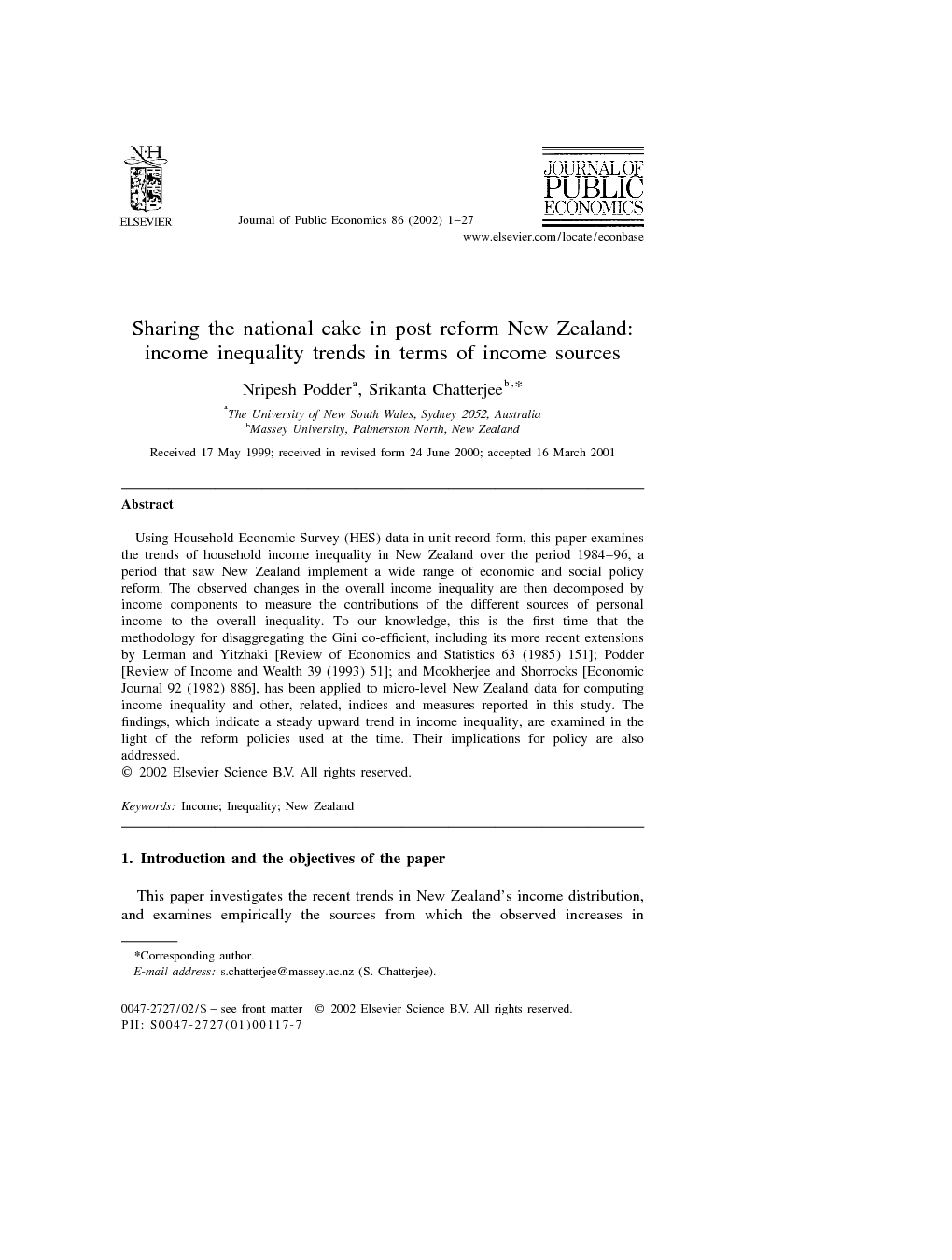 Using Household Economic Survey (HES) data in unit record form, this paper examines the trends of household income inequality in New Zealand over the period 1984–96, a period that saw New Zealand implement a wide range of economic and social policy reform. The observed changes in the overall income inequality are then decomposed by income components to measure the contributions of the different sources of personal income to the overall inequality. To our knowledge, this is the first time that the methodology for disaggregating the Gini co-efficient, including its more recent extensions by Lerman and Yitzhaki [Review of Economics and Statistics 63 (1985) 151]; Podder [Review of Income and Wealth 39 (1993) 51]; and Mookherjee and Shorrocks [Economic Journal 92 (1982) 886], has been applied to micro-level New Zealand data for computing income inequality and other, related, indices and measures reported in this study. The findings, which indicate a steady upward trend in income inequality, are examined in the light of the reform policies used at the time. Their implications for policy are also addressed.

This paper has applied a new, and more sophisticated, technique to New Zealand household income data to examine how household income distribution has altered over the period 1983/84 through to 1995/96, using unit record data from three surveys. The use of the data at this level of detail by researchers outside Statistics New Zealand, 1999, Statistics New Zealand, 1996, Statistics New Zealand, 1994 and Statistics New Zealand, 1984, 1992 has never been possible (permitted) before. The findings of this paper, therefore, throw new light on several aspects of household income distribution in New Zealand over a period when the economy was subjected to an extensive reform process. The findings document that income inequality has increased sharply over the period, confirming the findings of some other researchers (Joseph Rowntree Foundation, 1995 and Saunders, 1994). While it is difficult to connect directly the economic reform measures used in New Zealand with the observed deterioration in inequality, the possible channels through which policy-induced changes in the economy might have been transmitted to the distribution of the ‘national cake’ can be, and have been, identified in this paper. The sharp increase in unemployment over the latter part of the 1980s and early 1990s while, again, not a direct cause of increased inequality, has certainly contributed to the process. Likewise, the distortions in the financial markets, which saw the nominal interest rates soar to unprecedented levels in the later 1980s and early 1990s, resulted in changes to household incomes in a way that, again, contributed to the increased inequality. Interestingly too, whatever the positive outcome of the changes in the tax-expenditure policies over the period of the reform, they contributed to increased income inequality. More significantly, perhaps, the drastic cuts in the welfare benefits put in place in 1991 despite being directed towards the poor somewhat better, failed to stem the tide of rising overall inequality because of the inadequacy of the transfers. The somewhat more stringent eligibility requirement for New Zealand superannuation, likewise, helped minimise the equalising impact of this component of income. It should also be remembered that the deregulation process in New Zealand coincided with the structural changes taking place in many other economies. The structural changes, influenced by the information revolution, have increased the demand for highly-skilled (high-wage) labour in a disproportionate manner. As a result, the inequality of earnings has increased sharply in many Western economies. Evidence on this is scanty for New Zealand, but some indirect indicators cited earlier do point to at least a possibility that skilled labour has gained in the course of the reform period. But, whatever the reasons, it is indeed a spectacular, if somewhat ironic, finding of this paper that the bottom 80% of New Zealand income recipients suffered a reduction in their share of the total incomes paid out, while the top 5% enjoyed a 25% gain after 12 years of painful restructuring. The share of the top 10% steadily increased to exceed that of the bottom half of the income-earned by 1996. There are, no doubt, other aspects of the story of New Zealand’s household income distribution that need addressing. The policy implications stemming from the findings also need careful examination. Meanwhile, the verdict on how well-off New Zealanders are after all the recent economic changes must remain an open issue.