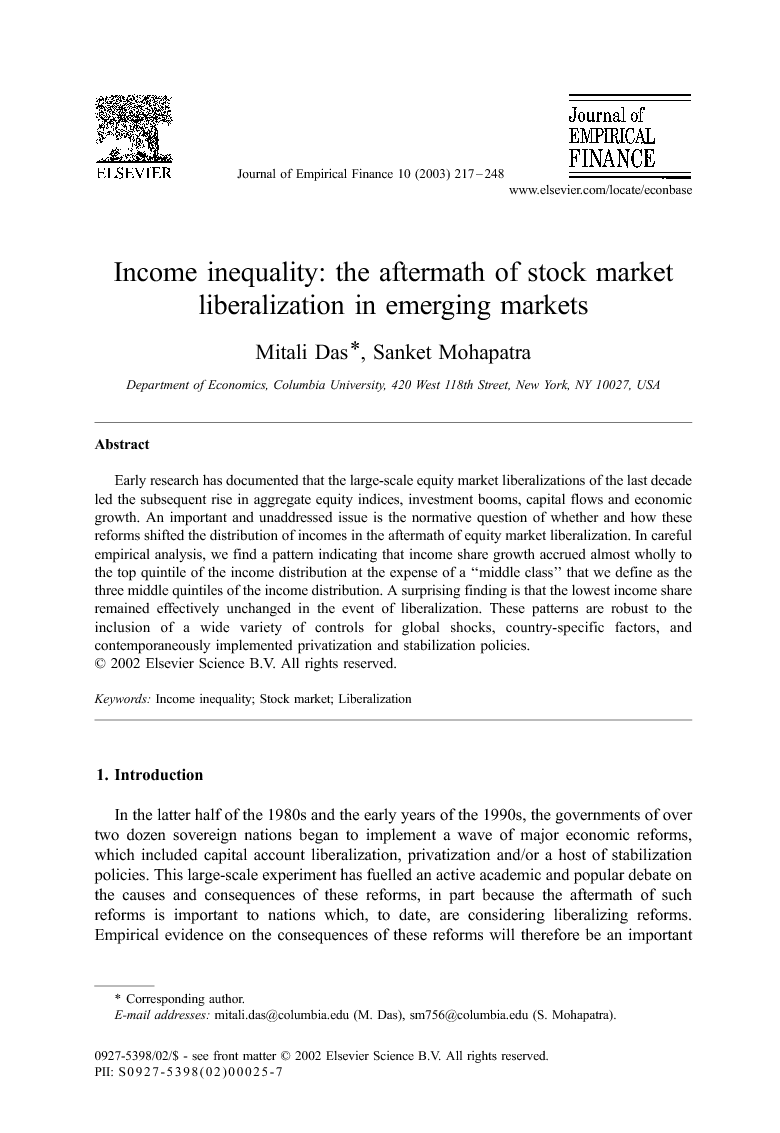 Early research has documented that the large-scale equity market liberalizations of the last decade led the subsequent rise in aggregate equity indices, investment booms, capital flows and economic growth. An important and unaddressed issue is the normative question of whether and how these reforms shifted the distribution of incomes in the aftermath of equity market liberalization. In careful empirical analysis, we find a pattern indicating that income share growth accrued almost wholly to the top quintile of the income distribution at the expense of a “middle class” that we define as the three middle quintiles of the income distribution. A surprising finding is that the lowest income share remained effectively unchanged in the event of liberalization. These patterns are robust to the inclusion of a wide variety of controls for global shocks, country-specific factors, and contemporaneously implemented privatization and stabilization policies.

This paper presents evidence of a strong statistical association between the event of liberalization and income shares. The data strongly support a positive coefficient between liberalization and the highest income quintile's share of mean income, and a negative coefficient between liberalization and the middle class income share. For our study, the middle class represents the aggregate sum of the three middle quintiles. We find no evidence of any statistical association between liberalization and the lowest income quintile. Although the middle class “suffers” in the wake of a liberalizing reform while the upper quintile gains, this statement is true for income shares. We find that income levels in liberalizing nations almost universally rise after liberalization. We provide tests of stochastic dominance of the pre- and post-liberalization income distributions to complement our regression analysis. The patterns we describe persist in the presence of a wide variety of controls for domestic fundamentals, world business cycle movements and country-specific factors. They are also robust to the addition of controls for contemporaneous domestic reforms. We find that equity revaluations affect income shares differentially before and after liberalizations. They also affect income shares differentially across liberalizing and non-liberalizing nations. Because liberalizing and other major domestic reforms are rarely implemented in a vacuum, we do not press on causality. It is possible that endogenous policy decisions will attenuate some of the aforementioned correlations that we document. However, it is important to note that there are mechanisms which should relate capital market liberalizations to income shares under a wide variety of hypotheses that are true in emerging markets (e.g., differential access to credit markets, limited stock market participation, and the tight links between upper quintiles and policy makers). In any event, the patterns we describe should prove useful in the debate on emerging markets phenomena, and add to the research that analyzes the aftermath of capital account liberalization in emerging markets.