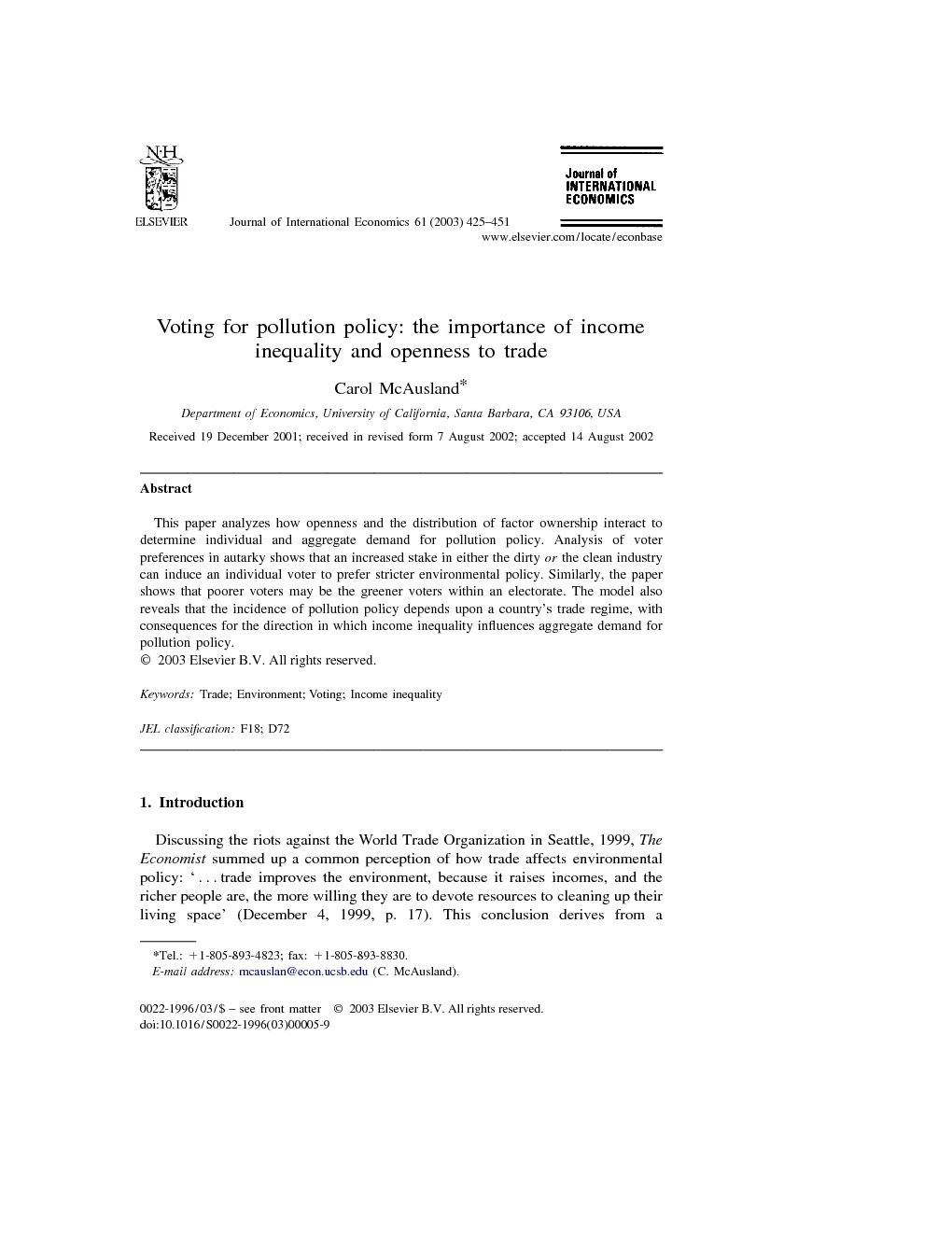 This paper analyzes how openness and the distribution of factor ownership interact to determine individual and aggregate demand for pollution policy. Analysis of voter preferences in autarky shows that an increased stake in either the dirty or the clean industry can induce an individual voter to prefer stricter environmental policy. Similarly, the paper shows that poorer voters may be the greener voters within an electorate. The model also reveals that the incidence of pollution policy depends upon a country’s trade regime, with consequences for the direction in which income inequality influences aggregate demand for pollution policy.

This paper analyzes how openness and the distribution of factor ownership interact to determine individual and aggregate demand for pollution policy. It shows that, in autarky, a voter may prefer weaker environmental policy as her stake in either the dirty or clean industry increases. In the former case, a voter’s preference changes because she bears a larger share of the direct costs of pollution abatement: foregone output. But in the latter case an individual bears a larger share of the indirect costs of pollution regulation: high relative prices for dirty goods and so a worse rate of exchange for any clean goods an individual wants to trade with the rest of the economy. Acting in the opposite direction is an income effect. As a voter gets a larger share of the economy’s productive resources her income rises and so then will her demand for environmental quality. This paper shows that whether this income effect dominates depends on the elasticity of the marginal rate of substitution between private consumption and the environmental public good; if this elasticity is not sufficiently large then either one or both of the endowments or individual terms of trade effects will dominate and a greater ownership share in either industry can make a voter want stricter environmental policy. The paper also reveals an incentive for individuals with relatively small holdings of the economy’s income to prefer stricter environmental policies than do those who are richer. This possibility arises from the differences in the opportunity costs of pollution abatement across individuals according to their endowments of the polluting good, in contrast to the uniformity of the benefits from abatement. Whether poorer voters are the greener voters within an electorate is shown to depend again on the elasticity of the marginal rate of substitution between private goods and environmental quality—in particular on whether this elasticity is less than unity. Regarding comparisons of preferences and policy in autarky and the small open economy, the paper shows that openness to trade at fixed world prices releases some voters from the general equilibrium consequences of pollution policy, and hence induces a change in the manner in which an individual ranks levels of stringency of a pollution standard. One consequence of this is the possibility that openness to trade with a higher world price for the polluting good (relative to autarky) leads to qualitatively opposite responses when policy is set by a representative agent as compared to by majority rule: a representative agent will loosen pollution policy, while it may instead be tightened under majority rule. This has important consequences for the validity of predictions regarding pollution policy that rely on assumptions of representative agents or social planners, particularly if we believe that pollution policy is set in a political arena. More generally, this analysis also suggests that variations across countries in their patterns of factor ownership, or even the mechanisms by which pollution policies are set, can serve as a basis for trade. And finally, the paper offers predictions as to the manner in which income inequality affects electoral demand for stringency in local environmental policy. The paper shows that income inequality not only creates differences in this aggregate demand, but the direction of its influence depends on both the extent to which openness insulates the local economy from the price effects of its pollution policy, and on the underlying source of the income inequality itself.