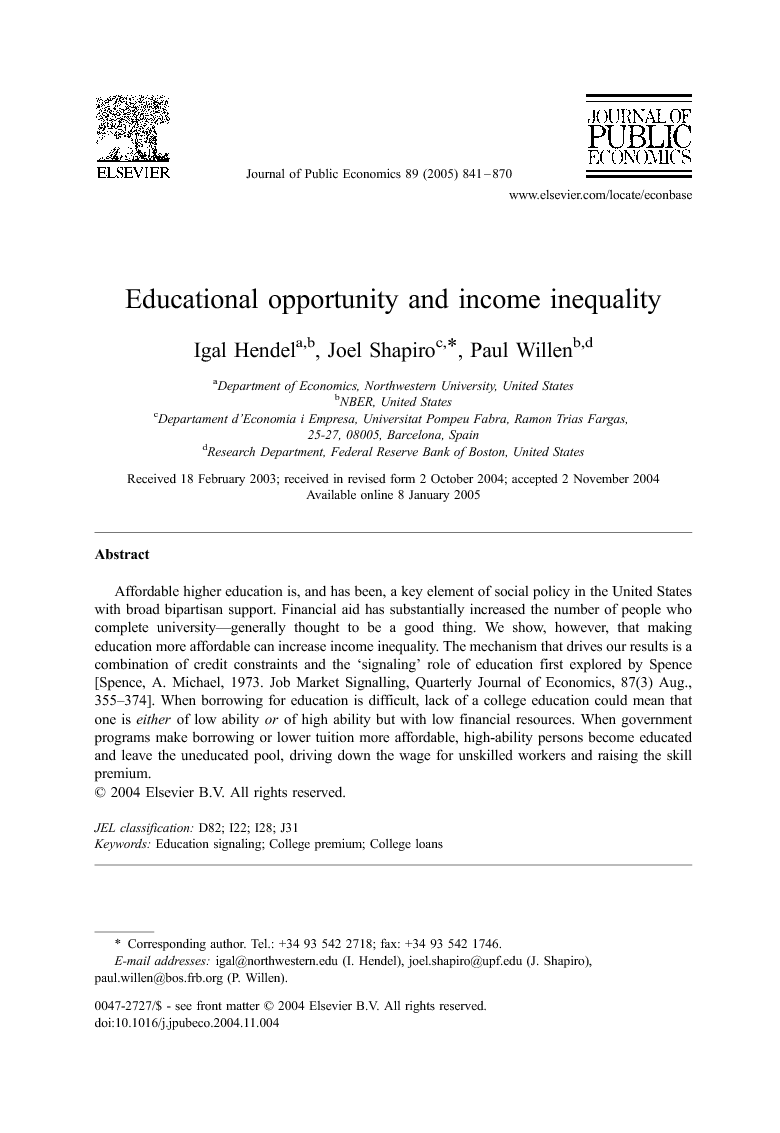 Affordable higher education is, and has been, a key element of social policy in the United States with broad bipartisan support. Financial aid has substantially increased the number of people who complete university—generally thought to be a good thing. We show, however, that making education more affordable can increase income inequality. The mechanism that drives our results is a combination of credit constraints and the ‘signaling’ role of education first explored by Spence [Spence, A. Michael, 1973. Job Market Signalling, Quarterly Journal of Economics, 87(3) Aug., 355–374]. When borrowing for education is difficult, lack of a college education could mean that one is either of low ability or of high ability but with low financial resources. When government programs make borrowing or lower tuition more affordable, high-ability persons become educated and leave the uneducated pool, driving down the wage for unskilled workers and raising the skill premium.

In this paper, we argue that reducing financial constraints for postsecondary education can increase wage inequality. We use a dynamic approach based on job market signaling, a mechanism that has been unexplored in recent work on wage inequality. A reduction in the interest rate increases the number of the poor who get educated in steady state, lowering the average ability of the uneducated pool, and therefore increasing the wage gap. In the last 60 years, two events (the G.I. Bill and the Higher Education Act) significantly reduced the cost of higher education, while many subsequent acts have further increased its overall accessibility. Our work suggests two natural directions for future research. First, researchers have identified many factors that, in theory, might affect the relationship between wages and education. One natural question to ask is how these other factors interact with the mechanism we have described here. Second, while we have provided some stylized facts that are consistent with the ideas in this paper, formal empirical tests can provide evidence on how changing financial opportunities have affected wage inequality.