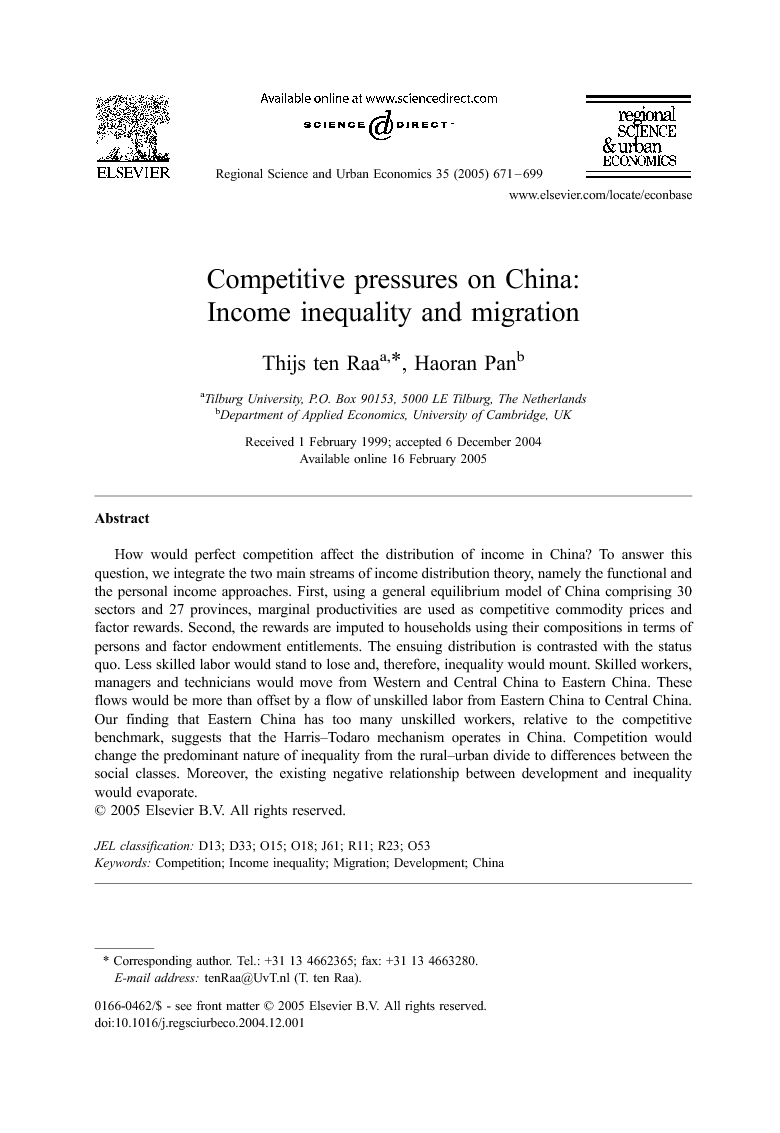 How would perfect competition affect the distribution of income in China? To answer this question, we integrate the two main streams of income distribution theory, namely the functional and the personal income approaches. First, using a general equilibrium model of China comprising 30 sectors and 27 provinces, marginal productivities are used as competitive commodity prices and factor rewards. Second, the rewards are imputed to households using their compositions in terms of persons and factor endowment entitlements. The ensuing distribution is contrasted with the status quo. Less skilled labor would stand to lose and, therefore, inequality would mount. Skilled workers, managers and technicians would move from Western and Central China to Eastern China. These flows would be more than offset by a flow of unskilled labor from Eastern China to Central China. Our finding that Eastern China has too many unskilled workers, relative to the competitive benchmark, suggests that the Harris–Todaro mechanism operates in China. Competition would change the predominant nature of inequality from the rural–urban divide to differences between the social classes. Moreover, the existing negative relationship between development and inequality would evaporate.

There are two strands in the theory and measurement of income distribution. Economists focus on the functional distribution of income, using the concept of factor productivity. Their standard model features a macro-economic production function that maps factor inputs, such as labor and capital, into national income. The factors are rewarded according to their marginal products. Scarce factors fetch a high price. Inequality issues are implicit. Basically, when labor is abundant, relative to capital, the wage rate will be low and, therefore, inequality is expected to be high. In the other “camp,” statisticians focus on the personal distribution of income, with emphasis on the measurement of income and inequality. They consider personal income as given and analyze it directly, without the need of a production function. In this paper, however, we are not only interested in the actual distribution of income in an economy that becomes more market oriented, but also in the distribution that would ensue under the benchmark of perfect competition. This issue suggests a two-step program. In the first step we find the marginal productivities of the factor inputs, since they determine the factor incomes under perfect competition. In the second step we reset the factor components of household incomes and reevaluate the distribution of the latter. The first step requires a general equilibrium model to determine the shadow prices of the factor inputs, while the second step requires detailed statistical information to express the rewards of factor inputs, such as the different types of labor, in terms of personal and family incomes. This integration of the functional and personal income analytic approaches seems to be novel. We extend the model of ten Raa and Mohnen (2001) to an economy of many regions; we refer to the references given there for a review of the applied general equilibrium literature. The model comprises 30 input–output sectors, grouped in agriculture, mining, manufacturing, construction and other services. The standard convexity assumptions are fulfilled, so that the welfare theorems hold and, therefore, a scan of the interprovincial utility frontier and an evaluation of the balance of payments can be used to determine equilibrium (Negishi, 1960). More precisely, we let each province generate a domestic final demand vector (with the observed commodity proportions, assuming Leontief preferences), but multiplied by a (provincial) expansion factor. We scan in each direction in the space of provincial expansion factors by maximizing domestic final demand subject to the national material balances for the tradable commodities, the provincial material balances for the non-tradable commodities, and the factor constraints for the various types of labor and capital. The shadow prices of the tradable commodities codetermine the provincial trade balances, which are used to adjust the relative weights of the provincial expansion factors, until a full balance of payments is achieved. We follow the usual assumption that agriculture, mining and manufacturing produce tradable commodities and that construction and the other services produce non-tradable commodities. China is perhaps the most dramatic example of a transition to a market economy. Not only is central planning replaced by entrepreneurship, trade liberalized, and are millions of workers on the move, but what makes China particularly fascinating for a case study, is its starting point of egalitarianism. The opening up to free markets of a right-wing dictatorship, is interesting from the view point of efficiency gains, which overwhelm distributional issues. In China, however, there are serious equity stakes. China is thought to be more egalitarian than other developing countries and features less urban income inequality than rural income inequality. How will competition alter the picture? There will be winners and losers, both in terms of factor claims and in terms of regions and provinces. Income gradients will press people to migrate. This mechanism will take some steam off the inequality problem that surrounds free markets in China. Our main finding is that inequality would multiply under competition, but the predominant nature of inequality would change from the rural–urban divide to differences between the social classes. We measure inequality by the so-called Theil index, which admits a decomposition of inequality in within-group inequalities and between-group inequality. Normally there is one dimension of classification. Location, profession, or perhaps income itself, defines the subgroups. Our division of the population is three-way though, namely rural–urban, by province and by social class. There is a naughty methodological issue. We may, first, divide Chinese income in rural income and urban income and, second, break down further by province and social class, and then decompose inequality accordingly. Alternatively, we could first divide Chinese income in provincial incomes and then break down each in a rural and an urban component and further by social class. The problem is that the Theil decomposition is influenced by the order of classification. We shall present this slight theoretical problem formally and assess its magnitude. The remainder of the paper is organized as follows. Section 2 discusses the general equilibrium model (an input–output model with a nonlinear adjustment mechanism for the weights of the provinces) and its main outcomes (the competitive allocation, the shadow prices, and the implied migrations). Section 3 reviews the income inequality literature, extends inequality decompositions to multiple dimensions (rural–urban and regional), implements it for China, and investigates how the general equilibrium valuations alter the results. Section 4 draws conclusions. The details of the model are in Appendix A. Appendix B and Appendix C describe the sources of the input–output data and the population/personal income statistics, respectively. The resulting population and income tables are reported in Appendix D and Appendix E, where also a map of China can be found. Appendix F explains how the functional rewards (generated by the model) have been transformed to personal incomes.

In this paper we have presented an input–output model to reveal the potential of the Chinese economy, including the supporting shadow prices. The drawback of this approach is that a number of unrealistic assumptions have to be made. Commodities are classified in 30 categories, assuming perfect substitutability within categories and perfect complementarities between them, declaring each either perfectly tradable or not at all. A similar caveat applies to the classification of factor inputs. Trade with the rest of the world is not changed at all. Neither is technology. Subject to the limitations, the model indicates that perfect competition would restructure the Chinese economy severely along the following lines. If factor rewards would reflect provincial or national scarcities, the less skilled labor types would stand to lose and, therefore, inequality would mount. The flipside of this change is the potential for improvement of the average standard of living. Optimal specialization between provinces alone, may add about 23% to the level of domestic final consumption in China. Skilled workers, managers and technicians would move from Western and Central China to Eastern China. These flows would be more than offset by a flow of unskilled labor from Eastern China to Central China. Our finding indicates that Eastern China accommodates too many unskilled workers, relative to the competitive benchmark, and thus suggests that the Harris–Todaro mechanism operates in China. We have offered two three-way decompositions of Chinese income inequality in rural–urban, provincial, and social components, one pertaining to the observed data and the other to the income levels that would prevail under perfect competition. Competition would reduce the rural–urban divide (at least in relative terms) and dissolve the negative relationship between the level of development and income inequality. However, competition would skew factor rewards dramatically and thus create tension between the social classes. Compared to the competitive benchmark, Chinese policy is quite successful in checking inequality. As its economy is reorganized along competitive lines, skilled labor will prove scarce. It should be mentioned that this result is a consequence of our assumption of a fixed trade position and technology. Stimulating higher education and free world trade can alleviate the pressure.