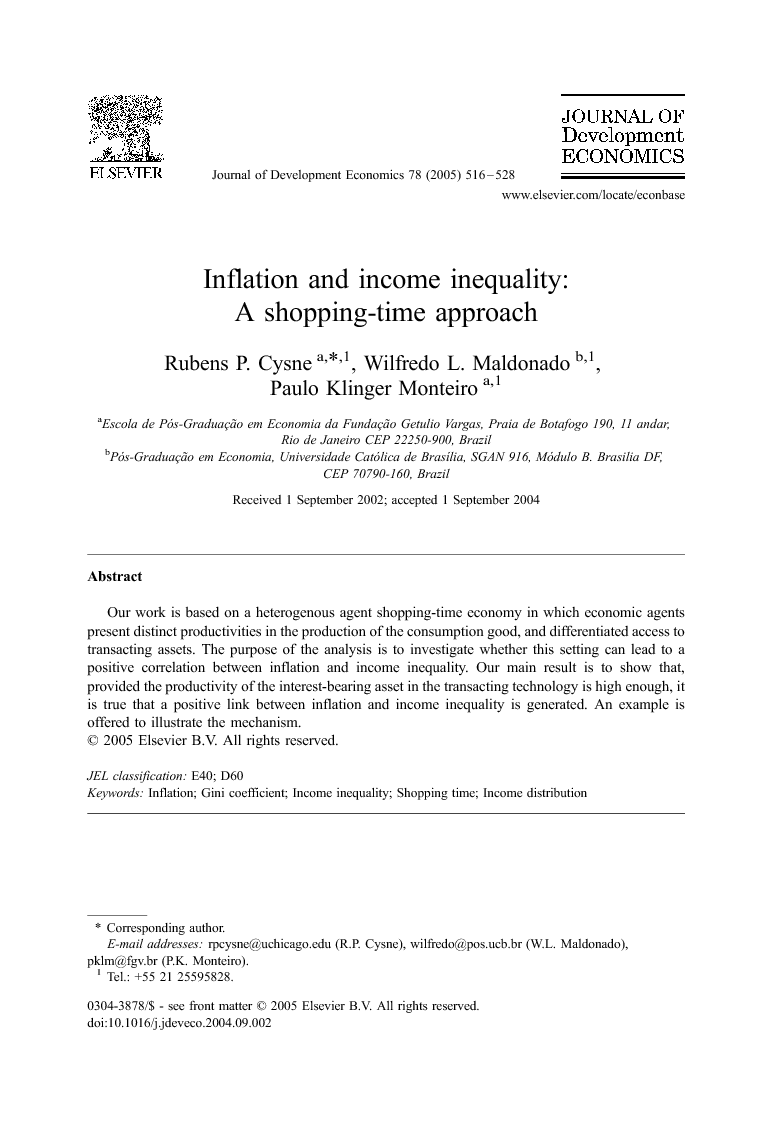 Our work is based on a heterogenous agent shopping-time economy in which economic agents present distinct productivities in the production of the consumption good, and differentiated access to transacting assets. The purpose of the analysis is to investigate whether this setting can lead to a positive correlation between inflation and income inequality. Our main result is to show that, provided the productivity of the interest-bearing asset in the transacting technology is high enough, it is true that a positive link between inflation and income inequality is generated. An example is offered to illustrate the mechanism.

Although there remains some controversy in the empirical literature relating inflation to income distribution (which Galli and Hoeven, 2001 call “the inflation–income inequality puzzle”), several works (e.g., Bulir, 2001, Romer and Romer, 1998 and Easterly and Fischer, 2001) present evidence correlating high rates of inflation with income inequality and/or poverty. This literature, however, still lacks optimizing dynamic models capable of delivering such a result from theoretical standpoints. The connection between inflation and income inequality is usually made, on descriptive grounds, by claiming that the poor,2 having more restricted access to interest-bearing moneys, end up paying a higher proportion of their income as inflation tax.3 Here we do not pursue such a channel directly. We maintain the hypothesis that the poor have more restricted access to financial assets. But instead of focusing on the differentiated (negative) real interest rates paid by transacting balances, we concentrate on the different shares of time allocated as shopping time, by rich and by poor, due to the existence of inflation. Since this shopping time is actually a measure of the welfare costs of inflation (Lucas, 2000 and Cysne, 2003), our approach can be interpreted as investigating whether the welfare costs of inflation, by affecting the poor more than the rich, can concentrate income. It turns out that, in equilibrium, the shopping time spent by consumers in order to save on the use of transacting balances is a mirror image of the amount of real interest payments on these same balances, on account of inflation, in the process of maximizing discounted utility. Intuitively, this fact, noted by Lucas (1993, p. 14, Eq. (4.14)),4 can be explained in terms of an equalization between marginal costs and marginal benefits. Formally, it is presented later, in a generalization of Lucas' argument, by Eqs. (15) and (16). We shall come back to this point in Section 5 of this paper. The fact that shopping times are, under the formalization described here, mirror images of inflation taxes implies that our results can be understood from two alternative angles: first, as a direct shopping-time reasoning for income inequality, based on the existence of inflation; second, as an indirect formalization of the old argument that inflation concentrates income, due to the fact that the poor pay more inflation tax than the rich. This second interpretation links our results to the empirical evidence and to the empirical relevance of the inflation–tax argument. The underlying intuition connecting inflation to income distribution, according to the shopping-time rationale, is that the higher the rate of inflation, the more important the lack of balance between rich and poor consumers, since the rich have access to better transacting technology. When the nominal interest rate is very close to zero, both rich and poor have the same shopping time, also very close to zero. The higher the rate of inflation and the interest rate, though, the higher the opportunity costs of holding monetary assets, and the more monetary assets are substituted by shopping time. One should therefore expect those with better access to transacting technology to do relatively better when inflation is higher, thereby concentrating income. We shall see that this intuition holds as long as the transacting technology satisfies a certain condition. An example at the end illustrates this shopping-time mechanism linking inflation to income concentration.

We have developed a simplified model, based on a shopping-time rationale, to investigate the effect of inflation on the Gini coefficient of income distribution. A basic assumption of the model is that some (cohorts of) consumers have access to a better transacting technology than others. Our main conclusion is that under such assumptions, a formal link between inflation and the Gini coefficient of income distribution can be theoretically proved. For transacting technologies in which the productivity of the interest-bearing asset is high enough, an increase of the inflation rate unequivocally leads to a deterioration of the income distribution. A link between our approach to the problem and the usual inflation–tax reasoning, which connects inflation to income inequality, has also been presented, as well as an example to illustrate our point.